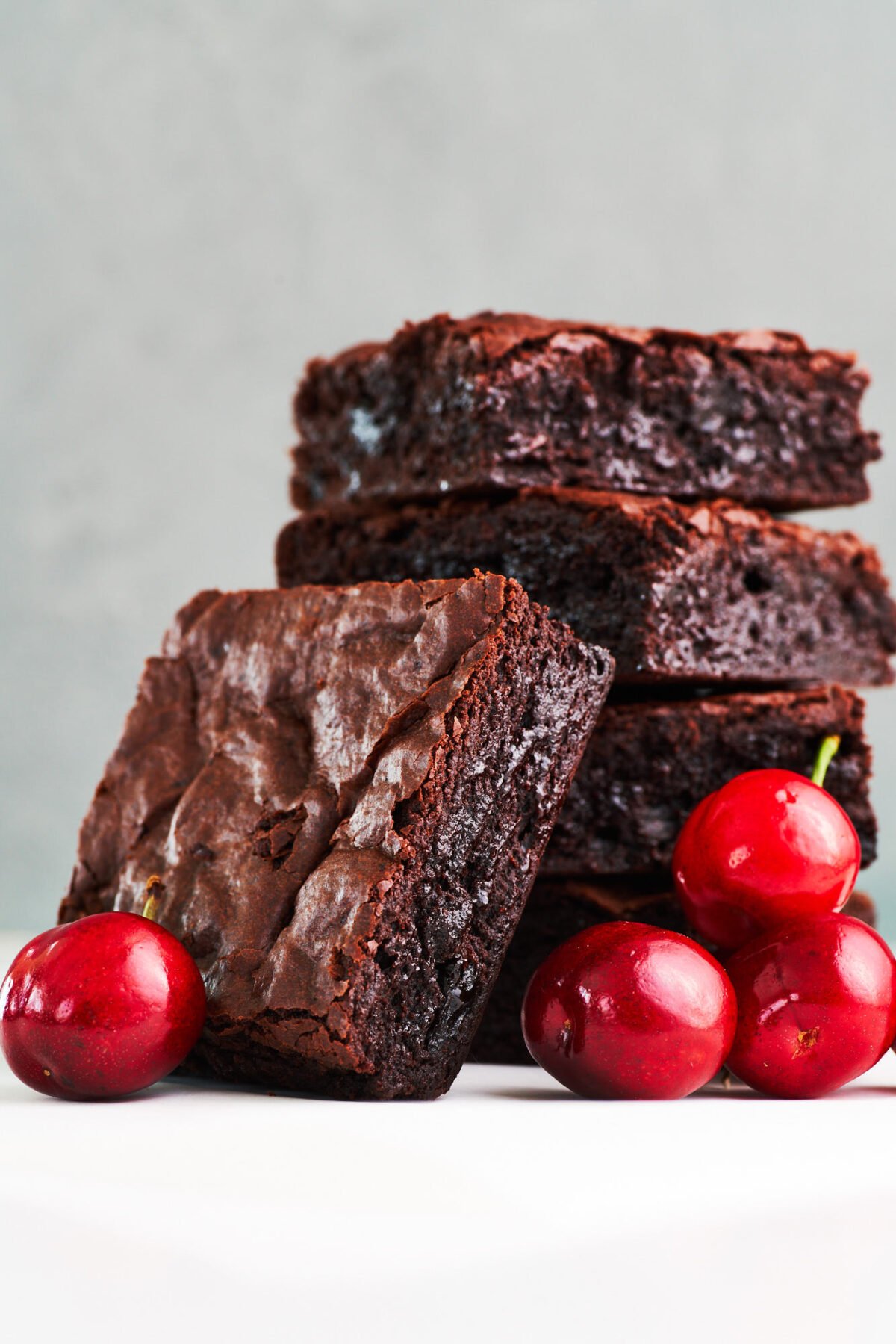 What makes this the Best Brownie Recipe?

I’ve been working on this brownie recipe for the better part of my adult life. That makes this recipe twenty-some years in the making, over which time, I’ve made hundreds of batches of brownies. I know the word “best” is pretty subjective, so let me start by explaining my perfect brownie.

For me, the perfect brownie has a paper thin crispy shell on top, with a gradual transition from cakey to fudgy towards the bottom. To achieve this, I’ve come up with the perfect ratio of sugar to flour to fat. The sugar content is what gives you the crisp shell on top while having a relatively high fat to flour ratio gives you a moist, dense crumb.

The mixing method can also impact the texture, and I’ve come up with a simple solution that borrows from my pancake recipe, emulsifying the fats with the egg, and then folding the wet ingredients into the dry ingredients. It’s a simple and fool-proof method of getting a dense, yet delicate crumb that’s fudgy when undercooked.

This leads me to the final factor that affects the texture, and that’s the cooking time. Fully cooking the batter will make a rich, dense brownie, but it will be cakey in the center, with an almost crisp edge. The trick to making it fudgy and a bit chewy is to undercook the batter. This gives you that perfect cakey crust on top, while the bottom will have a texture like cold peanut butter.

Since ovens vary wildly in accuracy as well as air circulation, it’s impossible to give an exact time for how long you need to bake the brownies. The best way to check is to use a toothpick and poke the brownie in the center. It should come out with a layer of thick pasty brownie batter on it. Since the brownies will continue to cook after you’ve removed them from the oven, it’s generally better to err on the side of undercooked, than overcooked. 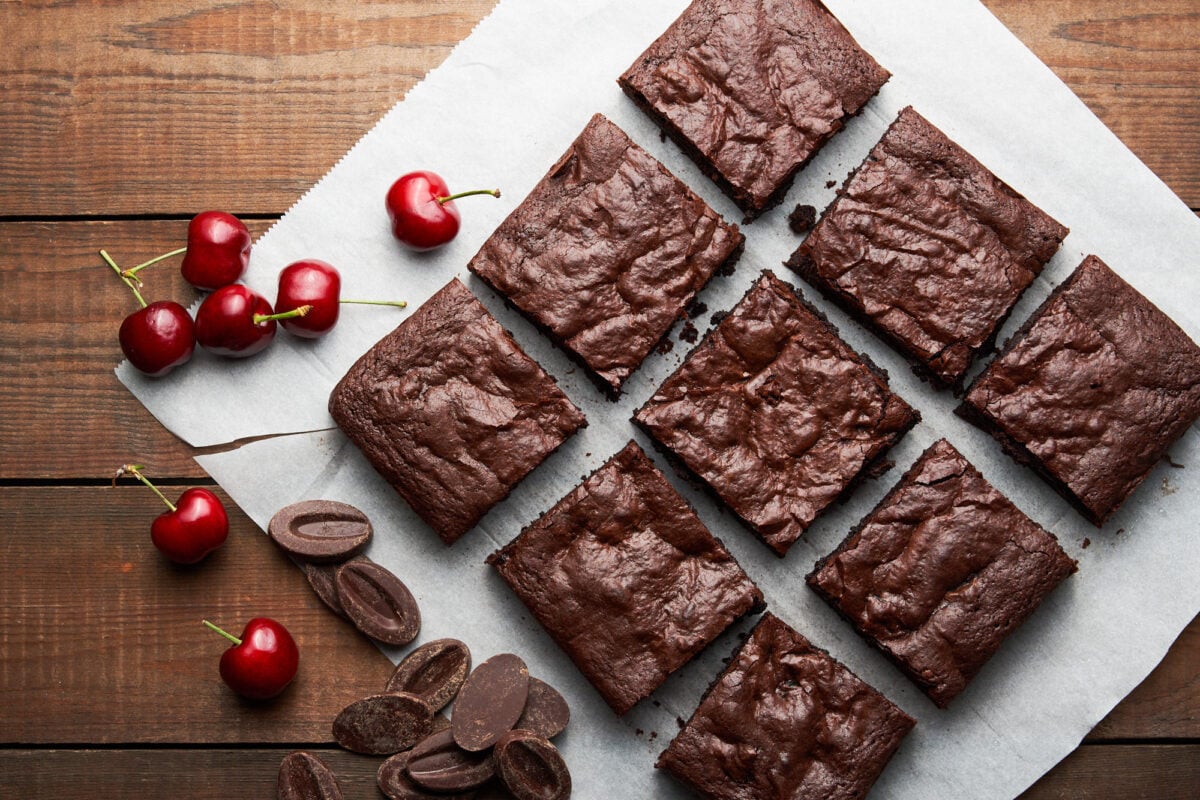 A brownie should first and foremost be about the chocolate, but if I’m in the mood for pure chocolate, I’d eat a chocolate bar. A brownie is a brownie because of the interplay of the other ingredients, whether it’s the caramelized crust of sugar on top, or the rich buttery center.

I think we’ve all been in a situation before where we had something amazing and asked for the recipe only to be presented with a mini novel. I don’t know about you, but when I’m craving brownies, I want a chocolate fix, STAT. With a little practice, you should be able to get these into the oven in under ten minutes, and unless you overcook them, they’re almost impossible to mess up. 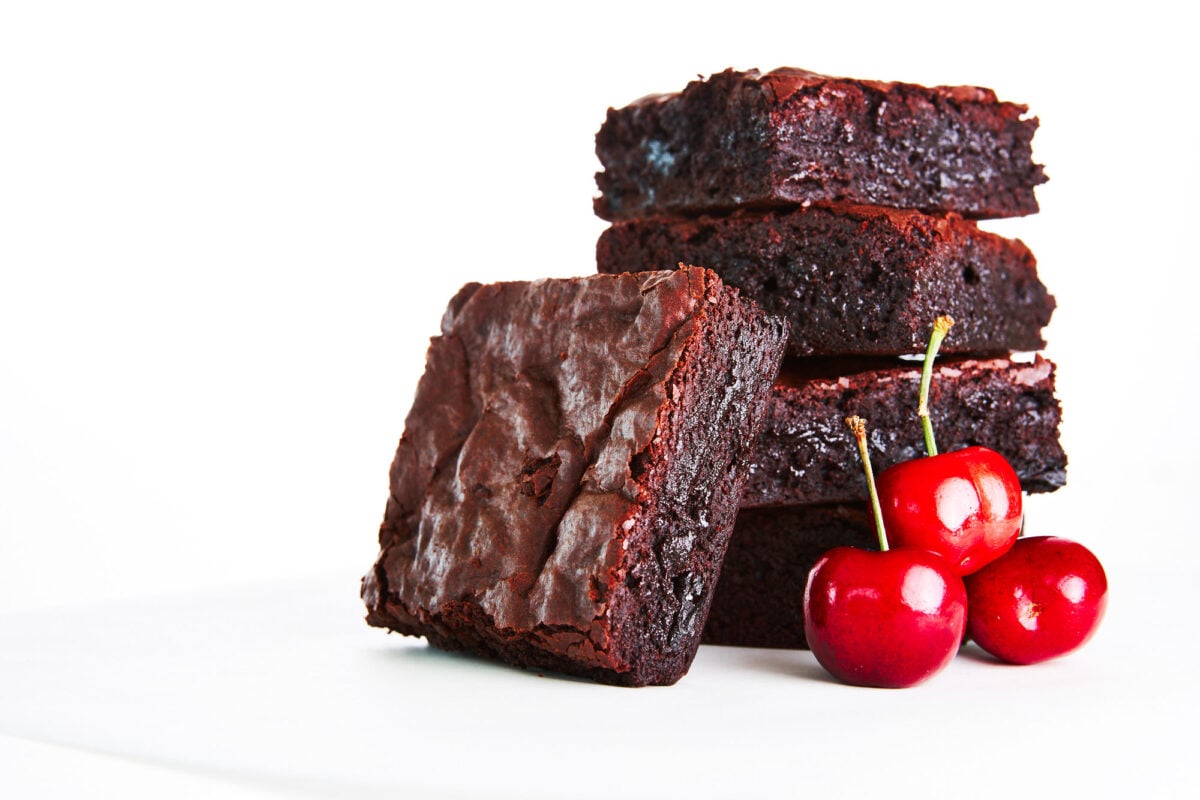 Ingredients for the Best Brownies

During my experimentation, I’ve tried all types of flours, from cake to bread flour, but I’ve found that plain old all-purpose flour works the best. It has just the right amount of gluten to give these brownies substance, without making them tough, or chewy.

The fat in brownies is responsible for keeping them moist and rich, but it’s also an opportunity to add more flavor. This is why I like to use butter and chocolate as my sources of fat. While ordinary butter will work, if you can find it, I recommend using cultured butter (sometimes called “European Butter”). “Cultured” doesn’t mean it’s fancy; it just means the cream has been fermented (like yogurt or sour cream), before being churned. The fermentation naturally creates a compound called diacetyl, which also happens to be the compound responsible for synthesized butter flavors (think movie theater popcorn).

Brownies don’t need to be leavened as much as cake, as they are meant to be dense. That being said, you do need to add a little bit of leavening, or you’ll end up with a brick of cloyingly sweet chocolate. I primarily rely on eggs to provide the leavening power, with just a touch of baking powder, which gives the extra oomph needed to leaven this very heavy batter.

I also add some melted dark chocolate, which is essentially adding a chocolate flavored fat. I used Valrhona Guanaja, which is a 70% chocolate, but you can experiment with other brands and percentages to find one that works for you.

This is technically optional, but honestly, I think this is part of what makes these brownies the best. When you make these without the cherries, the first bite (and even the second) is delicious, but by the third bite, you start to get chocolate overload. By adding some dried cherries, you get some sweet tart cherries every few bites, which balances out the richness. I like to rehydrate them in a bit of cherry liqueur, this not only amplifies their cherry flavor, it also plumps them up, so they are tender and juicy when you bite into them. I’ve tried this with a bunch of different dried fruit and liked cherries the best, but you can experiment with other fruit to find the perfect one for you. 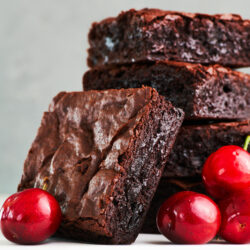