Maybe it’s the name (can you think of a more decadent sounding name?), or perhaps it has a flavor profile that appeals across cultures. Whatever the reason, butter chicken has managed to find its way around the globe, showing up on menus from Toronto to Tokyo to Turin.

While I love butter chicken, I have a few problems with many restaurant versions. The first is that it’s often sugary sweet. The second issue is that it’s often made with leftover tandoori chicken, which by the time it makes it into the butter sauce, could make the cut for an NHL approved hockey puck.

If you take the time to caramelize the tomatoes (yes, tomatoes!) this dish has a natural sweetness that really doesn’t need any added sugar. The sweetness along with the pleasant tang from the yogurt marinated chicken balances out the rich creaminess from the butter and cream. Also, if you’re making this at home, you have the luxury of under-cooking the chicken on the grill, so that it doesn’t end up overcooked in the sauce.

You might be wondering why you have to go through the effort of reducing the tomato puree since a bunch of liquid gets added back in at the end. Those of you who have made French Onion Soup in the past, probably know the magic that happens as the Maillard reaction transforms the pungent onion into a sweet and infinitely complex melange of flavors as the sugars reduce. But who ever said that onions were the only vegetable you could do this to?

Once the tomatoes have reduced down to a glossy paste, I whisk in some cashew milk. This not only provides a creamy base which allows me to cut down on the amount of cream I add, it also gives the sauce body. Lastly, I like to strain the spices out of the sauce, making the finished butter chicken easier to eat (there’s nothing worse than biting into a fibrous cardamom pod or a mouth numbing clove) 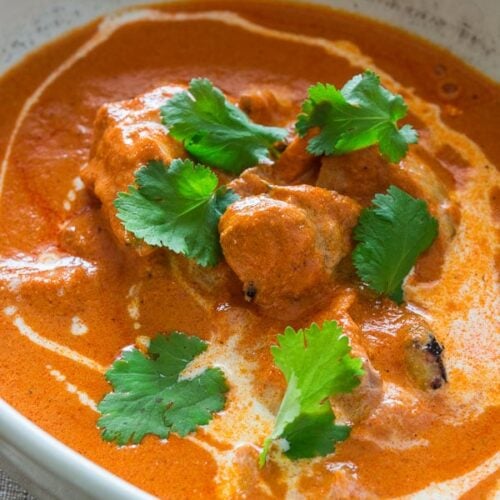 What do you think?129 Cancel reply