Stroganoff is one of those foods that have transcended geographic and culinary boundaries, like spaghetti with meat sauce or fish and chips, it’s become a dish that’s enjoyed around the world. Unsurprisingly this also means that there are dozens of local adaptations of the dish, with some versions including ingredients like shrimp and soy sauce! Even within Russia, where the dish is from, it’s come a long way from the original recipe found in the 1871 edition of A Gift to Young Housewives, which called for floured beef cubes sauteed and paired with a sauce made from mustard, bouillon and a bit of sour cream (without tomato, onions or mushroom).

While most variations continue to use beef, I tend to use whatever meat I have in the refrigerator, and for me, this often means it gets made with chicken. I’ve seen versions of Stroganoff made with literally dozens of ingredients, but I believe it’s possible to make a delicious umami rich chicken Stroganoff from just a handful of basic ingredients prepared with a little thought.

The first thing is to use quality ingredients. This may sound obvious, but since the chicken is the star of the dish, you want to use a flavorful cut from a flavorful bird. Breast meat just won’t cut it, as it will not only dry out while it’s simmering, it also doesn’t have a lot of flavor to begin with. That’s why it’s important to use thigh meat. What the bird was fed and how it was raised will also make a huge difference in the flavor of the chicken, which is why I’d encourage you to look for chicken from a small local farm.

The second thing is to take the time to really brown the chicken, mushrooms and onions. Cutting corners, like turning up the heat, or not allowing the ingredient to fully brown will result in a flat tasting Stroganoff without the deep umami, mild sweetness and earthy complexity imparted by these ingredient as they caramelize. The mushrooms in particular can be a bit tricky, because they will initially brown on the outside before releasing a bunch of liquid, and then eventually turn a mahogany shade of brown after the liquid evaporates. If you stop after the first browning, they will never live up to the intensely flavorful potential they possess.

Slicing the mushrooms thinly is a good way to get them to brown quickly, but the downside is that they don’t add much to the sauce from a texture perspective when they are cut so small. Quartering them on the other hand preserves their texture, but it will take a ridiculous amount of time to properly brown them. My compromise is to slice them about a 1/4-inch thick. Since slicing them gives them an even thickness, they brown relatively quickly, while retaining their great texture.

Given the time you’ll spend browning (about 30 minutes), this isn’t a quick meal. Still, it’s totally possible to put this Chicken Stroganoff together in under an hour and for your extra effort, you’ll be rewarded with a rich, savory stew that tastes like you spent all day working on it. 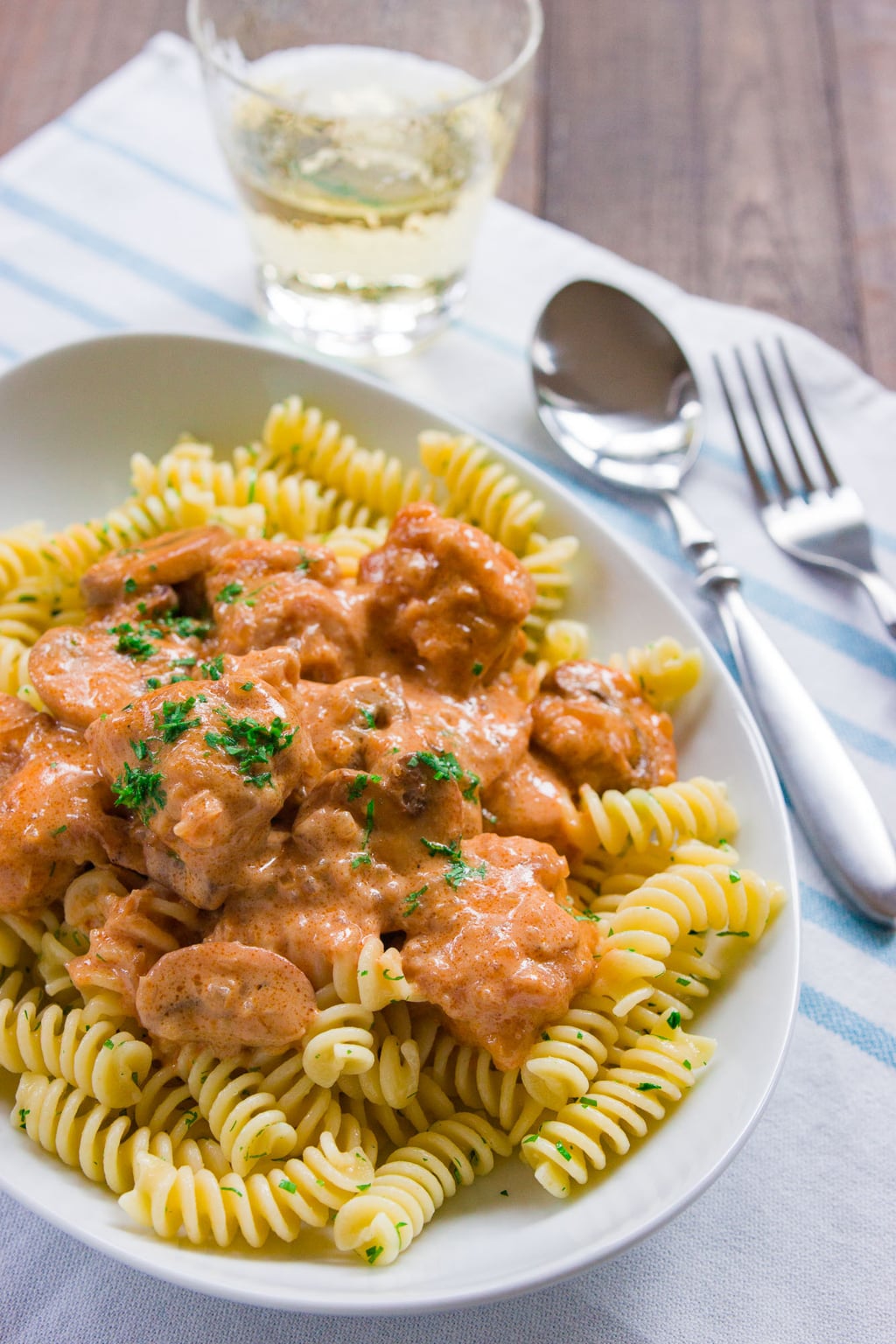 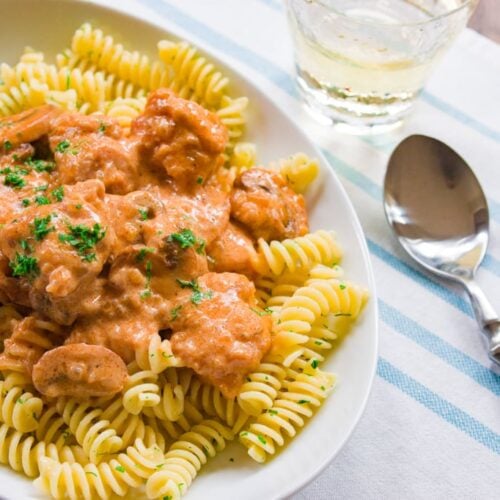