Gobi 65 is a delectable cauliflower-based variant of Chicken 65, the Indian equivalent to Buffalo Wings, from Chennai. Like many Indian dishes, there are several colorful stories about where the “65” comes. Whether you believe it was invented in 1965, got its name from the number of chiles in the dish, or believe that “65” was the menu number for the original dish, one thing everyone can agree on is that it goes great with an ice cold beer.

Instead of the usual thick batter, which can get greasy, I made a lighter tempura-style batter out of flour and potato starch. The result, is an almost naked cauliflower that’s tender and moist on the inside and impossibly crisp on the outside. To ensure it stays crisp I borrowed the double fry technique from my fish and chips, first frying the cauliflower at a lower temperature, before crisping it at a higher temperature.

In my version, the fried cauliflower, gets tossed with some tempered spices and aromatics such as star anise, kalonji seeds, garlic and ginger. Red onions thrown in at the very end takes the raw edge off of them, while lending their sweet crispness to the medley. Together with the crisp savory florets of cauliflower, this makes for an unbeatable combination that will have you pecking at the last flavorful crumbs at the bottom of the plate.

As for the chili flakes and chili paste, I used aleppo chili flakes and sriracha because it’s what I had on hand, but whatever you have in the pantry will work just fine, just be sure to adjust the amount to suit your heat tolerance.

I like serving my Gobi 65 with a chili sauce like sriracha, but it also goes great with a yogurt-based raita. 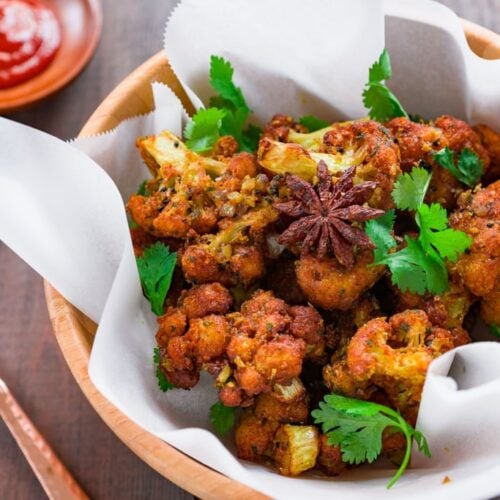