After a week preparing several 120 quart vats of Snow Crab congee at a restaurant, I’ve become a bit of an expert at shelling crab. That’s why it was a little ironic that Alaska Seafood, offered to send me a few cases of wild salmon, black cod and Snow Crab to try out. Alaska Seafood is not a store, or even a brand you can look for. The only thing they’re selling is a promise that the seafood from Alaska is wild, sustainable and healthy. If the quality of the seafood I received is any indicator it looks like they’re doing a pretty good job managing the fisheries up there.

To be honest, I was excited about the salmon and the black cod, but given the fact that crab legs were making cameos in my dreams, I wasn’t sure how much I wanted the crab. Of course when the box showed up with a bag full of gorgeous legs, I promptly gave myself a mental flogging for even having such thoughts. Not only were they delicious, it gave me a chance pass on my hard-earned technique to all of you, so that if you ever find yourself having to crack hundreds of crab legs, you’ll be well prepared!

Like any new critter you’re going to dissect, it helps to first know a bit about a crab’s anatomy. We all know that crab are held together by an hard shell, but did you know that the exoskeleton attaches to transparent strips of cartilage that run down the center of the leg muscles holding the meat in place? Without these attachments, the meat would float around freely in the exoskeleton. Not so good for the crab, but perfect for someone trying to get its meat out of the shell.

As it turns out, if you crack the joints of the lower legs in the right direction, the meat clings to the cartilage enough that you can remove the meat from the shell still attached to the cartilage. For the upper parts of the legs, the meat doesn’t come with the cartilage, but once you’ve removed it, it’s simply a matter of making a hole big enough for the meat to fall out of. This is the basis for my whole technique.

The tricky part is knowing which direction to split the joints to remove the cartilage. Generally I’ve found that by splitting the joints downwards with the white part of the leg facing up you have a pretty good chance of getting the cartilage out of the legs.

Once you have the leg segmented, recover the bits of meat clinging to the cartilage, and then cut the end off of each segment of leg that still contains meat. You can also use the back of a knife like in the video, but be very sure you’re using the blunt side, otherwise you’ll end up trimming more than the end of the crab off! Now you should be able to hold the segment vertically in one hand and give it a few firm taps on your other forearm to eject the meat from its shell.

For the claws, the anatomy may be a little different, but the principles remain the same. There’s no cartilage at the joint for step 1, so just break this. For steps 2 and 3, the joints have cartilage, so break downwards with the white part facing up. Then break the mobile side of the claw off (step 4) and pull the cartilage out of the claw. Then you can crack the two claw segments with the back of a knife and pull the meat out. For the upper segment you’ve already removed the cartilage, so you can use the same technique as the upper leg, cutting an opening large enough to allow the meat to drop out (step 6)

Just in case the diagrams aren’t enough, my alter-ego Crab Ninja has prepared a video for you showing the full technique for both the claw and the leg.

My favorite way to have Snow Crab legs is to steam them in sake. It’s easy, and infuses the meat with a wonderful nutty aroma while making the meat warm and fluffy. If you don’t have sake, you can use wine, whiskey or water with some lemon zest in it. Basically the idea is to gently heat the crab using aromatic steam. 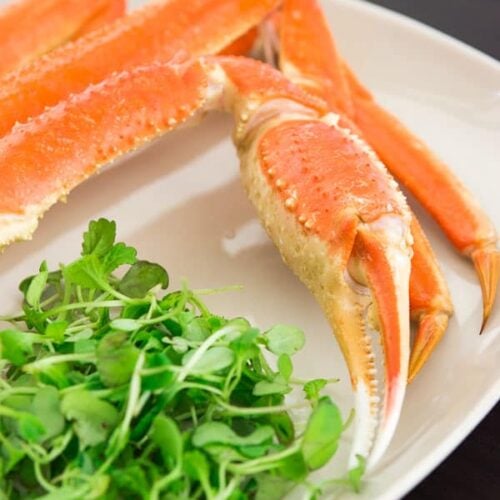 How to Shell Crab Legs

How to Shell Crab Legs

How to Shell Crab Legs Video