What is a Japanese Chicken Sandwich?

Like most countries, Japan has several types of chicken sandwiches, including Chicken Katsu sandwich and Chicken Salad sandwich, but the closest thing to the ones at Chick-fil-A and Popeyes is a fried chicken sandwich stuffed with Karaage.

What kind of chicken do you use for a chicken sandwich?

Both Chick-fil-A and Popeyes use breast meat for their sandwiches, but I suspect they’ve been heavily processed, or at the very least brined. For my sandwich, I prefer using thigh meat which tends to be more juicy and flavorful. I also like to use skin-on chicken as the fat in the skin renders out while frying, leaving it ultra-crisp. It also helps insulate the meat on the skin side from the high-temperature oil, which keeps the meat from getting dry.

Is breast meat okay for a chicken sandwich?

This is a matter of personal preference, but thigh meat will always be juicer and more flavorful as it contains more fat, and the muscles tend to get more exercise. Thigh meat is also more forgiving, especially if you don’t have an instant-read thermometer to check the temperature of the chicken.
That being said, you can still make breast meat work, by cutting or pounding it to roughly the same thickness, and being very careful not to overcook it.

What do you coat the chicken with?

Karaage (a.k.a. Japanese fried chicken) is chicken that’s been marinated with soy sauce, sake, and ginger and then coated in potato starch before frying it. Potato starch has relatively large granules and a high ratio of amylopectin to amylose, which gives it a unique texture as a coating that ends up being quite similar to potato chips when fried. Unlike wheat flour or cornstarch which tends to end up more crunchy than crispy, potato starch creates an airy crisp coating that’s a delight to bite into. 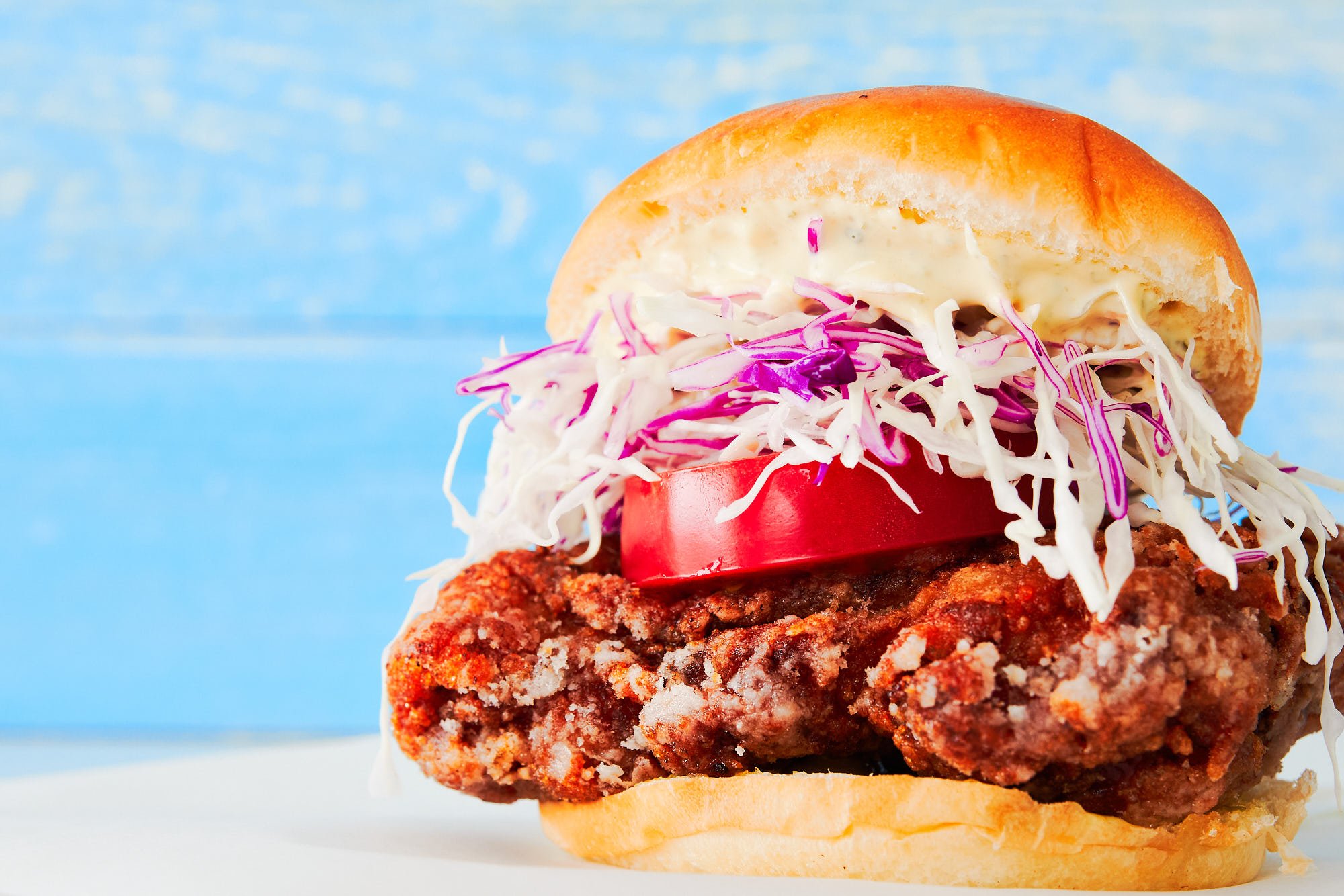 What’s the proper bread for a Japanese Chicken Sandwich?

Although Japan is traditionally a rice and noodle culture, western-style bread has been around for at least three hundred and fifty years. Over the past hundred and fifty years, eating bread has gone mainstream, and you’re more likely to find a bakery than shops selling rice. Butter rolls are a staple in Japanese bakeries, and they have a light, fluffy texture that’s similar to brioche. They’re most commonly shaped like croissants, but you can also find dome-shaped ones that look like a hamburger bun. Similar bread is often available in Asian bakeries, but if you can’t find one near you, you can substitute a brioche bun or a challah roll.

What else goes into a Japanese Chicken Sandwich

There are no hard and fast rules, here, but after trying many different combinations, I like spreading a mixture of Japanese mayonnaise (Kewpie) flavored with yuzu kosho (yuzu chili paste) on the buns. Kewpie is a little more tart than American mayonnaise and has a more eggy flavor, which makes it closer to a homemade mayo or aioli. Yuzu kosho is a chili paste that’s made with chili peppers and yuzu zest, along with salt. It’s wonderfully fragrant and imparts a spicy kick to the sandwich without being overtly spicy.

To balance out the savory chicken, I like to include a thick slab of tomato, which adds a hint of balancing sweetness to sandwich, while making it even juicier.

In Japan, fried foods are often served with a thinly shredded cabbage salad, so it’s the natural choice to include in the sandwich. When soaked in water and sliced into thin threads, it makes for a refreshing addition to the sandwich which works hand-in-hand with the yuzu mayo to make a kind of coleslaw in your mouth. 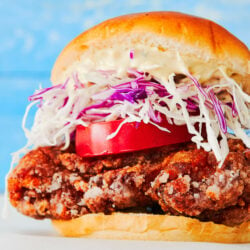