Matcha may be better known for ice cream and lattes, but the powdered green tea leaves make for a stunning brownie (or greenie). These vibrant green tea brownies are made with white chocolate and matcha powder have a marvelous verdant flavor with just a hint of bitterness like a really good dark chocolate.

If you like green tea, these sweet treats are the best thing since green tea ice cream, and they make for a fun addition to a basket of holiday baked goods. It’s also worth noting that one of these brownies contains more caffeine than a cup of tea, yet it won’t make you jittery like a cup of coffee will, thanks to a compound called theanine.

How to Make Matcha Brownies

The first thing you want to do is line an 8×8-inch square pan with parchment paper. This makes it much easier to get the green tea brownies out of the pan while they’re still hot, which prevents them from overcooking. I have an easy technique for doing this, which you can check out in the video below.

Next, you want to sift the flour, matcha, baking powder, and salt and then whisk them together until the mixture is uniform in color. Matcha tends to form clumps, so this is an important step to ensure you don’t bite into a lump of bitter green tea powder in your brownie.

To prepare the liquid ingredients, I start by melting the white chocolate and butter in a microwave set at 300 watts for about a minute and a half. You can also do this by putting a heat-proof bowl of a pot of simmering water. Either way, you need to be careful not to let the mixture boil, or the fat will separate out.

Once the chocolate mixture is nice and smooth, beat the eggs into it using a whisk until it’s uniform in color.

Now you can add the sugar and vanilla extract and whisk it all together until it’s thick and smooth.

Pour this mixture into the bowl with the flour mixture and fold it together with a spatula until it’s free of lumps. Be careful not to overmix the batter, or it can make the brownies tough.

Scrape the batter into the prepared pan and level off the top. Bake the Matcha Brownies for 18-20 minutes. I usually let it go until the edges are slightly puffier than the center. This will result in a very dense brownie and fudgy in the center with crisp cakey sides. It’s important to note you can’t use the toothpick method to tell when it’s done because the center should be a little gooey still if you want a fudgy brownie.

When the green tea brownies are done to your liking, remove them from the oven and then immediately transfer them out of the pan and onto a cooling rack to prevent them from getting overcooked from the pan’s residual heat.

When the brownies have cooled down completely, you can slice them into bars or squares using a sharp knife.

What are Matcha Brownies?

Matcha brownies are white chocolate blondies with powdered green tea added to give them their verdant color and green tea flavor.

How do I get my brownies as green as yours?

The color of your brownies is going to depend largely on the quality of the matcha you use. I used ceremonial grade matcha, which is premium matcha that’s intended for drinking. It tends to have a much more vibrant green color than culinary matcha tends to have a brownish tint and more muted color. Matcha also discolors as it oxidizes, so if you want a bright green color, make sure you are using the freshest matcha possible.

Does matcha have caffeine?

Is matcha good for you?

These brownies have a ton of sugar and fat, so you probably don’t want to eat the whole pan in one sitting. That being said, matcha contains a ton of amino acids, including an analog to glutamate called theanine. Studies have shown this compound can increase serotonin, dopamine, and GABA levels in your brain, lowering stress and improving cognitive function.

How to make vegan Matcha Brownies?

You can make this vegan by substituting vegan butter or coconut oil for the butter and vegan white chocolate for the white chocolate. The eggs can be replaced with a flax or a chia egg. 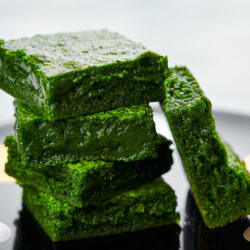