Despite being Japanese, I used to hate eating cooked fish as a child. I think this may have had something to do with the fact that the only way my mother ever prepared it was overcooked, with a dash of Season All. It’s not that she was a bad cook, she did teach me to cook after all, but years of cooking for an apathetic family drained her of any passion she once had for it, and the indifference was especially apparent with fish.

Her aquatic victim of choice was almost always salmon, which is probably why I steered clear of cooking or eating salmon until very recently. The one redeeming quality of her tough grayish pink block of fish was the crisp golden crust of savoury Season All. It’s a seasoned salt that includes flavour enhancers like celery, garlic and onion powder. I really loved this stuff growing up and would even sneak into the spice cabinet on occasion and sprinkle some on my hand to eat.

You’re probably thinking I’m quite odd after that one, but here’s another quirk of mine. I like to try things I know I don’t like from time to time to see if my disinterest has waned over time. In the case of salmon, I had an amazing slow roasted salmon last year that changed my mind.

While I was out hunting and gathering for dinner the other day, I noticed some gorgeous wild salmon on sale and I found myself craving that crisp Season All crust. Somehow using a pre-made spice blend just didn’t seem right, so I started ruminating about how I could add a crisp flavourful crust to the salmon without cheating. Grated dry cheese would have been nice from a flavour perspective, but the high heat required to crisp the exterior without overcooking the interior would have rendered the cheese black. For a brief moment I actually contemplated sprinkling just a bit of MSG on the fillets…. sacrilege! Besides, I don’t even own any MSG.

It was around then that I started thinking of other ingredients that are filled with umami enhancing glutamates. I remembered a few recent successes using shiitake powder in chicken sausage as well as a ragù and wondered what it would taste like encrusted on the salmon. Problem solved!

The mushrooms did their job creating a crisp crust of pure flavour, concealing that “salmon flavour” nicely and adding some depth and substance to the light salad. With crisp strips of sunchoke, mizuna greens and segments of grapefruit, all dressed in a very simple lemon vinaigrette, this salad has something for everyone. 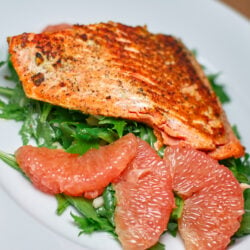