Like many of the best comfort foods, Chan Chan Yaki was created as an easy delicious meal to feed large numbers of working-class people. In this case, the dish was created to feed fisherfolk from Ishikari, which is known for its salmon. These days it’s a mainstay of festivals where it’s prepared on large steel griddles called teppan, and the name is an onomatopoeia for the sound the metal spatulas make as they hit the grill. I’ve adapted the dish to make it easier to make at home while ensuring you end up with perfectly cooked salmon that practically melts in your mouth.

How to Make Miso Butter

The key to making miso butter is to make sure your butter has had an hour or two to come up to room temperature so that it’s very soft; otherwise, you’re going to need to mash the ingredient together with the back of a fork.

Once the butter is soft enough, add it, along with the miso and sugar, to a bowl and mix the three ingredients together until it’s smooth and uniform in color.

Miso butter can be stored in a sealed container in the fridge for several weeks, so you can make a big batch in advance. The only problem is that you need to spread it onto the salmon, so you’ll have to take some of the miso butter out of the fridge in advance to soften it. That being said, other uses such as stir-fries and pasta don’t require it to be softened, so it can still be worth making in advance.

How to How to Make Chan Chan Yaki

Heat a pan that’s large enough to hold the vegetables and salmon over medium heat. I recommend using a deeper one such as a “chef’s pan” if you have one. Add the oil and all of the vegetables (except the scallions), and stir-fry until the cabbage has wilted.

Place the salmon on the veggies and then pour the sake on top of the vegetables. Cover this immediately with a lid. Adjust the heat to maintain a gentle simmer and set a timer for between eight to ten minutes. How long your salmon takes to cook will depend on how thick it is, so if you’re unsure how long it will need, you can use an instant-read thermometer to test it after eight minutes. If you don’t have one, you can also try and cut into the thickest part of the filet with a fork. If it flakes apart easily, it is cooked.

The vegetables under the salmon should be pretty juicy, but if you have an excess of water, you can turn the heat up at this point and boil some of the liquid off.

Garnish the Miso Butter Salmon with chopped scallions and black pepper, and serve with rice.

What is Miso Butter Salmon?

Miso Butter Salmon or Chan Chan Yaki (ちゃんちゃん焼き), is a Japanese dish that originated in the Ishikari region of Hokkaido. It’s an area known for its salmon, and this dish was originally prepared in steel drums to feed large numbers of fisherfolk. Traditionally, it’s made by stir-frying vegetables such as cabbage, onions, and carrots and then placing a salmon filet on top. This is then steamed with a sauce made from miso, sugar, and sake before being finished off with butter.

What does Chan Chan Yaki mean?

The traditional method for making Chan Chan Yaki is to stir-fry and steam the vegetables, salmon, and miso on a large steel griddle called a teppan. When the dish is almost done, the cook uses two metal spatulas to break up the whole fillet and chop up on the vegetables. The sound of the spatulas striking the flat top makes a chan-chan-chan sound, which is where the dish gets its name.

How do you pronounce Chan Chan Yaki?

Can Chan Chan Yaki be made with other proteins?

This method works for other proteins such as chicken or even tofu. The only difference is that the cooking times may vary depending on the thickness and type of protein you use. 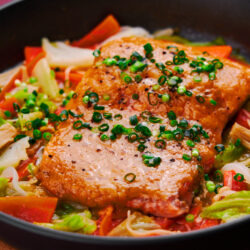 What do you think?22 Cancel reply