Teriyaki Salmon (照り焼きサーモン) is one of those dishes that are more popular in the US than it is in Japan. Although we make teriyaki with fish here in Japan, it’s usually made with buri (mature yellowtail) instead of salmon. That being said, Teriyaki sauce is delicious on almost anything, so I want to show you an authentic way to make it a lot easier than most recipes I’ve seen. I also have a trick for you that ensures your salmon turns out perfectly cooked and tender while becoming enrobed in a luxurious teriyaki glaze.

Authentic Japanese teriyaki sauce contains equal parts of soy sauce, sake, and sugar (and sometimes mirin). There’s no fruit juice, vinegar, sesame oil, garlic, or anything else in it. The reason for this is that teriyaki means “glossy grilled,” if you add ingredients in your teriyaki sauce that makes it cloudy or lumpy, it’s not teriyaki.

We also don’t add starch or any thickening agent to the sauce in Japan because it gets its thickness from the sugar caramelizing. When I’m making Teriyaki Salmon, I like adding a bit of ginger to the sauce to smooth over any fishiness, but instead of adding the ginger directly to the sauce, I grate it and squeeze out just the juice. This eliminates any particulate matter that will ruin the shininess of the sauce.

As for mirin, if you can get real mirin, you can add an equal portion of it to your sauce. I usually skip it because most mirin on the market is just corn syrup and alcohol with flavorings.

If you really want to add things like scallions or sesame seeds to your sauce, just sprinkle them on top of your Teriyaki salmon after cooking.

How to Make Teriyaki Salmon

The first thing you want to do is grate the ginger, and then squeeze the resulting ginger pulp to extract the juice. Add about 1/4 teaspoon of ginger juice to the sake.

To prepare the salmon, remove the skin and any pin bones, and then slice it into filets that are about 1 to 1.5-inches thick. Use paper towels to ensure the surface of the salmon is dry. Add the potato starch to a tea strainer and give every surface of each piece of salmon a thin, even coating of starch.

Put a non-stick frying pan over medium heat and get it relatively hot but not scorching. Using a pan that’s too hot will cause the outside of your salmon to get tough. Add some vegetable oil to the pan and then the salmon. Let this fry undisturbed until it’s the salmon is opaque about a third of the way up the sides.

Flip it over and cook the second side until it’s also cooked about a third of the way through. You don’t want to fully cook the salmon at this point as it will cook some more when we glaze it.

Transfer the salmon to a plate and use paper towels to wipe out all of the pan’s oil. This not only reduces the fat content, but it also helps ensure the sauce stays clear.

Add the sake and ginger mixture, soy sauce, and sugar to the pan and stir this until the sugar is fully dissolved, and the teriyaki sauce is boiling. Return the salmon to the pan and flip it over repeatedly to coat it with the glaze.

The Teriyaki Salmon is done when you have a thick glaze around the fish, and the sauce has started to caramelize.

What to Serve with Teriyaki Salmon

I like to serve Teriyaki Salmon over a bed of plain rice. This allows you to drizzle any remaining sauce on top of the salmon, which percolates down onto the rice. For a pop of color and nutrients, I usually add some steamed green veggies such as asparagus, snap peas, or bok choy that I season with a little sesame oil, salt, and white pepper.

What if I can’t get/drink Sake?

Sake contains a high concentration of amino acids, which are responsible for giving foods the taste of umami. This is what gives authentic Japanese teriyaki sauce it’s depth of flavor. Since the sauce is boiled until it is significantly reduced, nearly all of the alcohol will burn off, so it should not be a problem for children. If you are concerned with residual alcohol in the sauce, consider this. Alcohol is a natural byproduct of fermentation, so most things that have undergone some fermentation, such as ripe fruit, yeast-leavened bread, soy sauce, and miso, contain some alcohol. If you absolutely cannot find it, the best substitute is water. It will not be quite as flavorful, but it is a better substitute than fruit juice, or wine, which is acidic and will make the sauce taste sour.

Can I Grill Teriyaki Salmon

The high temperatures involved in grilling tend to render the salmon tough and chewy on the outside, which is why I don’t usually recommend it. The only exception is if you have cedar planks. This protects the salmon from the direct heat of the grill, and the smoke that comes off the plank gives it a wonderful aroma. To make it on a plank, place the starch coated filets on a plank that’s been soaked in water overnight. Grill the plank until the salmon reaches an internal temperature of 130 degrees F. For the sauce, just add the sake, ginger juice, soy sauce, and sugar to a pan and reduce it until it forms a thick glaze. Brush the glaze onto the salmon as it cooks.

Can I Bake Teriyaki Salmon

Yes, this can be baked in an oven, but it’s going to take significantly more time and effort than doing it in a pan and there isn’t any benefit unless you are making a very large quantity. In case you’re wondering, there is no health benefit, since the oil you use to pan-fry this (and even some that renders out fo the salmon) gets wiped out of the pan before adding the sauce.

If you still want to do this in the oven, it’s similar to the grilling method above, but you want to use a low-temperature oven (~250 F) to roast the salmon. Then you can reduce the sauce ingredients in a pot into a thick glaze and then brush the tops of the salmon several times with the glaze while it bakes.

Should I marinate the Salmon in teriyaki sauce?

No, I do not recommend marinating the salmon in teriyaki sauce as the sugar will cause the salmon to burn. 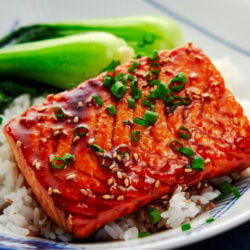