As someone who can’t put down a stack of pancakes without some ham, bacon or sausage to disrupt the sweet monotony, I love contrasts in food. While a delicious aroma or stunning presentation may entice you to take the first bite of something, it’s the contrasts that keep you going back for a second and third bite.

That’s why the Monte Cristo is one of my favorite sandwiches. With ham, turkey and Emmentaler(swiss) sandwiched between two slabs of french toast dusted with powdered sugar, the sandwich is then slathered with strawberry jam before getting stuffed into your mouth. It’s an incongruous sandwich full of titillating juxtapositions: sweet yet savory, fluffy yet custardy, crispy and yet tender; all in one bite! A Monte Cristo embodies the spirit of brunch, and is one of my favorite meals when I wake up far too late in the day to call my first meal “breakfast”

Despite all its splendor, the Monte Cristo somehow didn’t make it onto Thrillist’s list of the 50 greatest sandwiches ever known to man; disqualified on a technicality. As they put it: “If you can’t pick it up with your hands, it isn’t a sandwich.” I was annoyed at first, but upon further reflection they make a good point. Because a Monte Cristo uses french toast instead of regular bread, the sandwich is often oily and limp, making it a challenge to with two hands, let alone one. Add to that, the strawberry jam, and you have a hot sticky mess on your hands that doesn’t exactly embody the spirit in which the sandwich was created.

My french toast recipe uses a little flour to help keep the exterior from becoming soggy. While it does keep the french toast from going limp, it never quite manages to make the outside crisp. Taking this logic to the next level, I wondered what would happen if instead of adding flour to the custard, I dusted the exterior of the soaked bread with flour. As it turns out, it works…. brilliantly!

French toast made in this way ends up soft and custardy on the inside and cracker crisp on the outside. Instead of a floppy “sandwich” that needs to be eaten with a fork and knife, a Monte Cristo made in this manner, is a sandwich that can be eaten single handedly, while still retaining all the marvelous characteristics that make it so good in the first place. To help hold things together on the inside, I use a double layer of cheese on either side of the ham as a glue that keeps the insides from spilling out as you eat.

As for the bread, I recommend using a cheap grocery store “French” bread with a crisp rather than crunchy crust and airy wonderbread center. You know, the kind of bread that would get you lynched by an angry mob in Paris. Why cheap bread you ask? Well, there are a couple of reasons.

The first is for authenticity. Despite its elegant name, the Monte Cristo Sandwich wasn’t invented on some fancy yacht in the French Riviera, nor was it a creation of Alexandre Dumas’ fictional character, who was out to settle an epic beef. While the Monte Cristo is undeniably inspired by the French Croque Monsieur, it didn’t start appearing in its current form until the 1950’s in the US. About a decade later the Monte Cristo Sandwich showed up on the menu at the Blue Bayou restaurant in Disneyland, which cemented its place in the American culinary repertoire as it spread its way across the country through diners and dives.

This leads me back to the bread. These roadside diners that gave rise to the Monte Cristo Sandwich weren’t using authentic Parisian baguettes, they were using pillowy soft rolls and sandwich bread to make this sandwich. In order to stay true to it’s inauthentic roots, a Monte Cristo requires mediocre bread. The second, more practical reason for the cheap bread is because the light airy structure of cheap bread gets crisp, instead of hard and crunchy, which is exactly how we want this sandwich.

As for the amount and type of ham, it’s really up to you and your preferences. I used two slices of a ham, and one slice of turkey, but this would be just as good mounded high with pastrami or Jamón serrano. For the jam, I’m a strawberry jam guy when it comes to Monte Cristo Sandwiches, but I could see this working with a Fig Preserve, Onion Jam, or pretty much anything else you may have in your pantry. 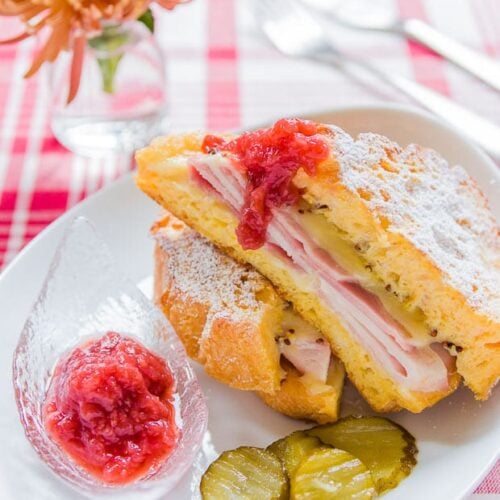