Because the waters around Japan become warm in summer, oysters are typically only eaten in months that include an “r” (Septembe_r_ through ap_r_il). With the end of oyster season rapidly approaching, I found a half pound bag of shucked oysters at my local supermarket on sale for about $7 and couldn’t resist.

With crunchy bamboo shoots, savory abura-age and creamy morsels of oyster hidden amongst mouth-wateringly savory grains of rice, this Japanese classic is a one-bowl meal that tastes even better than it looks. Abura-age (pronounced ah-boo-rah-ah-geh), which literally means “fried in oil” is a tofu product that’s been thinly sliced and deep fried. It has a meat-like texture that absorbs flavors like a sponge, making it a bit like oyster flavored ham, when mixed in with the rice.

Although some people like to cook the oysters together with the rice, I prefer cooking them separately and mixing them together at the end. To get oyster flavor into the rice, I quickly blanch the oysters in boiling water to make a stock. Then I cook them with soy sauce sake and sugar. The rice gets cooked with the stock and extra liquid from the seasoned oysters, ensuring the rice is full-flavored, while preventing the oysters from becoming overcooked. 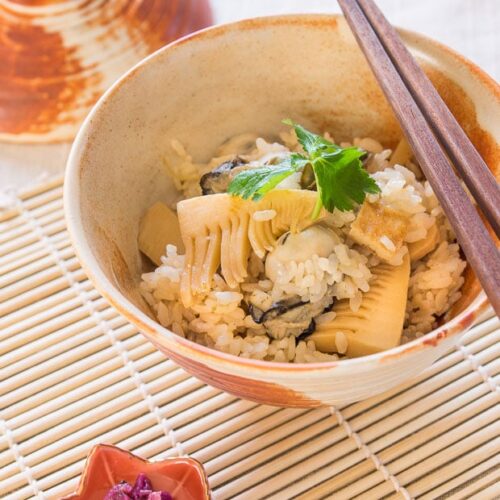