My love affair with Pho (pronounced “fuh” not “foh”) all started in the waning years of college, where cheap, fast, and satisfying meals were what my stomach (and wallet) craved. At first I thought it may just be a fleeting infatuation, but after college, as I moved my way down the East Bay with various tech jobs, I found myself turning to the comforting noodle soup, not just as a stop-gap meal, but as a soul soothing salve that never failed to put a smile on my face. The clear mahogany soup is light, and yet it has a voluptuous full bodied flavor with the earthy aroma of beef, charred onions, ginger, and warm spices. The rice noodles are satiny smooth with a remarkably elastic texture that just begs to be slurped.

In the decade since I made my exit from Silicon Valley, I’ve lived in areas of the world where good Pho is nearly impossible to find. That’s why I’ve spent the time perfecting my own take on this relatively modern Vietnamese classic.

The great thing about Pho is that once you have the base broth, you can season it how you like, and top it with what you like. In the north of Vietnam, where Pho is thought to have originated in the past century, the noodles are broader, and the toppings are limited to meat and a generous sprinkle of scallions. In the south, Saigon-style Pho is sweeter and adorned with everything from bean sprouts, to limes to fresh herbs like basil and cilantro.

Although I appreciate the restrained approach of the north, which highlights the quality of the soup, most bowls of Pho in California involve a wide variety of toppings and condiments that let you change the taste of the soup as you progress through the bowl. The toppings I have listed in my recipe are merely suggestions, so feel free to change them up how you like.

To make the soup, most traditional Pho recipes call for leg and knuckle bones, but the bones and marrow don’t have as much flavor as meat, which is why many recipes have you cook both meat and bones together. I’ve found that oxtail has a nice balance of meat, fat, marrow, bone and connective tissue, which produces a marvelously beefy broth using fewer bones.

For the aromatics, it’s important to slowly char them. The charring does not make the soup bitter, and it gives the broth a delightfully smoky complex flavor and mellow sweetness. While it may be tempting to speed things up by using a torch or sticking the aromatics directly on a burner, these methods tend to get you a really thin layer of char with the rest of the aromatic raw. By using a broiler, you still have enough heat to create a nice even layer of char, but you also get some caramelization under the char, which lends another layer of flavor to the soup.

Unless you live in a spice-producing region of the world, most spices take an epic journey between where they are harvested and your local store, which is why it’s a good idea to toast them before adding them to the broth. If you can’t find cilantro with the roots still attached, you can use about a dozen stems instead. If you don’t have a pressure cooker, you can do this in a standard pot as well, but you will need to triple the cooking times (1.5 hours, followed by another 2.5 hours after removing the brisket). You will also have more evaporation loss and will likely have to add some extra water at the end when you measure out the stock.

As for seasoning, most Pho recipes call for yellow rock sugar, and indeed it does add a wonderful caramel flavor to the broth, but if you’re not near an Asian market it can be hard to find. That’s why I usually use evaporated cane juice (a.k.a. raw sugar). You get the same depth of flavor, and it’s available almost anywhere. It also doesn’t need to be cooked for long to dissolve, which makes adjusting the amount you add at the end much simpler.

If you plan on topping your Pho with raw beef, be sure to cut it paper thin so that it cooks properly when you pour your hot broth over it. I like using sliced fillet or sirloin because they tend to be the most tender, but other cuts should work as well if they’re sliced thinly enough. One trick to getting super thin meat, is to get meat that’s already cut for shabu shabu at a Japanese grocery store. If that’s not an option, and you don’t have a meat slicer at home, you can partially freeze the meat, so that it’s firm enough to hold its shape. Then you can use a long sharp knife to slice it thinly against the grain. 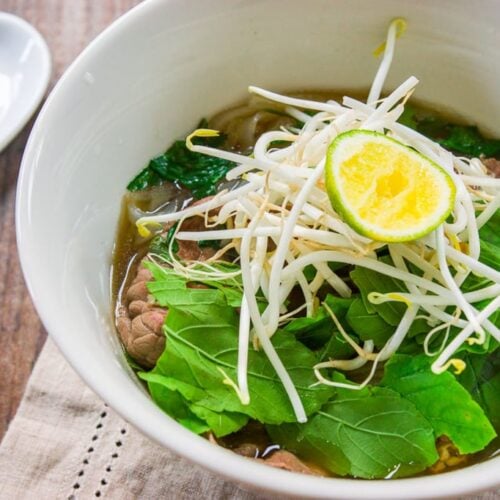 What do you think?23 Cancel reply