The weather in New York is finally starting to warm up and what better way to celebrate the warmer weather than to make Samgyetang. In Korea, it’s believed that the nutrients from the whole chicken, ginseng, garlic, chestnuts and jujubes will protect you from illness and give you strength during the hot summer months. It might be counterintuitive to some, but as someone who loves sweating over a steamy bowl of ramen in the middle of summer, I get the appeal.

In Korea it’s made with young chickens, but I’ve found that cornish game hens work perfectly and makes a serving big enough for one very hungry person. Aside from the chicken, rice and ginseng, I’ve seen many variations of Samgyetang, including one very memorable one I had in the mountains of Gangwon-do that included pine mushrooms. In my version, I’ve opted for a fairly standard spread, including pine nuts, chestnuts, garlic, ginseng and jujubes all held together by sticky rice. By cooking the stuffing in the bird, it takes on all the flavors of the soup, but the ingredients also imparts their pungent, herbal, sweet, and nutty flavors back into the chicken.

You’re probably already familar with most of the ingredients in Samgyetang, but ginseng and jujubes may be new to you if you don’t cook Asian food much. Ginseng is a gnarly root that’s widely used in traditional Chinese medicine. In the US it can be found in herbal teas and has a potent bittersweet flavor. If you can find it fresh, that’s the way to go, but you should also be able to find them dried at Chinese herbal stores. Jujubes are sometimes called red dates because they look a bit like dates and have a caramel-like flavor very similar to dates. They’re nothing special on their own, but after cooking inside the chicken, the flesh becomes soft and provides a wonderful sweet surprise that counterbalances the savory chicken.

Most recipes call for using water when making Samgyetang, but I like using stock because it makes the soup more intense and gives the broth a rich creamy taste. I usually use the leftover bones from a roast chicken, or I go and buy chicken bones to make the stock, and I also like adding a 2″ x 5″ piece of dashi konbu (kelp) to the stock to give it a little extra umph.

Samgyetang is normally under-salted and served with a side of scallions and sea salt so the diner can season the soup to suit their tastes. As you pick the chicken off the bones, you can also dip the chicken directly in the salt. Since there’s rice already in the chicken, get out a bowl of kimchi and you’re set. 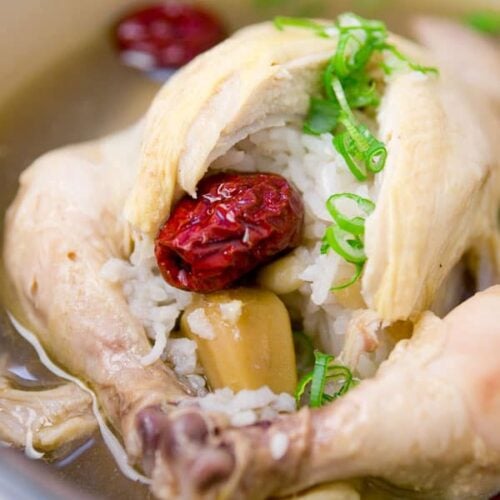