This post may have been a year in the making, but I’ve been working on this tonkotsu ramen for the better part of the last decade. In case you haven’t been indoctrinated into the wonderful world of ramen, Tonkotsu broth is the Holly Grail of noodle soup broths. It’s thick, creamy and nearly white in color, from pork marrow bones that have been simmered to smithereens.

Given the availability of reasonably good frozen ramens, and the plethora of shops specializing in the one bowl meal, most sane people in Japan don’t undertake the challenge of making ramen at home from scratch. I don’t know if I’m just crazy or if it’s my fearless American spirit, but at some point in college, it occurred to me that I could make the one bowl wonder that got me through many an all-nighter… from scratch.

My first attempts were pale watery excuses for ramen. Actually, they were more like noodles in pork soup. Over the years, my attempts yielded broths that were too porky, too brown, or too canned-meat tasting. Eventually, I got the soup to a place where you could pass it off as ramen to the less experienced palate (which was when I started writing this post), but it never quite nailed the nuanced balance of meat, aromatics, and body.

So how did I figure it out? During my recent trip to Japan, I had many bowls of ramen, each with its own distinct character and personality. Some used chicken stock, others included pork. I even had one ramen that was made of tuna stock. I think I was in the middle of a bowl of chicken consommé ramen with bacon, mozzarella and fried burdock on top when it occurred to me that perhaps limiting myself to a 100% pork broth wasn’t the right approach for the type of stock I was trying to create.

I had another epiphany at Ramen Stadium, in Fukuoka, where I hopped from restaurant to restaurant, gorging on Tonkotsu Ramen. Many of the broths had a dark oil that I’d always assumed was sesame oil. Upon closer inspection, some of the soups revealed caramelized bits of onion that were nearly burnt. The research of Louis Camille Maillard came to mind and I realized that a lot of the nuances in the broth were not coming from the meat, but from the caramelized aromatics in the broth.

Back at home, with bags of chicken and pork bones in hand, I set to work recreating the flavors and memories while they were still fresh in my mind. And the results? Well, let’s just say I won’t be standing in line for hours outside Ippudo this winter. To say it’s better than Ippudo’s would be a stretch, but does it make your lips sticky with collagen? Yes! Does it have little creamy nibbles of pork fat floating in the broth? Certainly! Does it put a big grin on your face when the steaming bowl is set in front of you? Hell yea!

The toppings are up to you, but I usually go with the standards like chashu, menma , woodear and scallions. If you want some chashu similar to Santouka Ramen’s Toroniku, here’s a recipe for my version. To give a Kagoshima flair, I finish each bowl, with a drizzle of mayu (black garlic oil). It’s technically burnt garlic and it’s not something you’d want to eat alone, but mixed into tonkotsu ramen, it’s divine!

This recipe makes enough Tonkotsu base for 6-8 bowls of ramen (depending on how much water you add), and the Tonkotsu Ramen recipe below makes 2 bowls.

Next, I need to find some kansui so I can tackle the noodle making as I’m not super happy with the noodles I get in Chinatown. 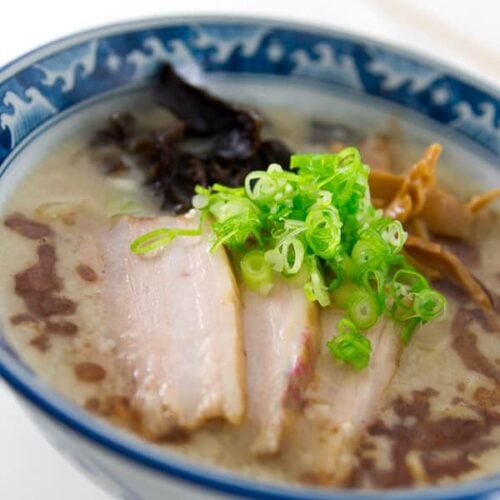 Update: There have been a couple people who have had problems with the original recipe and in speaking with them, I think there are a few points I should clarify: Chashu homemade ramen noodles
Course Entree, Soups & Stews
Cuisine Best, Japanese
Diet Dairy-Free, Low Sugar

What do you think?518 Cancel reply