In most parts of the world, chicken consists of either dark meat or light, but in Japan each bird is dissected into dozens of unique cuts, each with a unique texture, appearance and flavor. Yakitori, or “grilled chicken” restaurants are where this is most evident, with an often pages long menu of chicken parts running the gamut from the mundane, like sasami (chicken tenders) and tebasaki (chicken wings); to the novel, like bonchiri (tail) to seseri (neck meat); to the down-right bizarre, like kinkan (unlaid eggs) and sunagimo (gizzard)

And while yakitori shops these days can be sleek spendy affairs complete with their prix fixe menus, wine lists, and diners clad all in black, it wasn’t long ago that yakitori was a street food enjoyed by sweaty businessmen in ill fitting suits in cramped smoky stalls under elevated train tracks. Reaching further back, there are written records of grilled poultry dating back over 900 years.

Given its age and Japan’s aversion to waste, it’s unsurprising that every part of the chicken is used. After meticulously carving away every edible piece of the bird, the bones are usually scrapped down for any lingering bits of meat before they’re used to make stock.

It’s these scrapings, combined with end cuts, trimmings and a few seasonings that traditionally get turned into Tsukune; in essence a Japanese chicken sausage. But there’s another more unusual ingredient in tsukune. Nankotsu, or cartilage, is often minced into the mix. Not by mistake or some misguided effort to over optimize the chicken, but because it adds an addictive texture to an otherwise texturally humdrum casingless sausage.

I haven’t always felt like this though. As a kid, I used to painstakingly pick my way through chicken to avoid the cartilage and tendons and so when I first bit into a juicy piece of tsukune at a chic yakitori shop in Kyoto, I was shocked and a little grossed out by the telltale crunch of a piece of cartilage in my otherwise-delicious tsukune.

“What kind of inattentive $#*!hole had my friend taken me to”, I thought to myself. Although I was thoroughly turned off by the texture, it tasted pretty good and I didn’t want to offend my host, so I powered my way through the rest of the skewer and vowed never to return.

Fast forward a decade, and after living in Japan for nearly half that time, I’ve come to not only embrace the idea of eating cartilage, but to enjoy it. You see, the problem was with me, and not the shop. I’d grown up with certain preconceived notions about what was edible and what wasn’t, and cartilage, along with things like watermelon seeds or apple peels were things humans just weren’t meant to eat. To this day, I still prefer my apples and grapes peeled, but I’ve come to enjoy roasted watermelon seeds and I’m trying to cut back on my obsessive fruit peeling.

If I haven’t lost you with the cartilage, I’m pretty sure I’m going to lose you with the dipping sauce. Tsukune, which is often glazed with taré(similar to teriyaki sauce), is usually served with a raw egg yolk. Aside from the sphere of yolk looking stunning on the plate, it makes for a rich contrast to the savory sweet chicken sausage on a stick. If you’re on board with the idea, but worried about the food safety issues, there are two ways around this. The first is to use pasteurized eggs, the second is to serve this with sous vide eggs

While tsukune is delicious slathered in taré and the yolk, it’s also great just sprinkled with some sea salt, served with yuzu kosho, so don’t give up on this because you can’t do the raw egg.

At restaurants, Tsukune, like all yakitori is grilled over a special charcoal grill with two rails that each skewer rests upon , allowing the chicken to be suspended and rotated directly over the coals. Since most of us don’t have a yakitori grill at home, and putting this loose patty on a conventional grill is a recipe for disaster, I’ve developed a method that works pretty well at home. By starting the Tsukune in a frying pan, they can be easily skewered and finished off on a regular grill or under a broiler without having them stick.

Lastly, while it may be tempting to buy ground chicken or to toss all the ingredients into a food processor, I recommend hand chopping skin-on chicken thighs. By hand chopping the chicken, you can preserve some of its texture, so it doesn’t turn into a homogenous mush, even if you decide to forgo the cartilage. The skin is important because like any sausage, you need a certain amount of fat in the mixture, otherwise it will dry out by the time it is cooked through. 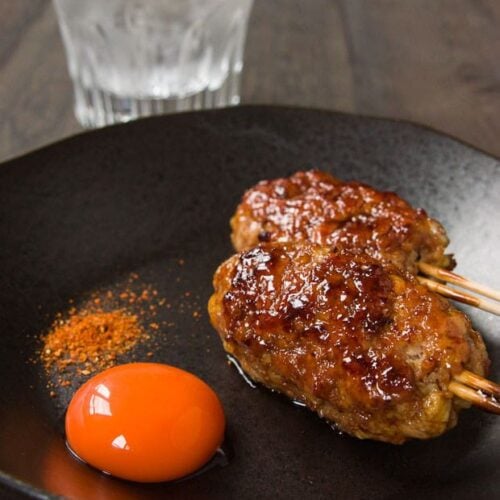