Arroz con Pollo, which literally means “rice with chicken” is a luscious one-pot meal that is as simple as it sounds, and yet when prepared well, it is greater than the sum of its parts. A feast for the senses, it’s not only visually stimulating with brilliant hues of ochre and vermillion, Arroz con Pollo also has layers of tastes and flavors that synergize to make each bite more delicious than the one before it.

Arroz con Pollo is one of those dishes that has about as many ways to make it as there are cooks that prepare it and it’s a dish that’s eaten in some form or another in just about every Spanish-speaking country in the world. For my version I like to marinate the chicken with plenty of garlic, chili powder and a bit of vinegar. When browned, the marinated chicken creates a marvelous smoky layer of fond on the bottom of the pot that imbues the rice with a preposterous amount of flavor.

I use the oil that’s left in the pan after browning the chicken to extract color and flavor from Achiote seeds (a.k.a. annatto). The seeds looks like little reddish-orange pebbles and have a sweet peppery taste that’s a bit like sarsaparilla (i.e. the flavoring in root beer). Aside from the earthy flavor it imparts, it gives the rice a stunning golden hue. While it should be available in any Latin American grocery store, if you can’t find it, you could substitute turmeric or saffron for the color, if not the flavor.

A sofrito of onions, bell peppers, garlic and cilantro stems get caramelized in this achiote infused oil before the rice goes in. Then the chicken is layered on top of the rice along with some red bell peppers and tomatoes. Finally some good chicken stock is added before the pot is covered with a lid and whole thing is simmered until all the components have had a chance to mingle and coalesce into a mouth-watering pot of Arroz con Pollo. 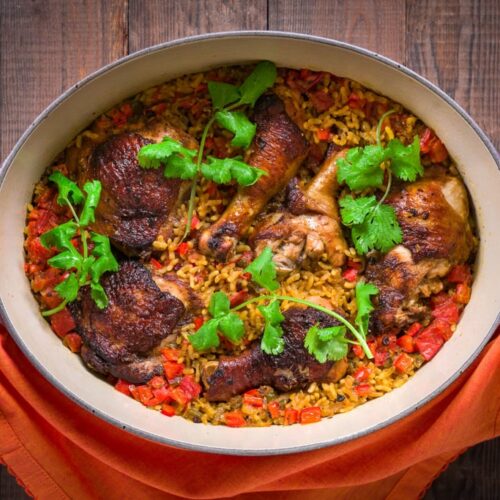