Omurice is a popular modern Japanese dish that’s a mashup of Western omelets and Japanese fried rice. It’s a favorite amongst kids and therefore a staple of home cooking here, but it can also be served a little fancier at Yoshoku restaurants in Japan.

Although everyone makes it a little differently, the omelette is usually stuffed with chicken rice, which is fried rice that’s made with chicken and seasoned with ketchup. This gives it a vibrant red color and savory sweet taste, that’s the trademark flavor of this dish.

As for the egg, classic styles of omurice were made into an oval shape and wrapped in a thin layer of egg, but these days, many people ditch the thin papery egg for a luscious blanket of soft scrambled eggs on top.

Omurice is comprised of two main components, and can also be sauced. Here’s what’s inside each of them.

Although it’s called “chicken rice,” the predominant flavor here is ketchup, which makes it the perfect sweet and tangy contrast to the creamy egg on top. For my omurice, I like using a homemade ketchup because the spices make for a more interesting flavor profile, and it’s a little less sweet than the store-bought stuff. That being said, if you’re looking for that classic taste, the bottled stuff is the way to go. On the flipside if ketchup isn’t your cup of tea, don’t worry, you can make omurice using any kind of fried rice.

Although I almost always advocate using chicken thighs over breast meat, this is one of the rare exceptions where I feel like breast meat works better. Just be careful not overcook it, or it will get tough.

Other than that, I like to brown some onions to get a little more flavor into the rice. I also add some oyster sauce as a more flavorful alternative to soy sauce; this helps balance out the sweetness of the ketchup with plenty of umami. Some people also like to add other vegetables to their chicken rice like carrots and peas, which is fine, but I think they’re unnecessary unless you’re trying to get your kids to eat more vegetables. I usually serve this with a side salad.

The omelette is more about the cooking technique than the ingredients, but I do like to use eggs with very vivid yolks so that the omelette turns out nice and golden. I also add a bit of cream, which ups the richness to balance out the acidity of the rice. If you’re really looking for something over the top, try adding some grated cheese to the eggs.

Although omurice is usually just sauced with ketchup, it’s sometimes also served with a more flavorful sauce such as the sauce from Hayashi Rice (Omuhayashi – オムハヤシ) or Japanese Curry (Omukarei – オムカレー), or Meat Sauce (Omumeato – オムミート). For the last one, you could even do away with the rice and add spaghetti, which turns it into Omusupa (オムスパ). As you can see, there’s a lot of opportunities to get creative here.

How to Make Omurice

Making chicken rice is pretty straight forward. I start by marinating the chicken in a bit of soy sauce to ensure it’s well seasoned. Then I brown some onions before throwing the chicken in and stir-frying it. The trick to not having chewy chicken in your omurice is to add the rice before the chicken is fully cooked through. I usually go in with the rice as soon as I can’t see any raw sides on the chicken. This gives you plenty of time to get the rice nice and caramelized without turning the chicken into boot leather. Once the rice is heated through I, add the ketchup and oyster sauce and stir-fry until the sauces start caramelizing around the rice. Then you can load the rice into a mold and invert it onto a plate. I usually leave the mold on the plate until my eggs are done, to help keep the rice warm.

The trickier part is the omelette, but using this technique, anyone should be able to get an awesome creamy blanket of egg with big fluffy curds that are just barely held together. The first thing is to use a non-stick pan; this is a must to get the egg out of the pan cleanly.

Once you’ve melted the butter in the pan, add the egg and give them a few seconds to set up at the bottom. Then you just gently scramble them while shaking the pan, which redistributes the uncooked egg as you break up the curds. I usually take the omelette off the heat once there are no big pools of egg left, as carryover cooking will thicken the remaining egg into a rich, creamy sauce. But before you take the pan off the stove, blast it with heat for a few seconds which will vaporize any liquid between the egg and the pan, making the egg slide easily out of the pan.

Although the soft scrambled eggs aren’t quite as smooth of a canvas to paint on, you can still do fun shapes such as stripes, hearts, stars, or faces using ketchup in a squeeze bottle.

Omurice (オムライス), or Omuraisu as it’s pronounced in Japan, is a portmanteau of “Omelette” and “Rice.” It’s unclear where the dish originated, but Omurice is considered yōshoku(western food) in Japan. It was probably created around the turn of the last century when western-style cafes became popular.

Yōshoku (洋食) means “Western-style food” in Japanese, and it refers to a sub-genre of Japanese cuisine modeled on food from the West. Although these dishes are considered Western in Japan, many do not exist outside of Japan. Some examples include curry rice, hamburg steak, and Hayashi rice. In a way, Yōshoku is like the Japanese analog to American-style sushi such as spicy tuna rolls and California rolls.

How do you pronounce Omurice?

Omurice is a 5-syllable word that’s pronounced as follows:

o like order
mu like move
ra the “ra” sound does not exist in the English language and the best way to make it is to say the word “romp” with the tip of your tongue at the front of your mouth.
i like even
su like soup 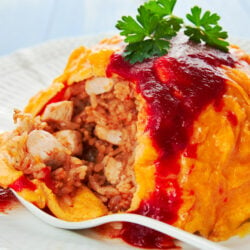 What do you think?79 Cancel reply