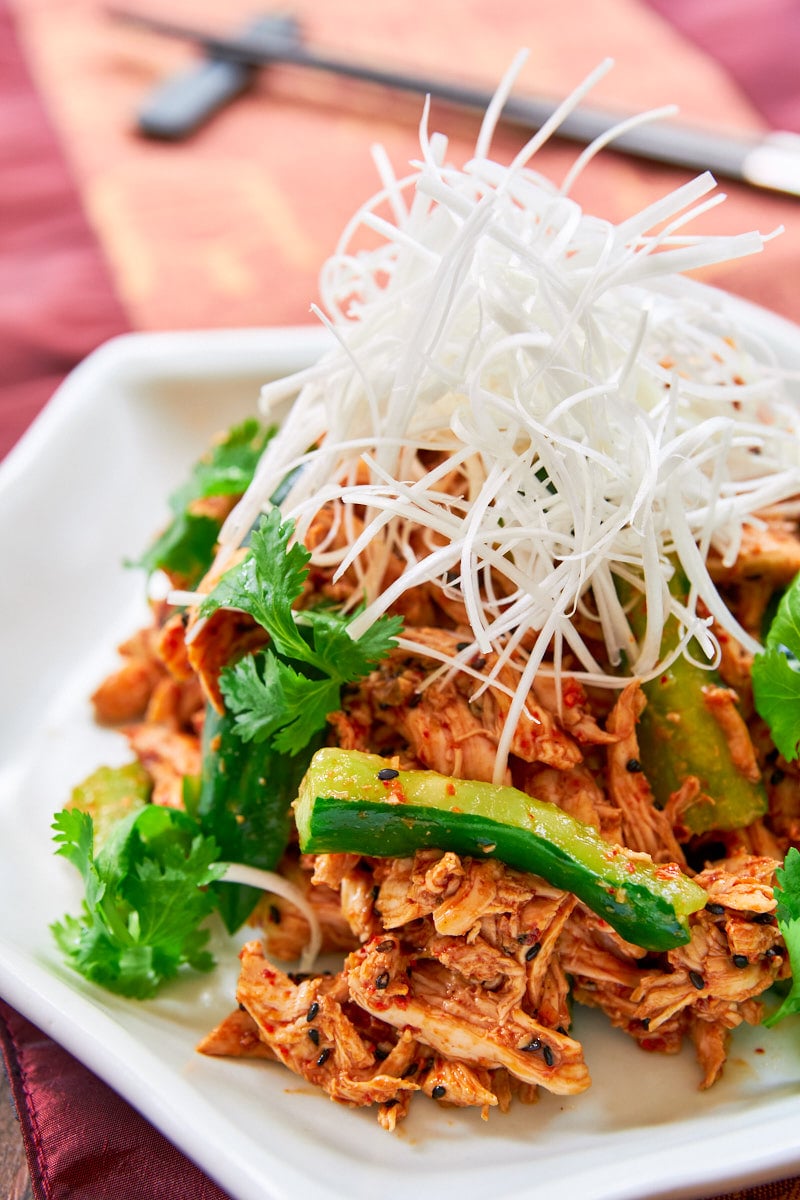 Bàng Bàng Jī (棒棒鸡, literally “Stick Stick Chicken”), is a salad of sorts with either shredded or thinly sliced chicken breast dressed with the tongue tingling and spicy málà balance of Sichuan pepper and chili oil. The name has a couple of origin myths that all have to do with beating chicken meat with a stick. In one incarnation it is said that the name is an onomatopoeia for the sound made when you beat the boiled chicken to shred it into evenly sized pieces. Another story posits the character 棒, which means “stick,” refers to beating the raw chicken with a stick to tenderize it.

Like many dishes in the Chinese culinary repertoire, Bàng Bàng Jī has ricocheted around the world being reinterpreted to suit local tastes.

In Japan, it’s known as banbanji (バンバンジー), and they’ve turned it into a salad, including cucumbers, and sometimes even tomatoes. Because the Japanese can’t take a lot of heat, the amount of chili has been toned down, with the focus shifted towards the sesame flavor, giving the sauce a creamy nuttiness.

As you may have guessed, Bang Bang Chicken is the half-translated English name for the dish. “Bang Bang” still works as an onomatopoeia in English, and it sounds a lot better than calling the dish “Stick beaten chicken.” Unfortunately, in the US, the dish has somehow morphed into a battered and fried chicken dish, that’s glazed with a sweet, spicy and creamy sauce. One US chain restaurant even goes so far as to misrepresent it as a Thai dish. I’m all for the organic evolution of food as it travels around the world, but this is such a departure from the original recipe that it’s lost its soul in translation.

For my version of Bang Bang Chicken, I’ve gone with a sauce that leans heavily on the Chinese original with a spicy base of chili oil. Instead of using bottled chili oil (which can be a bit unpredictable in heat), I’ve opted to make my own oil, simplifying the process, while adding aromatics like ginger and garlic. Some Sichuan pepper gets added at the end to give the oil a wonderful citrusy aroma and some tongue-tingling má.
The oil gets added into a mixture of soy sauce, sesame paste, sesame oil, and black vinegar, which makes an incredibly flavorful sauce for the relatively bland chicken. Rich and nutty from the various forms of sesame, the dressing is balanced by a fruity tang from the black vinegar. The heat from chili oil is countered by the tongue-numbing Sichuan Pepper, while the soy sauce and caramelized aromatics pack a wallop of umami.

If you can’t find black vinegar (a.k.a. Chinkiang vinegar), a 50/50 mixture of regular rice vinegar and balsamic vinegar works pretty well as a substitute. As for the sesame paste, Chinese or Japanese sesame paste works best because they are both ground from whole sesame seeds; however tahini(which is made from just the kernels) will work in a pinch. 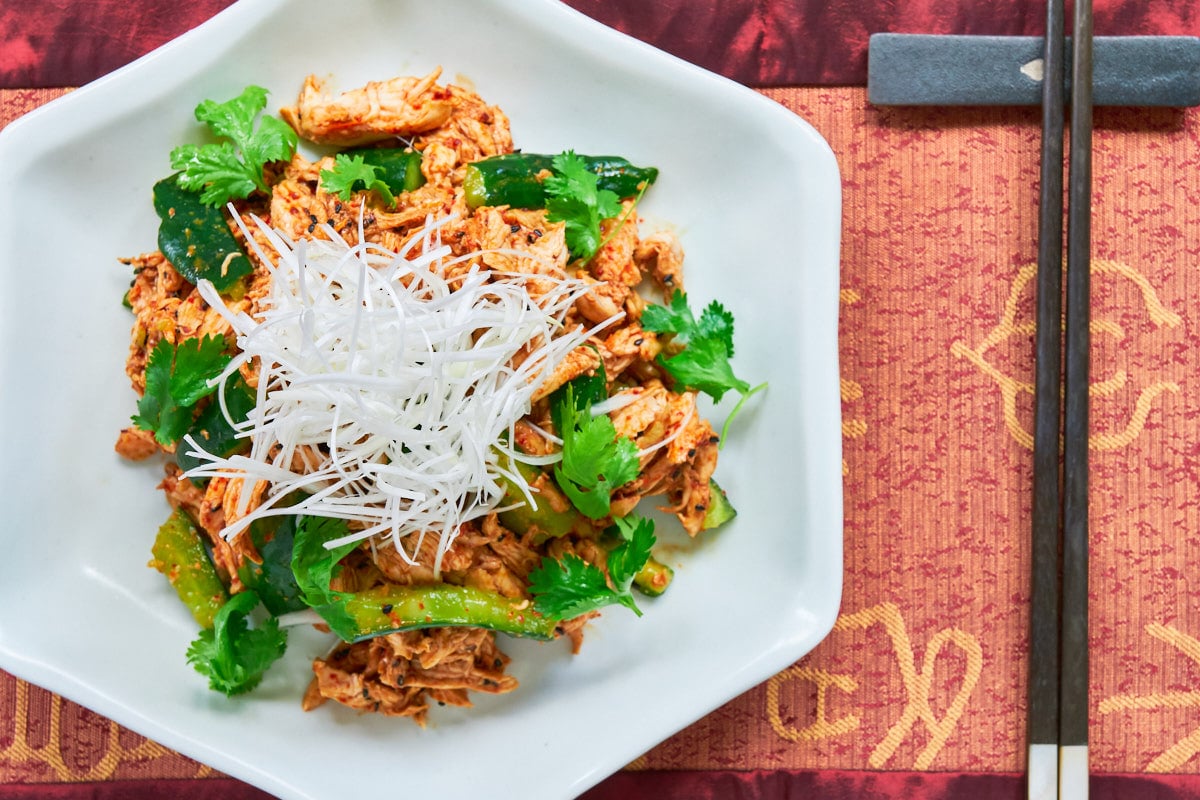 I’m not usually a fan of white meat because it’s relatively bland and difficult to prepare, but for Bang Bang Chicken, it works great.

The chicken is usually boiled in water; however, the high heat makes it very easy to overcook the chicken. That’s why borrowed a technique from my Chinese Chicken Salad and poach it by bringing some well-salted water to a boil, adding the chicken, and then cuting the heat. As the chicken cooks, the temperature of the water will fall. This not only prevents the chicken from losing its juices, but it also slows down the cooking process, making it harder to overcook the delicate meat.

Although white meat is typically pretty bland, it works just fine in this dish. The dressing has tons of flavor, and because the meat is shredded, those flavors permeate every strand of chicken, making this some of the best tasting chicken you’ll ever put in your mouth, regardless of the cut!

I like to use chicken tenders because as its name implies, the meat is very tender. They’re also great because they poach much faster than a whole breast. If you only have breasts, you can cut them into strips, about the thickness of chicken tenders.

Bang the Cucumber Not the Chicken

Although the heirloom chickens used to make the original Bàng Bàng Jī were likely very tough, the broiler chickens of today require no tenderizing. Using a stick to beat the boiled chicken turns it into mush and squeezes out its juices. That’s why I recommend pulling it by hand. If you were really hoping to beat something with a stick, don’t worry! You can still take your aggression out on the cucumbers. 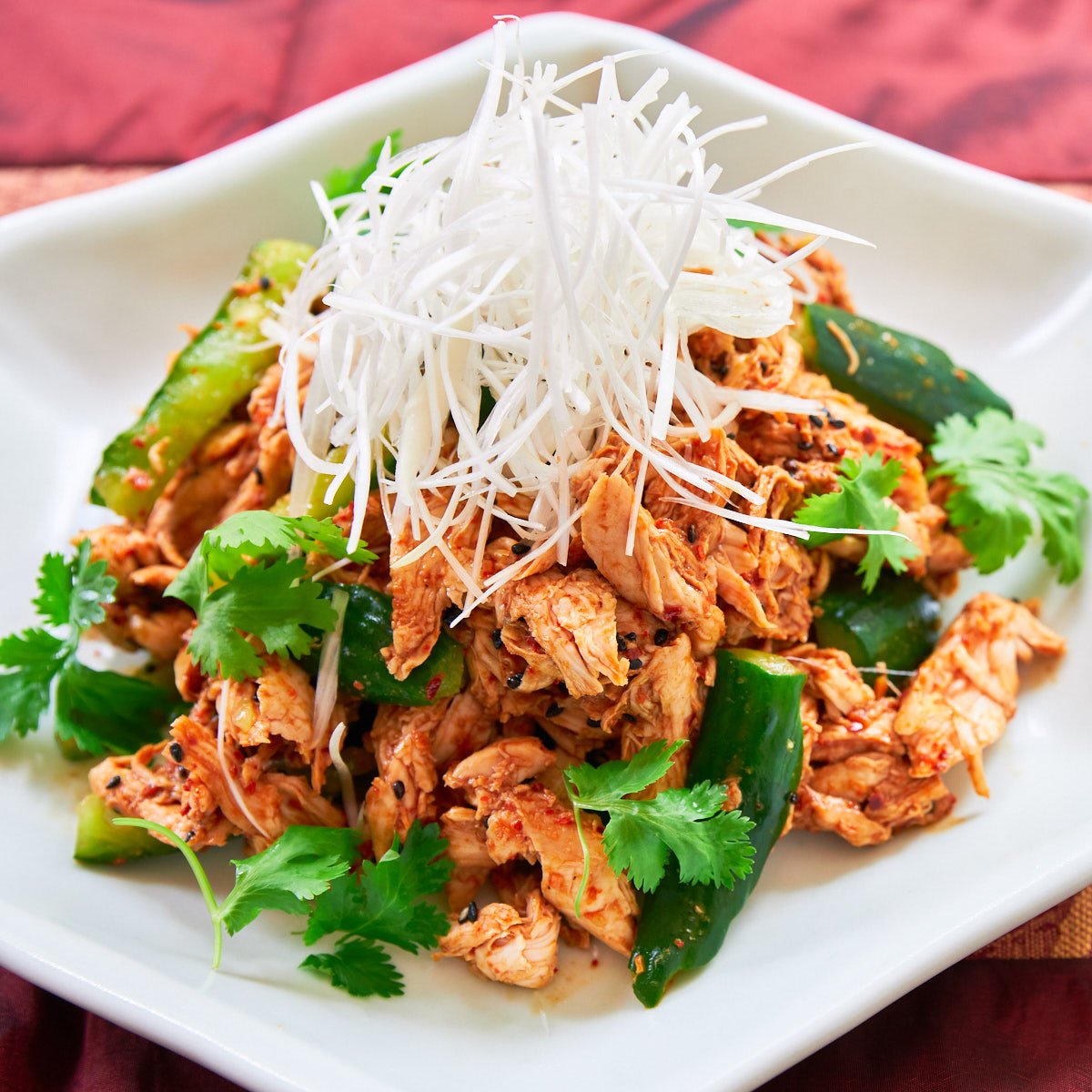 Yes, I know the original Chinese version of this dish doesn’t include cucumbers, but it’s the one part of the Japanese interpretation that I like. Cucumbers add both texture and freshness to the plate, keeping each bite interesting. In Japan, the cucumbers are usually julienned, but I like beating it with a stick, which crushes it into irregular shapes, leaving lots of nooks and crannies for the dressing to seep into.

Once they’re beaten into submission, I salt the cukes to extract excess water through osmosis. This prevents the cucumbers (which are 96% water) from watering down the sauce.

As for the variety of cucumber, I recommend using cucumbers with thin skin and few seeds. I used Japanese cucumbers, but Lebanese and English (a.k.a. hothouse) cucumbers will work as well.

Finally, to assemble the dish, I shred the chilled chicken and squeeze out the excess water from the salted cucumbers. These get tossed in the sauce along with some roasted black sesame seeds. To finish this dish, I like to tame threads of scallion with baking soda. This takes the harsh edge off of them by neutralizing the volatile sulfur compounds. A few cilantro leaves for color and flavor and the Bang Bang Chicken is done!