I’m not a sandwich person, or at least I wasn’t… In high school, while my friends were piling into cars headed to Subway for lunch, I could be found walking alone to a nearby taco truck. For a long time, I just thought I didn’t like sandwiches. But as I grew up and had a chance to meet sandwiches from all walks of life, I gradually built a list of sandwiches I enjoyed: the Connecticut-style(is there any other kind?) lobster roll with a pillowy buttered bun that’s overflowing with warm lobster meat glistening from the butter; the meatball hero with its savory meatballs, molten mozzarella and sweet tangy tomato sauce stuffed into a huge roll; or the intense juxtaposition of sweet and salty epitomized by the Monte Cristo

By the time I had my first banh mi in the Blossom Hill neighborhood of San Jose, I was a regular sandwich pro with a long list of favorites. But nothing prepared me for the goodness that is a banh mi. Perhaps it was the ridiculously low price ($1.50); or the impossible light, yet audibly crisp roll; or the harmonious cacophony of textures, tastes and colors that made each bite unique; or the way the well marinated meat continued to give up flavor the longer you chewed. Whatever the reason, one sandwich was all it took for me to be hooked for life. To do this day, Banh Mi’s are still my favorite sandwich, and they would probably make it into my list of 10 favorite foods of all time.

While I’ll never say “no” to a banh mi of any variety, my favorite will always be the first banh mi I had: Bánh Mì Thịt Xá Xíu, wherein the meat is Chinese-style barbecued pork (a.k.a. char siu), accompanied by a smear of pate, loads of sweet and sour pickles, crisp cucumbers, cilantro and spicy green chilies. It’s the quintessence of my perfect sandwich with a sublime balance of savory, sweet, sour, and umami and just a hint of smoky bitterness from the grilled pork. Texture wise, your mouth will never grow bored, with subtle shades of crisp, crunchy, creamy and chewy coming together in varying proportions in each bite. Similarly the variety of flavors makes for a well-tuned orchestra of combinations from refreshingly spicy and herbal to rich and intensely meaty.

So if Bánh Mì Thịt Xá Xíu is my favorite sandwich ever, “why have I waited so long to post a recipe?” you ask. Well, I suppose it all comes down to laziness, but I blame the xa xiu. Between the marinating and the roasting, the xa xiu takes about two days to make, thus defeating the whole point of making a sandwich. But living in Japan, where I haven’t been able to find a good Vietnamese restaurant, much less a place that serves a decent banh mi, I decided something needed to be done to take the edge off of my cravings.

Luckily, there’s an easy fix for making xa xiu faster: just chop the meat up. This not only makes it easier to eat, but it also makes it marinate and cook faster. Best of all, you can “grill” it in a frying pan, which means it only takes about five minutes to have this gloriously caramelized pork that’s redolent of garlic and five spice ready to stuff your banh mi. One of my favorite parts of xa xiu is the ultra-flavorful chewy bits that border on crisp around the edges, and using this method, 100% of your meat will end up like this. The trick is to use pork belly and to slowly caramelize it, allowing most of the fat to render out so that the meat fries in its own fat, just like frying bacon.

As for the bread, I prefer using cheap “french bread” from the supermarket instead of a proper French baguette for banh mi. That’s because cheaper bread tends to be less dense, with a pillowy center and a crust that is more crispy than crunchy. Just be sure to toast the whole thing before filling it so the crust is extra crisp. As for mayonnaise, I’m not a big on mayo in any sandwich, and for me, a banh mi gets plenty of creaminess from the pate, which is why I nix the mayo. If mayo’s your thing, feel free to slather away. Likewise, the filling materials are merely a guideline to get you going down the path to find your perfect banh mi, so feel free to substitute and improvise. 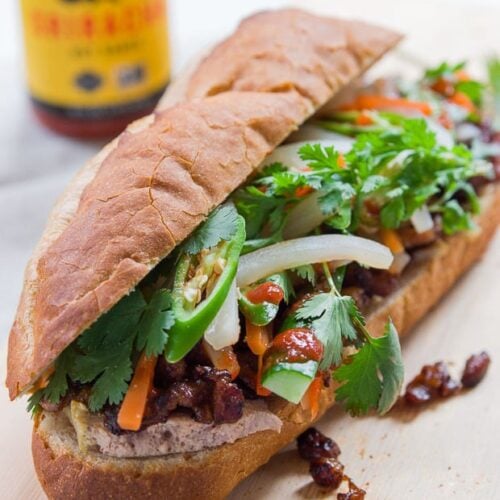 Notes If you want to overstuff your banh mi, you can scrape out some of the inside of the bread to make room for the filling.
Course Entree, Sandwich
Cuisine Best, Vietnamese
Diet Dairy-Free