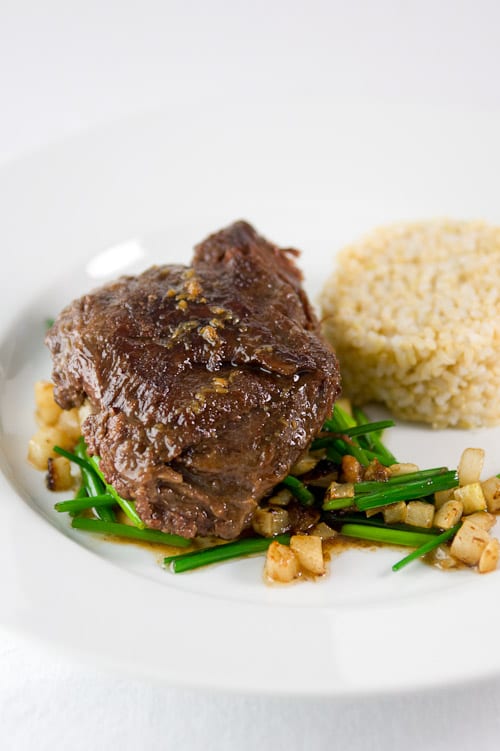 I was recently asked what my favourite thing about New York is. Anyone who’s lived here, knows that there’s a lot to like, but one of the things that makes it unique for me is that you can walk down almost any block and witness something you would never see any other place on Earth. Last month, I was heading out to get my hair cut in NoHo, when the gleaming white interior of this Japanese butcher shop caught my eye. If it weren’t odd enough that this place that deals in animal carcasses looked like it had jumped off the pages of Dwell Magazine, this butcher only sells Wagyu Beef that’s raised on a certain ranch in Oregon… Only in New York.

For those of you that aren’t familiar with Wagyu beef, the term refers to several breeds of cattle that tend to have an obscene amount of fat marbled into the meat. The marbling is further coaxed along with special feed and other things like beer and regular massages. Yes, you read that right, they actually booze up the bovines and hire big burly masseuses to give the cows a daily rub-down.

The terms Kobe, Mishima, and Omi are areas in Japan where Wagyu is raised. But since Japan doesn’t have a ton of land, much of the feed that’s used to raise the cattle is imported from the US. Since it takes much more feed to raise a cow than the cow itself weighs, this is a horribly inefficient way of doing things.

Some genius figured out that land here is much cheaper, and that it would cost a lot less to just raise the cattle here, butcher them, and send the meat back to Japan. Enter, Japan Premium Beef, the first US retail outlet for the ranch that’s been supplying some of the best restaurants here in the US with their Wagyu.

Unable to resist the temptations of the many cuts of beef splayed out in the stainless steel case, but not wanting to spend my entire paycheck, I ended up settling for a variety of “lesser” cuts of beef including these beef cheeks. The moment I laid eyes on this pair of medallions, I knew exactly what I wanted to do with them and I asked Yamamoto-san, the butcher, if he could sell me a few pounds of beef fat. He gave me a shy smile, apologized, and politely informed me that they didn’t sell the fat. Maybe he saw the disappointment on my face, but he turned around, picked up a knife, and lopped off a huge chunk of fat, which he wrapped up and added to my bag for free!

Luckily you don’t have to live in New York to pick up beef cheek and a couple pounds of fat. While I doubt you’ll be seeing either at Costco anytime soon, get friendly with your local butcher, and you should be able to get them to save you a few cheeks and some scraps of fat.

The technique for this is similar to duck confit. First the meat is cured in a salt and spices for a couple of days to draw out excess moisture and season the meat. Then, the meat is added to a pot of its own fat and cooked slow and low until all that’s holding the meat together is a melty matrix of collagen. The obscenely rich and tender meat is then seared on both sides in a hot cast iron pan, which gives it a nice caramelized crust.

As much as I loved the beef cheek confit, I have to say the real star of this dish was the caramelized turnip and garlic scape throne the beef sat upon. The veggies were fried in the same pan I seared the beef in, then I added a bit of the concentrated beef juice that’s a byproduct of the confit process. Some sugar and soy sauce then go in, turning the liquid into a shiny brown glaze that can be best described as beef candy.

Because the beef cheeks are so rich, you could really get away with serving half a cheek per person. I ended up having leftover confit, which I threw back into the fat, and tucked away in the fridge for something special. When sealed under a layer of its own fat, it will literally last for weeks (even longer if you freeze it). Of course it didn’t take long before inspiration struck in the form of this bibimbap.

If Korean food isn’t how you roll, you could also turn the leftover beef cheek confit into a decadent sandwich with some caramelized onions, a delicious pasta with gorgonzola, or just about anything else that works well with tender meat. 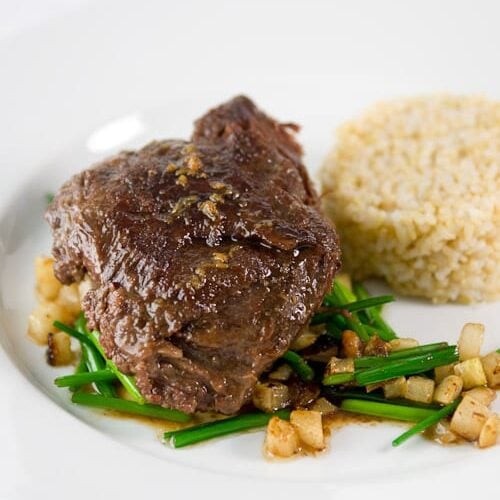