Growing up, my mom was undeniably the queen of the kitchen. Although my step-dad owned Thanksgiving, I can count the number of times he cooked dinner each year, on one hand. On the rare occasions he did cook, Beef Stroganoff was a perennial favorite, and something I crave to this day. It wasn’t fancy but something about the way the intensely savory flavors of the mushrooms, onions and beef melded with the rich and slightly tangy sour cream made it irresistibly appealing.

Sometime during college I was horrified to learn that “real” Stroganoff includes tomato. I summarily pushed the Americanized childhood favorite to the back of my mind and spent the next 20 years of my life cooking stroganoff with tomatoes. The thing is, every time I’d make it, something just didn’t taste right. Don’t get me wrong, my Chicken Stroganoff made with tomatoes is very good, but no matter how many times I make it, it’s not quite what my tastebuds expect when I’m in the mood for Stroganoff.

I’ve since learned that Stroganoff is a dish that’s made its way around the world, from Sweden to Brazil, to Japan and everywhere in between. Recently I decided to follow some of my own advice to: “stop making it how you’re supposed to, and start making it how you want to.”

Thus, my unapologetically American version of Beef Stroganoff. It’s not going to win any awards on authenticity or looks, but if you set aside any preconceptions and judge it purely on taste, it can’t be beat. In terms of ingredients, this is a super simple dish, so how it turns out, depends largely on your technique. Here are a few tips to get you headed in the right direction.

The first thing is to take full advantage of the Maillard effect and throughly brown the surface of the beef and mushrooms in a hot pan. While Stroganoff is often made with tenderloin, I prefer making it with hanger steak, which might not be quite as tender, but is much more beefy in flavor. Look for a piece with reasonable marbling, and as little gristle as possible. Hanger steak is a cut that works better cooked from medium-well to well-done, so you have time to let the flavors of the beef meld with the sauce, but be careful not to cook it too long, or it can dry and stringy.

Finally I like to avoid the time and hassle of making a roux by stirring the flour directly into the sour cream and adding it in at the end. This is a techinque I picked up while perfecting my Chicken Paprikash, and it’s brilliant in that it’s not just a shortcut, but one that produces a more consistent end result. Anytime you’re adding sour cream to a sauce, you need to temper it, as it will curdle if it’s added directly to a hot liquid. This is easily done by stirring in small amounts of liquid from the pan into the sour cream until it is warm. Then you just pour it all into the pan until the Stroganoff has thickened. 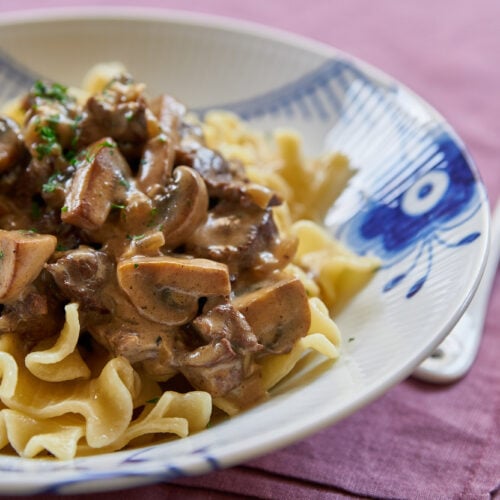