With loads of Vitamin C, blistered Shishito Peppers make a delicious appetizer or side dish that can easily be prepared on the stovetop in a matter of minutes. For the most part, these Japanese peppers are mild, with a floral fragrance, but there’s always one or two in a batch that packs in a surprising amount of heat.

How to Cook Shishito Peppers

Shishitos are a versatile pepper that can be used in a large variety of preparations, including stir-fries, stews, and tempura, however, the most popular way to eat them is to grill them. I’ve developed an easier method that you can do on the stovetop and still get a nice char.

First, you want to wash them thoroughly, as the folds in the peppers can hang onto dirt.

Then you’ll want to poke a hole in them to vent steam, so they don’t pop while they cook. You can do this with the tip of a knife or by using a toothpick or skewer.

Next, the peppers go into a dry cast iron or carbon steel pan heated over medium-high heat until it is very hot. I don’t recommend doing this in a stainless steel or non-stick pan as the former will discolor at high temperatures, and the later will release toxic chemicals.

Let the peppers roast undisturbed in a single layer until the skin starts to char and blister on one side, then flip them over and let the char on the second side.

Finally, you want to roll them around and char any sides that got missed.

When they’re cooked, transfer the peppers to a bowl and toss with your favorite oil and seasonings.

What are Shishito Peppers?

Shishito (獅子唐辛子) peppers are a Japanese cultivar of chili pepper that are small and relatively mild. Shishi (獅子) means “lion” in Japanese, and the peppers get their name from their wrinkled appearance, which looks similar to stone lion statues found in shrines around Japan. The second half of the word “to” is an abbreviation for togarashi (唐辛子), which means “chili pepper” in Japanese.

Most Shishito peppers are mild and have little to no heat. However, one in seven peppers or so can be very spicy. This makes the shishitos fun to eat because you never know when you’re going to get a hot one.

How do you pronounce “Shishito”?

Shi-shi-to has three syllables, and each one is pronounced as follows:

What is the difference between Shishito and Padron Peppers?

Both Shishito and Padron peppers are cultivars of the Capsicum annum species, and they are very similar in appearance and taste. Shishito peppers tend to be slightly smaller and more wrinkled than Padrons, and they have a more floral aroma. Padrons tend to be a little plumper with thicker flesh and thinner skin. They both work equally well for this recipe.

A few weeks ago I connected with an amazing watercolor artist who specializes in food illustrations. Inspired by her work, I asked Kailene to collaborate on this recipe with a painting of the blistered Shishito peppers. She also sent over an awesome time-lapse of the process, which I’ve included in the video below. She posts two mouthwatering paintings to Instagram each week (@kailenefalls), and if you need an illustrator go check out her website. 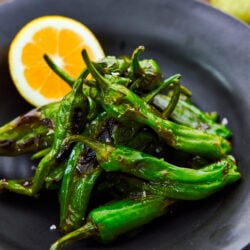