Gyoza are small Japanese potstickers that are most commonly made by filling a thin round wrapper with a mixture of pork and cabbage. The flavorful seasonings and umami-rich cabbage doesn’t need meat to taste good, though. In this recipe, I want to show you how you can make Vegetable Gyoza flavorful enough that vegans, vegetarians, and meat-eaters can all enjoy.

How to Make Vegetable Gyoza

Gyoza wrappers are typically plant-based, so we’re going to focus on a vegetable and mushroom filling that will work for vegan, vegetarians, and meat-eaters alike!

The first thing you want to do is sautee the fresh shiitake in vegetable oil. This helps bring out more complexity in the mushrooms’ flavor while pre-shrinking them, so your filling doesn’t shrink after you stuff your gyoza.

After the mushrooms have started to brown, add the chopped cabbage, washed quinoa, water, sake, and salt and cover the pan with a lid. Turn down the heat to low and let this cook for 15 minutes, or until there is no excess water remaining at the bottom of the pan.

While you wait for the quinoa to cook, prepare the remaining ingredients. To make the umami powder, trim the ends off of the dried shiitake stems and crumble the mushrooms into a spice grinder along with the konbu. Spin the mushrooms and kombu until you have a fine powder. If you don’t have a spice grinder, you can use a grater or Microplane as well.

If, after 15 minutes, you still have water at the bottom of the pan of quinoa, remove the lid and turn up the heat to let it evaporate. You want the mixture to still be very wet, so don’t overdo this.

Transfer the mixture to a bowl to cool.

Use a clean hand to knead the mixture together thoroughly. This is important because the starch and konbu need to be hydrated to start binding the filling together. The mixture will still be more crumbly than a meat-based mixture, but it should be fairly sticky.

Now you just need to fold the filling into the Gyoza wrappers.

How to fold Gyoza

Although they add a decorative touch, the folds in Gyoza have a functional purpose. By pleating one side of the wrapper as you fold them in half, it causes the base of the dumpling to curve. This provides a stable base, which allows the potstickers to stand up in the pan so you can brown the bottom and steam the top.

It’s worth noting that Gyoza presses will mimic the decorative folds in the dumplings, but they don’t actually pleat them, so they will not stand up properly in the pan.

Before you start to fold the Vegetable Gyoza, prepare a bowl of water, a parchment-lined sheet pan, as well as a clean dish towel. Be sure you keep the wrappers covered to keep them from drying out. The following folding directions are for right-handed people, and you may want to reverse them if you are left-handed.

How to cook Gyoza

Gyoza are typically prepared by steaming and frying them, but they can also be boiled, in which case they’re called Suigyoza (水餃子). For this recipe, I’m going to show you how to cook these Gyoza using the traditional three-step process.

How to Make Gyoza Sauce

Making the sauce for Gyoza is as simple as mixing soy sauce and rice vinegar together. I usually use a 1:1 ratio, but depending on your preference, you can add more of one ingredient or the other for a sauce that’s more salty or tangy. Many restaurants in the US also add sugar to their sauce, but I personally don’t like my gyoza sauce to be sweet, which is why I don’t add it.

If you want your gyoza-sauce to be spicy, the traditional condiment is rayu, a kind of chili oil, but you can add any hot sauce or chili oil that you like. My personal favorite is my chili garlic oil (you’ll need to omit the dried scallops if you want to make it plant-based).

Originally a Chinese dumpling called Jiaozi, Gyoza is the Japanese transliteration of the name and an example of Wafuchuka cuisine (Japanese-style Chinese food). In the same way, Chinese-American cuisine has brought us classics like Chop Suey and Orange Chicken, Wafuchuka has produced dishes like Ramen and Karaage.

The Japanese version of these dumplings typically uses regular cabbage instead of napa cabbage, they have a more pronounced garlic flavor, and they’re wrapped in a thinner wrapper than their Chinese counterparts. That being said, an exchange of cultures over the years has led to many similarities between the two. It’s possible to find Jiaozi in China that are very similar to Gyoza.

Although Gyoza aren’t traditionally plant-based, it’s possible to find meatless vegan and vegetarian Gyoza these days, even in Japan.

How do you say dumpling in Japanese?

Because there are so many different types of dumplings, they are usually referred to by a specific name rather than as a generic—for example, gyoza, shumai, etc. The generic for Chinese-style dumplings is tenshin (点心).

How do you pronounce Gyoza?

Gyo-za has two syllables, and each one is pronounced as follows:

gyo is two sounds combined into one syllable. If you say the words “tag yo” quickly, the “g yo” makes the gyo sound.
za like zombie

Traditionally, potstickers are made with pork, so most store bought ones are not suitable for vegetarians and vegans, but with a few substitutions you can make plant-based Gyoza at home that are just as flavorful as the original.

Can Gyoza be folded ahead of time?

Can Gyoza be frozen?

Yes, after you’ve folded the Gyoza and placed them on a parchment-lined sheet pan, put the whole pan in the freezer until the dumplings are fully frozen. Then you can transfer the frozen potstickers to a freezer bag to store them. You can cook these frozen Gyoza in the same way you cook fresh ones; however, you will need to add a little more water and steam them for an additional 1-2 minutes. 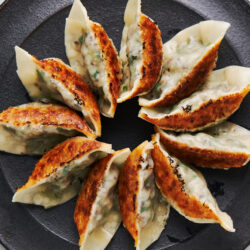