As the weather warms, my menus tend to go from simmered to steamed and from protein to produce. It’s partially because my body craves rich foods less, but it’s also a practical matter of keeping the apartment cool. Still, there are times when I crave some melty tender meat and these braised chicken tacos fill that need without taking the kind of apartment heating time a whole pork butt would require.

The braising liquid gets it’s sweet, earthy flavor from caramelized onions and a puree of dried ancho and guajillo chiles. It’s similar to the red sauce you’d find on an enchilada, only sweeter and with more flavor, thanks to the onions and tomatoes. The chicken cooks until you can easily shred it with a fork, this creates a matrix of tender chicken fibers that the sauce can cling to.

With street tacos, the meat is where it’s at, with the tortilla serving as a way to get it into your mouth. Condiments are filler at best, and at worst they can be a way to cover up the questionable nature of the meat. These chicken taco’s don’t need any condiments, in fact I could have eaten the chicken with a fork sin tortilla. I did want a little more richness though, so I sliced up some avocado and snuck them in. Flavor aside, if you close your eyes and take a bite, you could be fooled into thinking you were eating pork belly.

If you have some leftover chicken just add another can of chopped tomatoes and a can of your favorite beans for a chicken chili. This also freezes well so you can make a bunch ahead of time and freeze it in serving sized portions so you can have braised chicken tacos all summer long without having to run your air conditioning full blast. 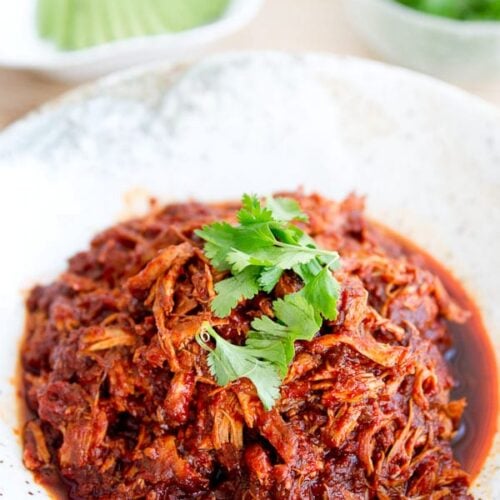 What do you think?39 Cancel reply