Although Japan has a relatively homogenous population, its food culture is a melting pot of culinary traditions from around the world. Taco Rice is an amalgamation of Texmex-style tacos and Japanese rice bowls, first created as a cheap yet satisfying meal for hungry US Marines based in Okinawa. It not only melds two form factors, but it also uses a mashup of ingredients like chili powder and ketchup with soy sauce and sake. It may sound odd at first, but trust me, it tastes sublime!

How to Make Taco Rice

Because making the taco meat goes so quickly, I usually like to whisk the ketchup, sake, soy sauce, and salt together in a small bowl first.

Then you want to saute the onions and garlic in a frying pan until they are tender and starting to brown. If you are making this plant-based, I recommend spending a little more time getting the onions fully caramelized to maximize their flavor.

Next, add the ground meat and use a spatula or wooden paddle to crumble it up. I like to add the chili powder when the meat is halfway cooked, so it has a chance to toast, releasing its aromatic oils.

When the meat is almost fully cooked, you can pour in the sauce mixture you made earlier and cook it with the meat until it’s your desired consistency. I like my taco meat a little on the saucy side so the sauce can season the rice underneath.

To assemble the Taco rice, put down a layer of rice on a plate and surround it with a ring of lettuce. Then you want to layer the hot taco meat and cheese on top of the rice. To finish it off, you can garnish the plate with tomatoes, cilantro, and crumbled tortilla chips.

What is Taco Rice?

Taco Rice is a rice plate created in Okinawa, Japan, that melds the fillings for Texmex tacos with Japanese-style donburi (rice bowls). Topped with taco meat seasoned with chili powder, soy sauce, and ketchup, it also has layers of cheese, lettuce, and tomatoes.

Taco Rice was invented by Gibo Matsuzo, the owner of Parlor Senri. It was a restaurant near the gate of Camp Hansen, a United States Marine Corps base in Okinawa, Japan. Although Parlor Senri has since shut its door, an affiliated chain called King Taco spread its popularity around Okinawa. These days, it’s become one of the most famous dishes from Okinawa and is enjoyed around Japan.

How do you pronounce Taco Rice?

Taco rice is a 5-syllable phrase that is pronounced as follows:

ta like tarp
co like corner
ra like the “ra” sound does not exist in the English language and the best way to make it is to say the word “romp” with the tip of your tongue at the front of your mouth.
i like even
su like soup

How do I make vegan Taco Rice?

You can make this plant-based by substituting the ground meat and cheese. You can use any plant-based meat crumbles like TVP or frozen and thawed tofu. To make up for the lack of umami-producing compounds in plant-based proteins, I recommend taking some extra time to caramelize the onions and garlic fully. You can also add some powdered vegetable bouillon or konbu powder to bump up the umami further. For the cheese, I recommend using my vegan parmesan. 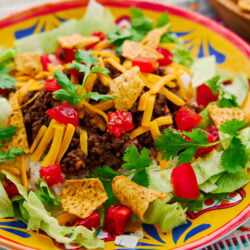