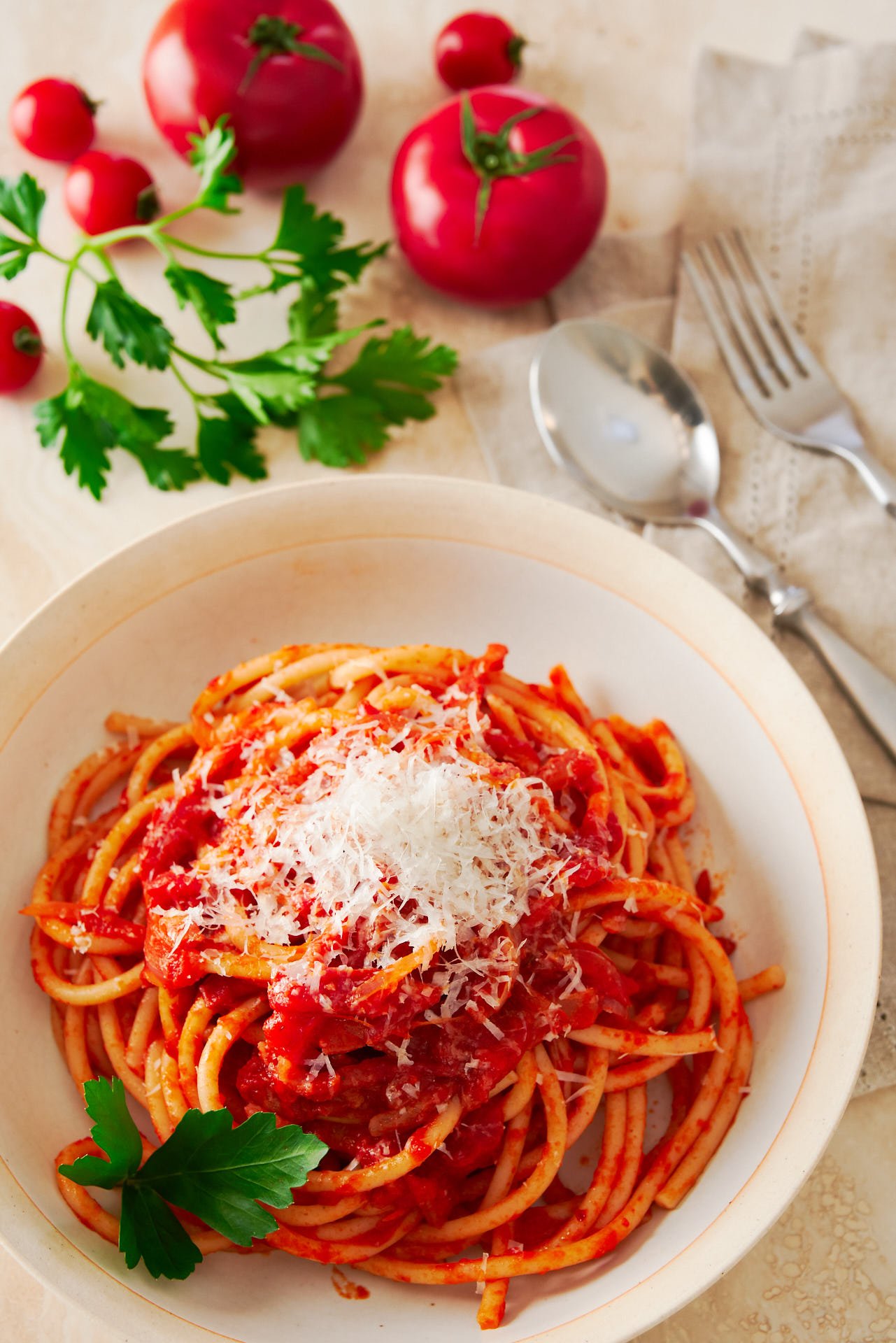 What is Bucatini all’Amatriciana

Created in the picturesque town of Amatrice in the mountainous Province of Reiti, Bucatini all’Amatriciana is a savory tomato sauce cooked with Guanciale and Pecorino Romano. Although tomato sauce may seem like the most fundamental of Italian pasta sauces, tomatoes are a New World food that was only introduced into Italy about 500 years ago. Its first recorded use in pasta was in 1790, which means that this dish came along sometime after that. It’s thought that the precursor to Sugo all’Amatriciana is a dish called Gricia which includes Guanciale and Pecorino Romano, but not tomatoes.

Like most Italian pasta sauces, Sugo all’Amatriciana is quite simple and can be put together in just minutes. Here’s a list of what you’ll need, along with suitable alternatives.

Guanciale is a cured pork product made from the jowl of a pig, which has been rubbed with salt and spices and hung to partially dry. It has a more intense flavor than other cured Italian meats like Pancetta and has a wonderful texture that bursts into a pool of creamy flavor with each bite.

Guanciale is one ingredient that’s worth finding, but if you absolutely can’t get it, Pancetta or any other unsmoked cured pork product that has a high-fat content can be substituted. One substitution I strongly discourage is using bacon. It may look similar, but the smoked flavor will overpower all the other ingredients, and your finished dish won’t taste much like the original. 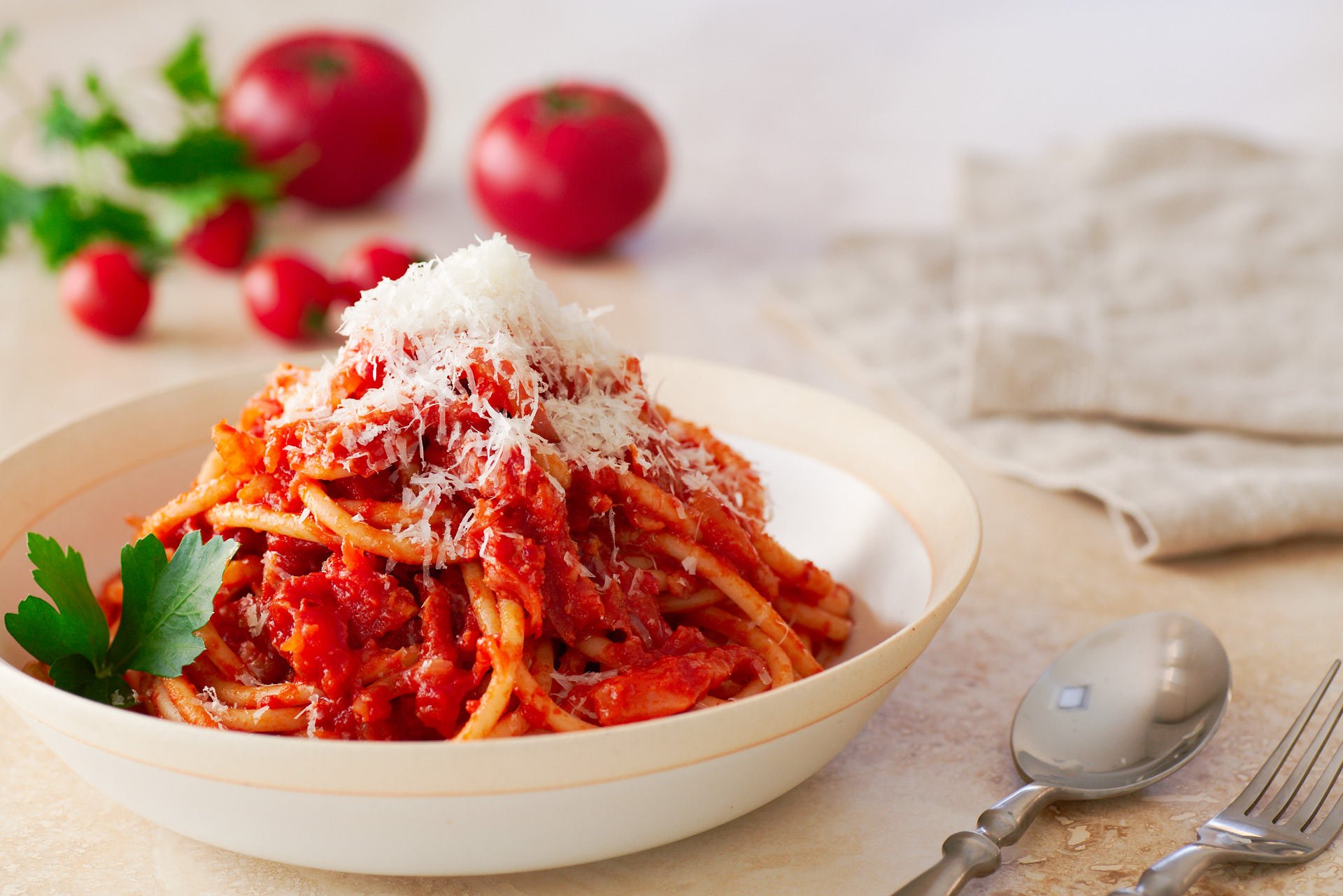 Red onions, or shallots, along with some chili flakes (or fresh chili peppers) are the only aromatics I add to my Bucatini all’Amatriciana. The onions provide a subtle sweetness, while the chili flakes bring some heat. It’s also worth noting that I don’t add garlic to my Amatriciana because it tends to overpower the other flavors in the sauce.

To speed things up, I like to add two forms of tomatoes to the sauce. The first is whole stewed tomatoes. In case you’re wondering why I chose the whole ones instead of the chopped ones, the tomatoes used for the chopped ones are picked before they are fully ripe so that they don’t turn to mush during the canning process. Because whole tomatoes hold their shape better, they tend to be picked riper, which makes them sweeter and more flavorful.

I also add tomato paste, which adds depth and sweetness, without having to cook the sauce for as long. If you don’t have tomato paste lying around, you can do without it, but I’d recommend taking some time to reduce the sauce more.

Adding cheese to the sauce when it’s almost done amps up the umami while rounding off the sharp edges of the tomatoes. I like to use Pecorino Romano, which is a hard sheep’s milk cheese that’s more creamy, salty and funky than Parmigiano Reggiano. It’s this rough, unrefined flavor that makes it the perfect compliment to the Guanciale. If you can’t find it, Parmigiano Reggiano will work in a pinch. 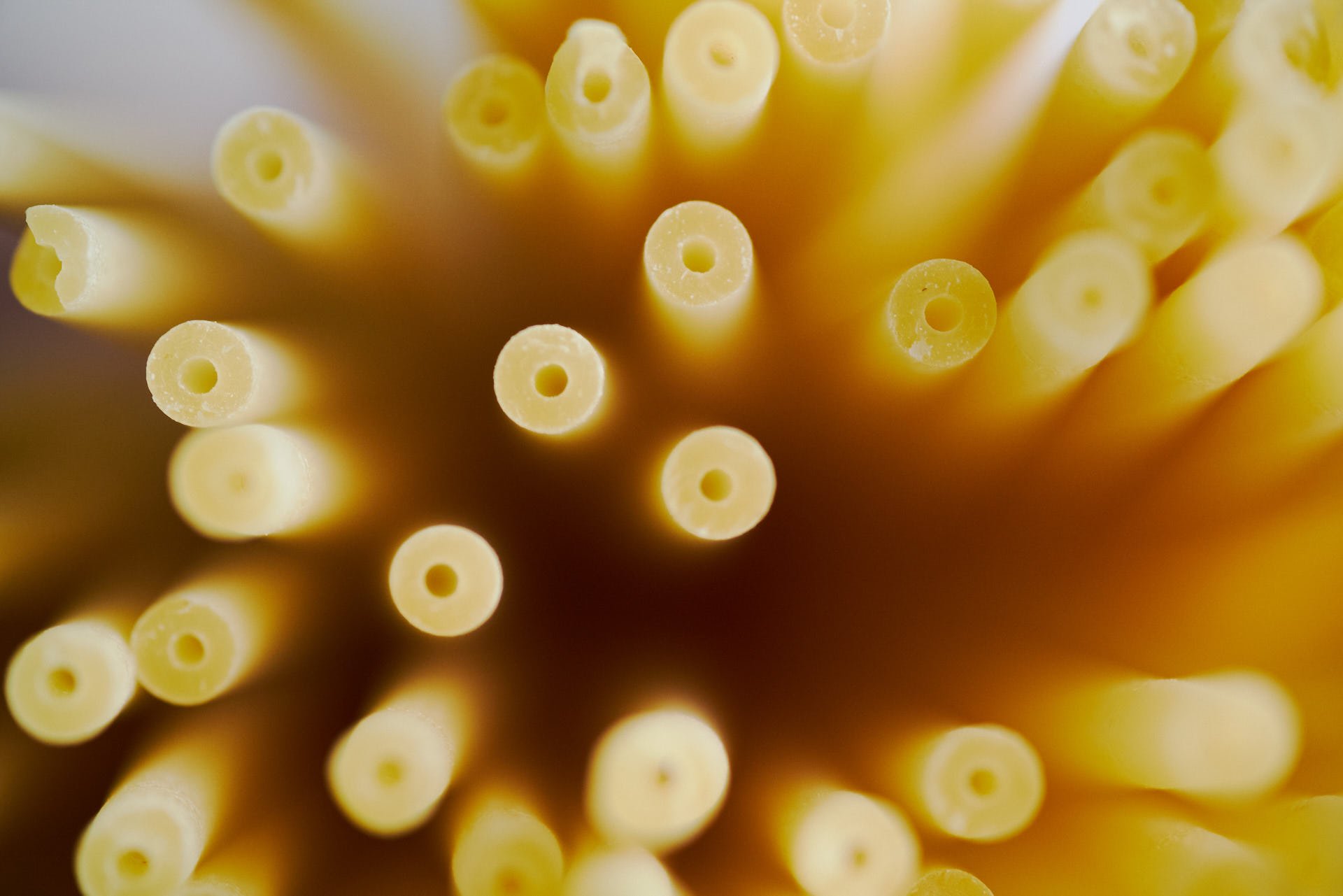 So now that you have a bangin good sugo that came together in just minutes, you probably wanna know what pasta to pair it with. The traditional choice (and my pick), is Bucatini. Buca literally means “hole” in Italian, and so the pasta gets its name from the small hole that runs through the center of each strand. This allows the noodle to be made quite thick, while still cooking in the same amount of time as spaghetti. The girth creates more surface area on each noodle, which allows them to hang onto thick chunky sauces like this Sugo All’Amatriciana without breaking a sweat. It’s not the easiest pasta to find though, so if you can’t get it, spaghetti will work fine.

How to make Bucatini all’Amatriciana

The first thing you want to do is to saute the guanciale in a bit of olive oil. Unlike some other cured pork products, guanciale won’t render out a ton of fat, which is why you need to start off with a bit of oil. You want a little browning at the edges, but don’t fry the guanciale until crisp.

To this, some red onions and chili flakes get added and sauteed. When the onions are tender and sweet, a splash of red wine goes in to deglaze the pan, and then the tomatoes, tomato paste, and salt get added and chopped up in the pan using a spatula. 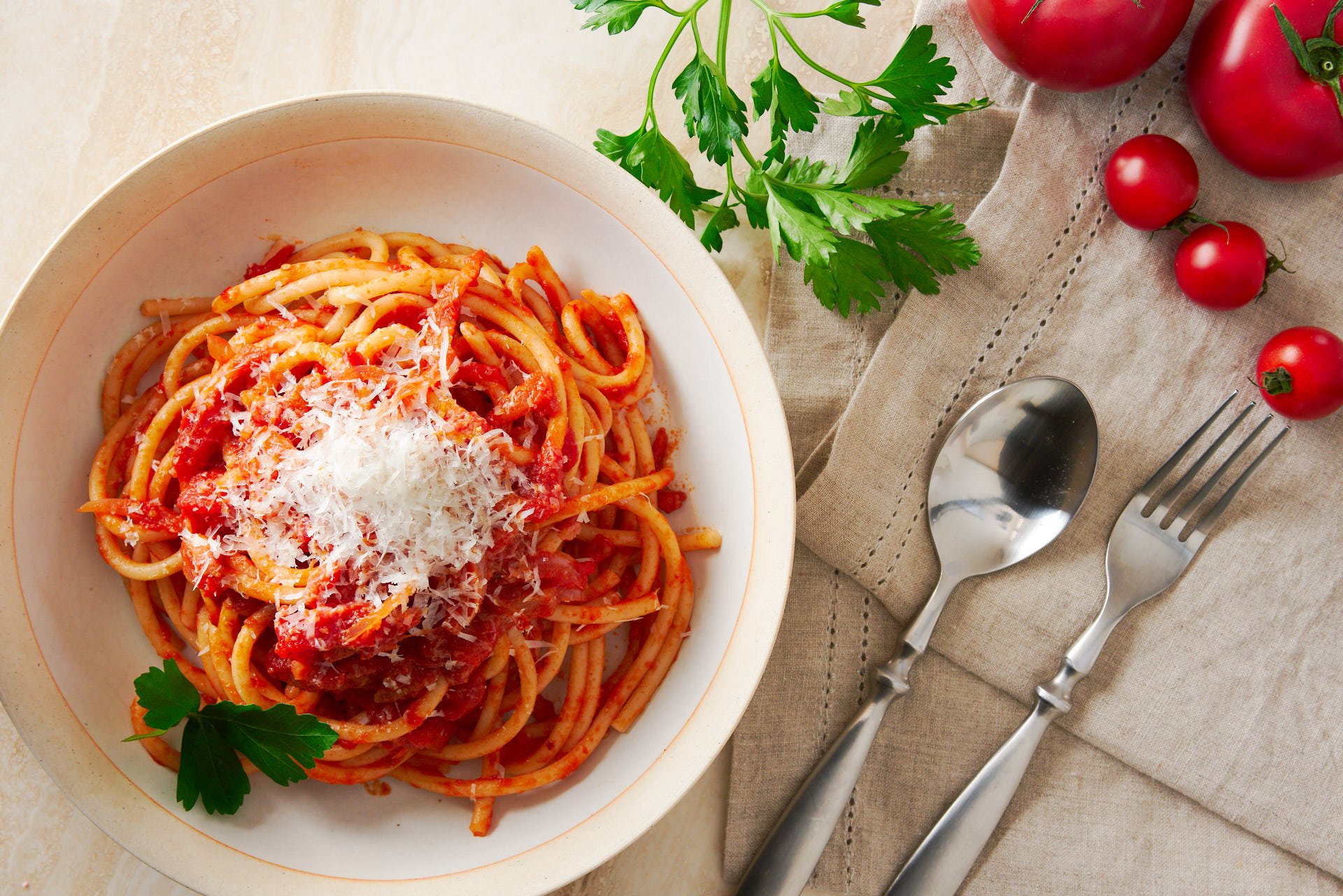 You can chop the tomatoes on a cutting board, but I like to break them up in the pan because it’s faster. The Bucatini gets cooked while the sauce is cooking down, and if you’ve timed things right, the two should be done, right around the same time.

To finish off the sauce, add the cheese and pasta and toss it all together. I usually boil the pasta for a few minutes less than what the package directions say, so I’m able to finish cooking it in the sauce. This allows the flavor of the sauce to permeate each strand of pasta while thickening the sauce. 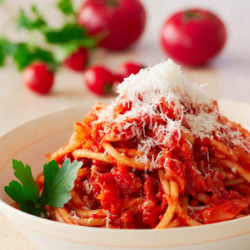 If you enjoyed watching this, please let me know by heading to my YouTube Channel and giving this video a like 👍🏼, Subscribing to my channel, and leaving a comment to let me know what you think. These videos take a ton of time to produce and it’s discouraging when I don’t get much feedback.