After making butter mochi a few months ago, which infuses the soft, chewy mochi with the creamy flavor of butter, I started to wonder what other kinds of hybrids between Japanese sweets and Western treats would be possible. Of course, as someone who’s addicted to all things cacao, my mind quickly wandered to chocolate mochi.

Inspired by chocolate truffles, which get their name from the knobby subterranean fungi from which they get their name, I created these decadent confections, which packs a triple dose of chocolate. In the center lies a sphere of chocolate ganache with a soft consistency that instantly melts in your warm mouth.

Since the ganache is too soft to hold its shape at room temperature, this is where the mochi comes in. By wrapping it in a thin layer of elastic mochi, it holds the chocolate together long enough to get it into your mouth. A generous dusting of cocoa powder outside keeps the mochi from sticking while adding an intense burst of chocolate.

How to Make Chocolate Filled Mochi

The ganache needs about 4 hours to chill and firm up, so you’ll want to start with it. In a microwave-safe bowl, add the chocolate, butter, and heavy cream. Put the bowl in a microwave oven and set it to 600 watts for a minute and a half. If you can’t set the power of your microwave, you may need to reduce or increase the amount of time, depending on how powerful the default setting is (it should say how many watts it is on the back of the unit). You can also do this in a double boiler.

Once the chocolate and butter are about halfway melted, remove it from the microwave oven and let it rest for half a minute. This will allow the residual heat to melt the remaining chocolate without overheating it. Next, use a spatula to mix it until it’s smooth and velvety. Finally, cover the bowl and refrigerate for at least four hours, or until the chocolate ganache is very firm.

For the mochi, you want to start by lining a square baking pan with parchment paper. I used a 5×5-inch pan, but a bigger one will work.

Add the mochi flour, cocoa powder, and sugar to a large microwave-safe bowl and whisk together until the ingredients are evenly combined.

Pop the chocolate mochi mixture into the microwave and cook it at 600 watts for two and a half minutes. Remove the bowl and use the whisk to mash up any big clumps of solidified mochi. Add the butter and whisk everything together until the butter is fully incorporated. You may still have some small lumps, but this is fine.

Put the bowl back into the microwave oven and set it at 600 watts for another three and half minutes. Now you want to use a silicone spatula or wet wooden paddle to knead the mixture until it’s smooth and elastic. The chocolate mochi is hot and sticky, so be careful not to let it get on your hands.

Once the chocolate mochi is smooth and stretchy, spread it into the prepared mold in an even layer. This is not necessary, but it makes it a lot easier to divide the mochi into equal-sized pieces later. Let this cool to room temperature. You will want to cover the surface with plastic wrap once it has cooled to keep it from drying out.

Once the ganache is ready to use, unmold the chocolate mochi and cut it into 16 squares (4×4).

Use a round spoon or a melon baller (I used 1/2 tablespoon) to scoop a sphere of ganache out of the bowl.

Pick up a square of mochi and flatten it with your thumbs, so it’s about 2-inches in diameter. Be careful not to press any one area too thin, or it will tear when you stuff it.

Put the ball of ganache you scooped out earlier into the center of the mochi and then wrap the edges around the chocolate. The ganache will melt on contact with your hands, and it will prevent the mochi from sticking, so try not to touch it directly. Pinch the seams of the mochi to seal it shut.

Roll the mochi around in some cocoa powder to keep it from sticking, and then round out its shape with your hands, being careful not to tear through the mochi. Repeat with the remaining mochi and ganache.

What is Chocolate Mochi?

How do you say chocolate mochi in Japanese?

Chocolate mochi is not a typical sweet in Japan, but if it were, it would probably go by the name Chocomochi(チョコ餅) or Choco Daifuku (大福); daifuku being the word used to describe mochi that is stuffed with something.

How to store chocolate mochi?

If you are eating this chocolate-filled mochi within a day, you can store them in a sealed container in a cool room; if you plan to keep them for longer than a day, I recommend storing them in the refrigerator. The ganache will solidify, but this can also be a fun texture. If you really want the center soft, you can put them in the microwave for a few seconds. 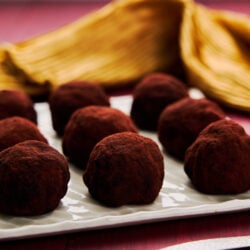