Daigaku Imo is a popular snack food in Japan that’s often found in street stalls, along with other traditional snacks like Taiyaki and Mitarashi Dango. It’s traditionally made by double frying Japanese sweet potatoes before glazing them in a sticky syrup.

In my version, I like to use a three-step process of steaming, frying, and glazing the sweet potatoes, which creates a crisp lasting exterior while the interior remains tender and moist.

How to Make Daigaku Imo

The first thing you need to do is prepare the Japanese sweet potatoes. I start by giving them a good wash, being careful not to scrub the skin off. Then I trim both ends off of each potato and cut them up using rangiri.

To do this, cut off a chunk of sweet potato at a 45-degree angle, and then turn the potato 90 degrees before cutting off another chunk at the same angle. This should allow you to cut the tapered tuber into pieces that are roughly the same size and thickness.

As you cut the sweet potato, be sure to put the pieces into a bowl of cold water to keep them from oxidizing.

Fill a heavy-bottomed pot with 2-inches of vegetable oil and preheat it to 340 degrees F (180 C).

Wash any excess starch off the potatoes, drain them, and then place them in a frying pan with 1/4 cup of water. Cover the pan with a lid, and then bring the water to a boil over medium-high heat. Steam the potatoes for another 5-6 minutes or until most of the water has evaporated.

Remove the lid and allow any remaining water to evaporate.

Once the sweet potatoes are no longer wet, add them to the preheated oil and deep fry them for about five minutes or until they’re golden brown. Be sure to turn them over regularly, so they brown evenly.

About 2 minutes before the sweet potatoes are done, add the rice syrup and sugar to the frying pan you used for steaming the potatoes and heat the mixture until the sugar is melted.

Use tongs to drain and transfer the fried sweet potatoes directly into the syrup and then toss everything together to coat the Daigaku Imo evenly. The mixture should be very sticky to ensure the sugar forms a crisp shell, but if it becomes impossible to mix or it seems like it’s starting to burn, add a spoonful of water to loosen things up.

Finish the Daigaku Imo by tossing in the black sesame seeds.

What is Daigaku Imo?

Despite having a relatively short history, it’s unclear exactly who created this treat. The consensus is that it was created near one of Tokyo’s major universities in the late 1920s or early 1930s. It quickly became a popular snack food amongst hungry college students, most likely where it got its name.

How do you pronounce Daigaku Imo?

Daigaku has three syllables, and Imo has two syllables. They’re pronounced as follows:

What is a Japanese Sweet potato?

All sweet potatoes were first cultivated in South America, but they were brought to Japan by the Portuguese in the 1600s. Known as satsumaimo (サツマイモ) in Japan, they quickly became a staple crop, due to their ability to make up for any shortfalls in the rice harvest. Through selective breeding, Japanese sweet potatoes have become a unique set of cultivars characterized by red skin and pale yellow flesh that becomes vibrant yellow as they’re cooked. They tend to be sweeter than Western varieties, but they also have a lower moisture content, making them dry if they’re not prepared properly.

Can I use a different kind of sweet potato?

As long as the sweet potato you are using is relatively low in moisture, this should work. Higher moisture varieties such as the orange-fleshed variety often found in the US will likely cause the candy coating to dissolve.

This recipe is entirely plant-based as long as you use vegan sugar. Some versions use honey or are fried in lard, though, so if you are ordering it at a restaurant, be sure to ask.

Can I oven bake Daigaku Imo

After steaming them, you can coat them in a generous amount of oil and then bake them on a parchment-lined sheet pan in the oven. They will not brown quite as evenly as frying them, and they won’t be quite as moist on the inside. They’re going to absorb a similar amount of oil as deep-frying, and this method takes longer and yields inferior results, so I don’t recommend it.

Can I pan-fry Daigaku Imo

You can pan fry them after steaming them; however, the browning will be uneven. They also tend to fall apart as you glaze them because they don’t get a uniform crust. 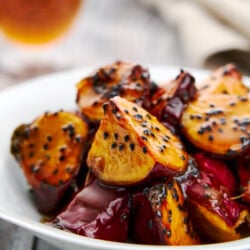