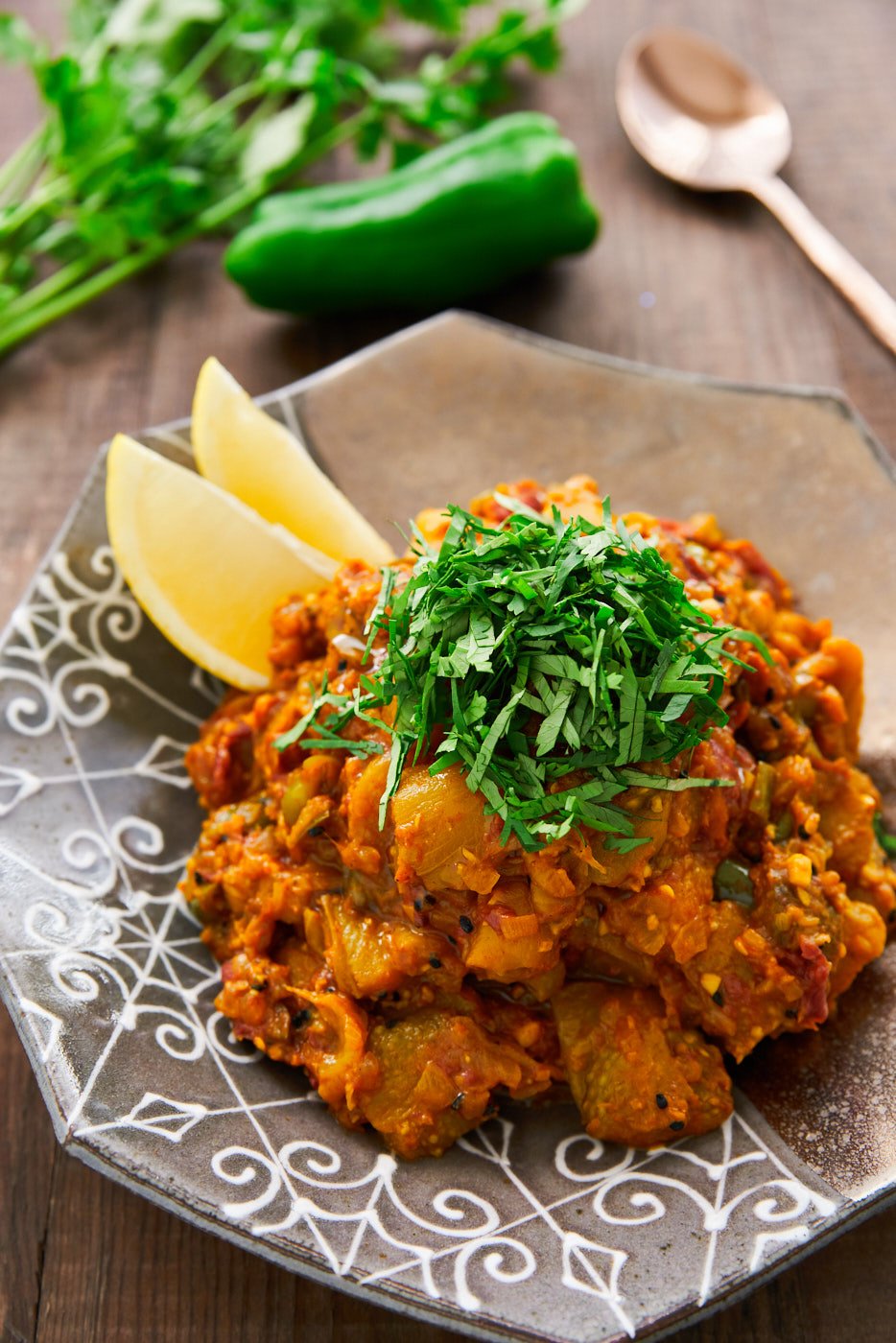 We’re finally starting to see summer’s bounty around these parts and amongst my finds this week was a bag of vibrant purple eggplants, sun-ripened tomatoes, and knobby green peppers. I passed an Indian restaurant on the way home from the market, and the savory aromas wafting through the air had me craving a spicy curry. Here’s what I came up with:

For eggplant curry, I like using small seedless eggplants for this, such as Japanese eggplants, because the seeds are almost non-existent. This makes them sweeter and more fleshy without any bitterness. If you can’t find them near you, any small variety of eggplant should work.

Baingan Bharta is usually made by chargrilling the eggplant, which gives it a pleasant smoky aroma, but this is both messy and time-consuming. I wanted to see if I could replicate the sweet, smoky flavor of the chargrilled eggplant without the effort, or cleanup. I found an ingredient in my pantry that does the trick, imparting a beautiful smoky flavor while making the preparation for this as simple as some chopping and stirring.

I’ve chosen to peel and cut the eggplant into relatively large cubes as I wanted the eggplant to have some substance. If you want a pureed eggplant curry, you can cut them smaller. You can also leave the skin on if you’d like, but after the long braise, they turn brown, and I like the tender texture of the eggplant better when it’s peeled.

The Aromatics and Other Veggies

The trick to imparting a lot of umami in plant-based recipes is to use ingredients containing a lot of amino acids, and then take advantage of the Maillard reaction to develop compounds that stimulate the umami taste receptors on your tongue. Since eggplant doesn’t contain a ton of amino acids, I rely on other ingredients to fulfill this role. 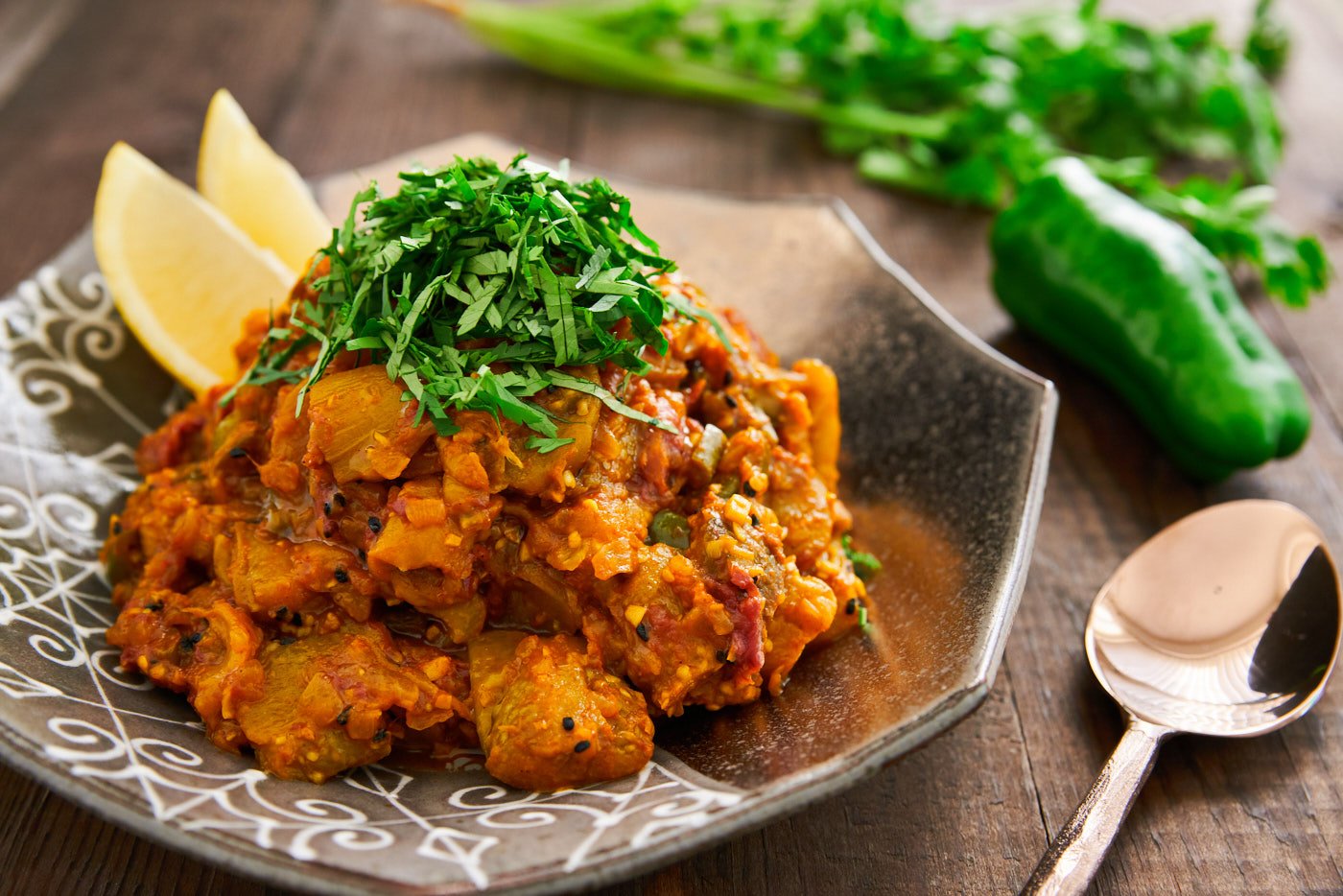 Both garlic and onions contribute an enormous amount of umami to any dish, which is why they’re a crucial part of my eggplant curry. I’ve also added some ginger here for flavor as well. To get the aromatics to caramelize quickly, it’s also important to dice them as finely as you can. The smaller the pieces are, the faster they will brown.

For the other veggies, I like to add ripe tomatoes and green peppers. The tomatoes are not only a source of liquid for the curry, but they also add a mellow sweetness and balance the creaminess of the eggplant with their fruity tang. If you can’t get ripe tomatoes where you are, try using cherry tomatoes. As for the pepper, I recommend using a mild green pepper for the flavor. If you want more heat, you can adjust the amount of capsaicin with cayenne pepper at the end.

Baingan Bharta is one of those dishes that doesn’t need a recipe, and this is especially true for the spices. You could go as simple as a tablespoon of curry powder if that’s all you have, but I have a pretty well-stocked spice drawer, and here’s what I did.

I added nigella seeds for their savory vegetal flavor that’s somewhere between onions, carrots, and oregano. Later on, some garam masala goes in for its balance of sweet and savory spices. It’s important to note that garam masala is merely a blend of spices, and every maker has their unique formula; this leads to a fair amount of variability in taste. My recommendation here is to find a brand you like and stick with it.

Remember how I told you I found a way to give this curry the smoky flavor of char-grilled eggplant without the hassle of grilling and peeling them? Well, the secret ingredient is smoked paprika. The paprika adds a subtly peppery sweetness to the curry while giving it a smoky flavor that will convince most people the eggplant was grilled.

Finally, some turmeric goes in for color, and I finish it off with cayenne pepper for heat.

If you’re going to use your own blend of spices, remember to fry whole spices like mustard seeds, cumin seeds, and cloves first. Then add the powdered spices after the wet ingredients have gone in, so they don’t burn. 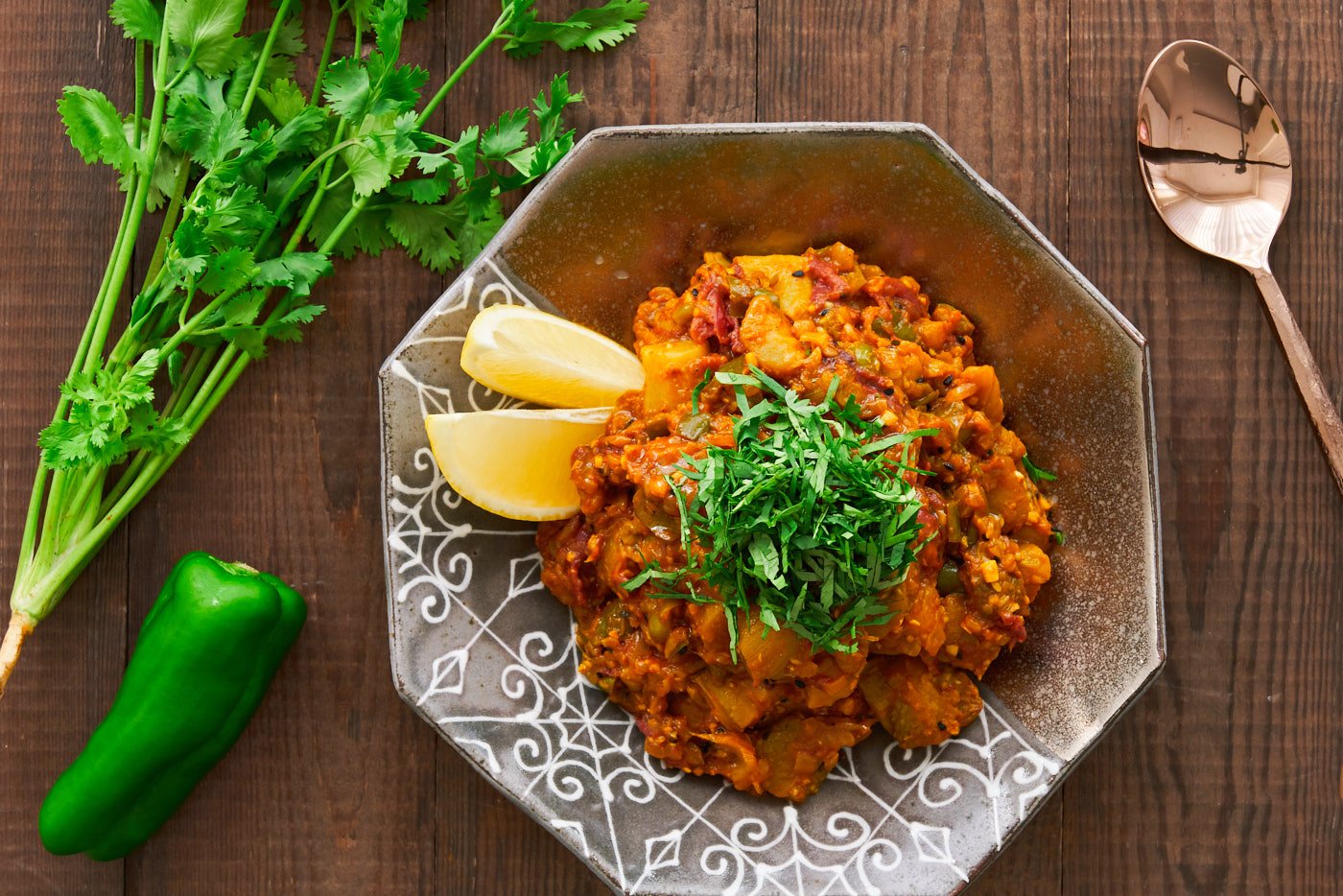 How to Make Eggplant Curry

Eggplants and tomatoes are over 90% water, so there is no need to add any water to the pan. The trick is to cook it over relatively low heat with a tight-fitting lid so that the veggies have a chance to secrete some liquid before things start burning. Once there’s a little liquid in the pan from the veggies it will create steam, which will gently cook everything without watering down your curry. If you’re worried about this, you can add a tablespoon or two of water before covering it, but it will take you a little longer to evaporate the water at the end.

Once the eggplants are tender, I remove the lid and boil any remaining liquid off. It’s important to gently stir the eggplant at this point, otherwise, it will burn. Once most of the liquid is gone, the Baingan Bharta will start to fry, caramelizing the sauce around the eggplant. This also coaxes out any excess liquid from the eggplant, leaving them rich, creamy and delicious. 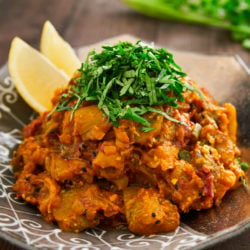