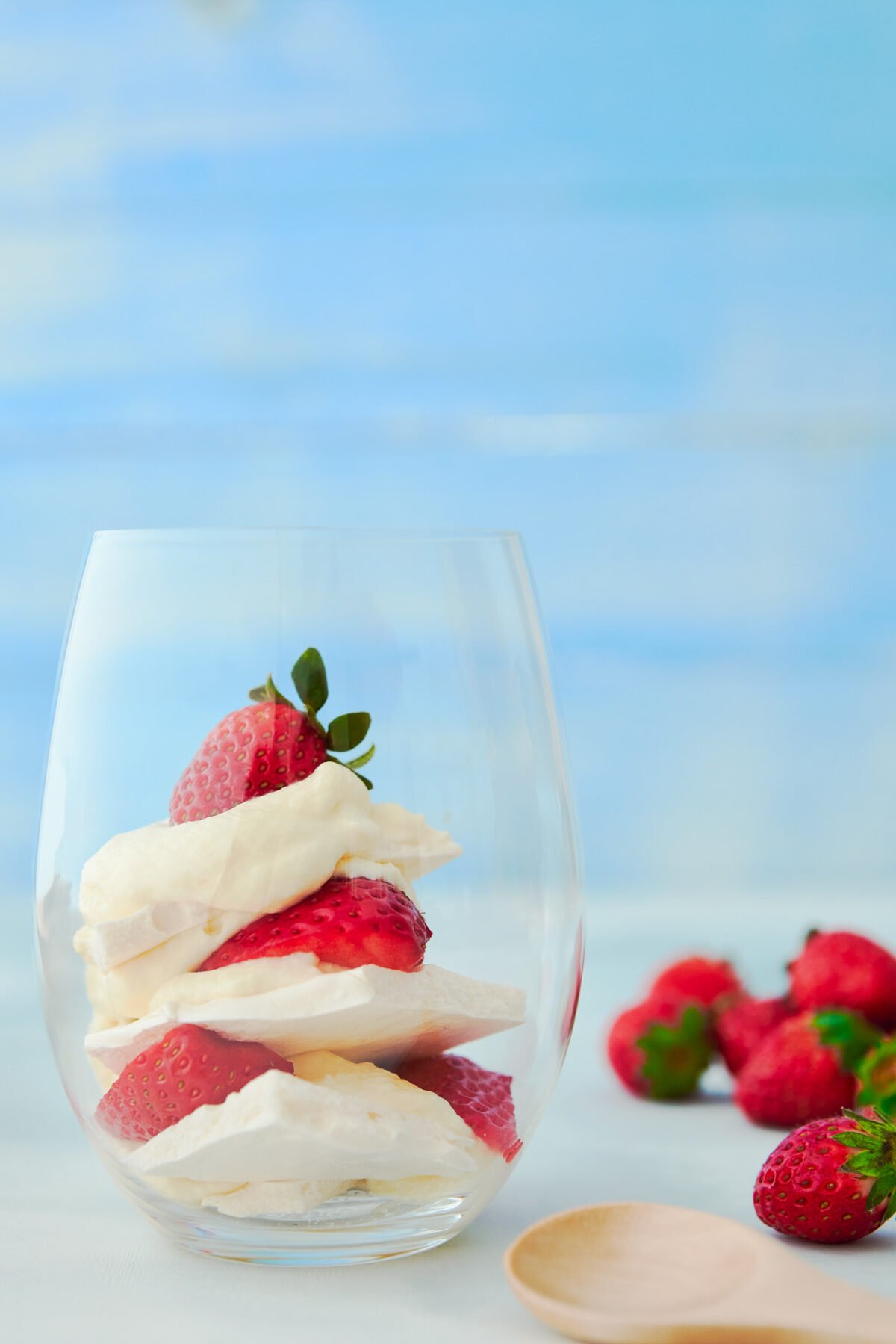 The British are often ridiculed for their food, but they make some of the best desserts ever! Eton Mess is easily my favorite, but I’m also a big fan of others, such as Summer Berry Pudding, Sticky Toffee Pudding, and Posset.

What is an Eton Mess

It’s an odd name for sure, but the first half of the name comes from Eton College where the dish is thought to have originated, and the latter half is descriptive. With crumbled crisp meringue and strawberries held together with sweetened whipped cream, an Eton Mess isn’t the neatest looking dessert in the world, but what it lacks in symmetry, it more than makes up for in taste.

How to make an Eton Mess

The components for this composed dessert aren’t all that complicated, but they do take a while to prepare. That’s why I usually make all the pieces ahead of time, so a little assembly is all that’s required when you’re ready to serve it. 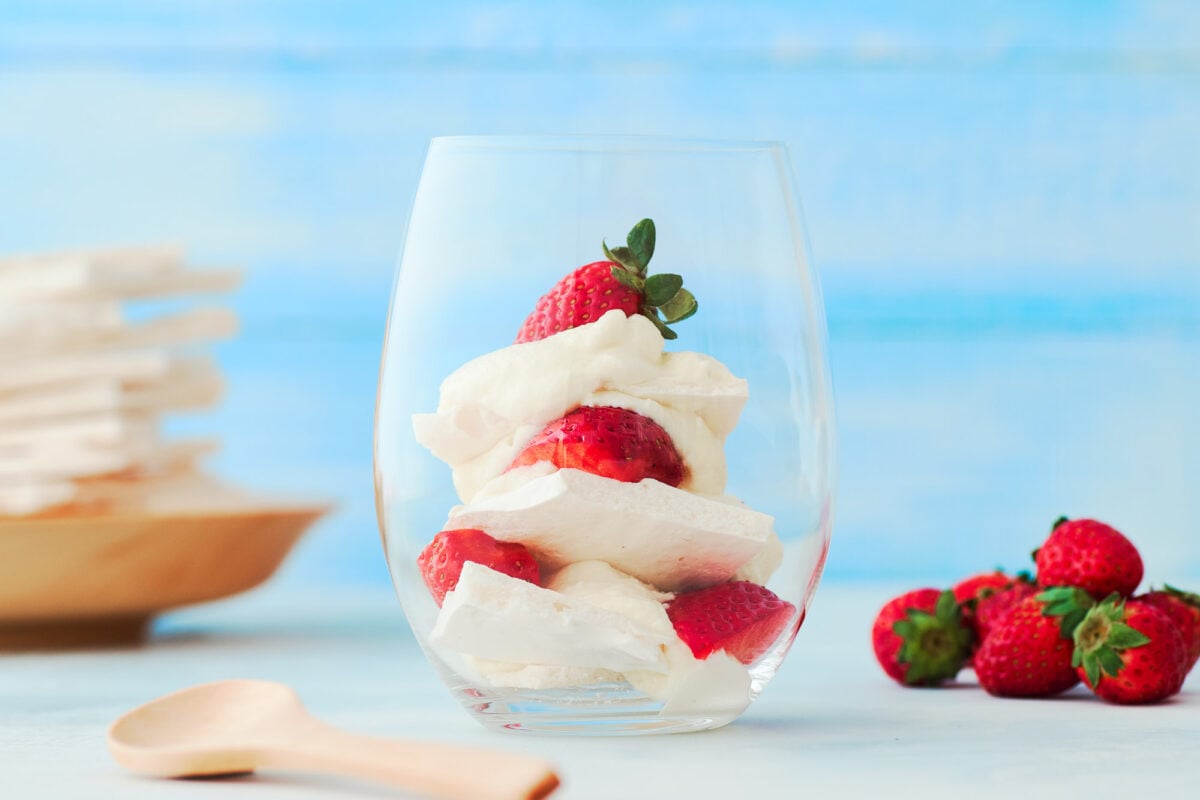 Although meringues may seem pretty straight forward, there are actually three distinct types: French, Italian and Swiss. While all three involve whipping egg whites and sugar into a foam, some are more finicky than others.

French vs. Italian vs. Swiss Meringue

The most common type in the US is a French-style meringue, which is prepared by whisking raw egg whites and sugar (and possibly cream of tartar) until they turn into a stable foam. The problem is that this type of meringue can break if your eggs are too fresh, or you over-whip them. Because the egg whites are raw, it’s also not safe to eat without cooking the meringue. Finally, French meringues are prone to weeping sugar after they’ve been baked because the sugar doesn’t always fully dissolve into the meringue.

An Italian meringue is made by whisking the raw egg whites together with a steady stream of molten sugar. The hot sugar partially denatures the eggs, which makes the foam more stable, and it should, in theory, be safer to eat. The problem is that it adds another complicated step, and pouring molten sugar into a moving mixer is a recipe for second-degree burns.

Swiss meringue is made by gently raising the temperature of the egg whites and sugar to 140 degrees F. This effectively pasteurized the egg, and because the proteins in the albumen are denatured, it results in an extremely stable foam, regardless of how fresh your eggs are. Also, the heating step virtually guarantees that the sugar is fully dissolved, so there’s no need to use a particular sugar. This is why I use a Swiss meringue for this Eton Mess (and for most desserts).

One thing you do need to be very sure of is that your whisk and bowl are very clean. Any residual oils (such as from a broken yolk) will cause the meringue to break. That’s why I like to use a glass or stainless steel bowl, as plastic bowls tend to retain some oil even after scrubbing them with soap and water.

Although I recommend using an instant-read thermometer for precision, you can still make this without one. Just heat the egg whites until they are hot to the touch. Although the sugar helps prevent the egg from setting, you need to keep it moving around the bowl constantly as the water bath is much hotter than 140 degrees.

When the egg is up to temperature, you can attach the bowl to an electric mixer and whip it, until it starts to form soft peaks. I like to add a bit of vanilla extract at this stage for flavor, but it will give your meringue a light tan tint, so if you’re going for white meringue, you may want to leave the vanilla out.

Once the meringue can hold firm peaks, it’s ready to bake. I like spreading it into a thin, even layer on a sheet of parchment paper. This not only helps it to crisp faster, but it also allows for some fun plating possibilities.

As for baking the meringue, I know it’s tempting to use a hotter oven to speed things up, but don’t do it. It needs to be cooked at a very low temperature for a long time, or the sugar will start to brown. 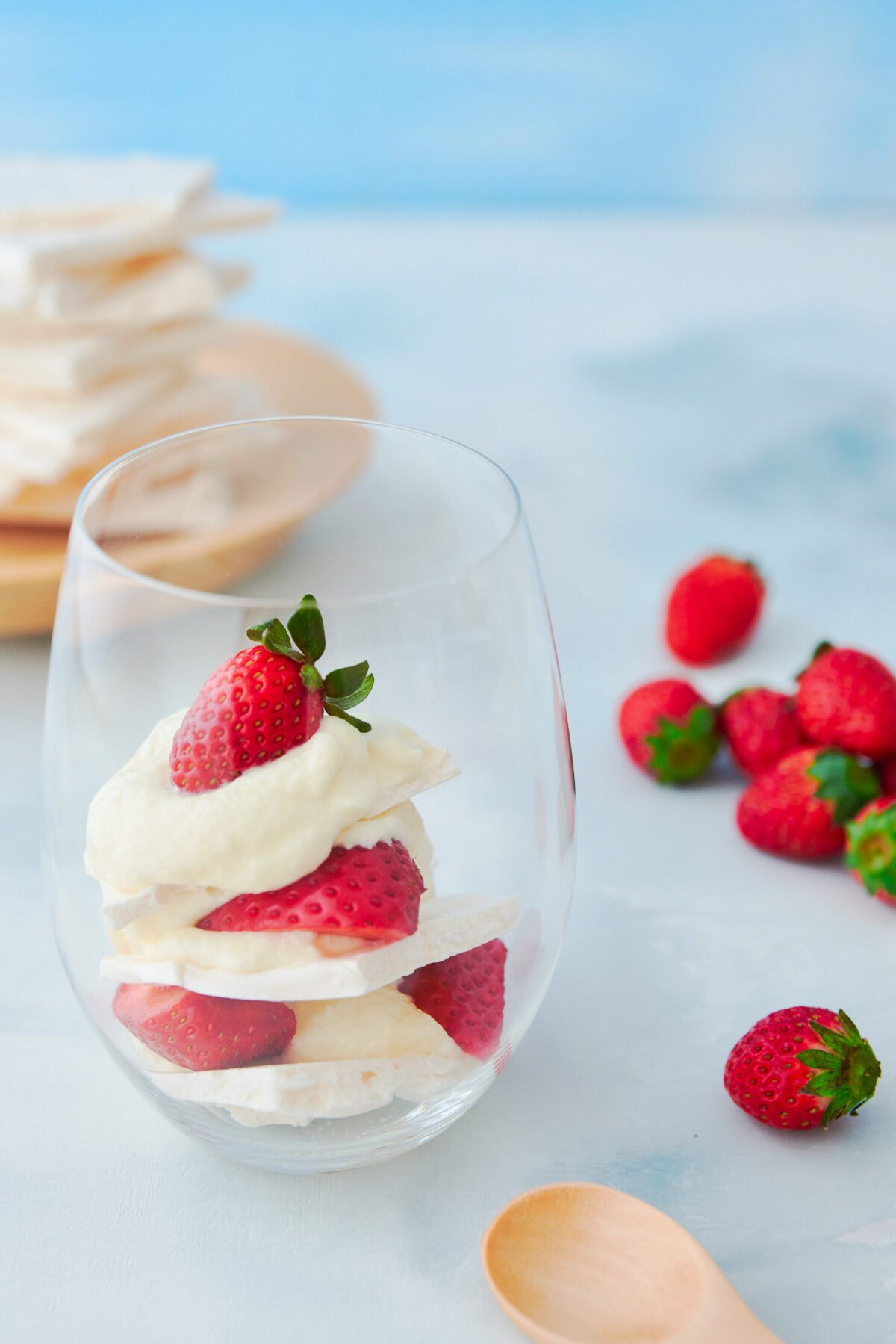 The traditional fruit for Eton Mess is strawberries, but you can use other types of berries, or fruit such as bananas, passion fruit, or peaches. Because both the meringues and cream are sweet, I like to add the fruit naked (i.e., without any sugar). If your strawberries aren’t very ripe, you can toss them in a bit of maple syrup or honey to help balance out their tartness.

In the UK, Eton Mess is made with whipped double cream (about 48% butterfat). It provides a rich, creamy counterpoint to the airy meringues and tangy strawberries, but it’s not the easiest thing to find outside the U.K.

For my version, I use heavy whipping cream (about 38% butterfat) to which I add in some melted white chocolate. This not only sweetens the cream, but it also adds a marvelous milky flavor that takes this dessert to the next level.

If you want to make this a little healthier (or you want to eat it for breakfast), Greek yogurt makes for a delicious alternative to the cream. 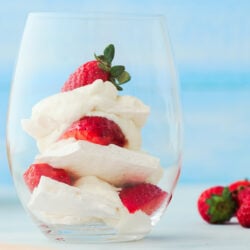