With a shatteringly crisp panko shell holding onto a plump juicy oyster on the inside, Kaki Fry is a popular way of preparing these delicious marine mollusks in Japan. Japanese fried oysters are typically eaten as an entre along with various sauces, but they also make for delicious appetizers.

Although Kaki Fry is considered a Western-style dish in Japan, a few key differences set this preparation apart from other deep fried oysters. The biggest distinction is that Japanese fried oysters are coated in panko. This gives the coating a thicker, crispier crust than oysters coated in Western-style breadcrumbs. I have a few culinary tricks in this recipe to make these the best fried oysters you’ve ever had, so let’s jump into it.

Do You Rinse Oysters Before Frying?

This is a topic that’s probably going to elicit some debate, so I want to give you some context. Western chefs will argue that the liquid in and around the oyster is where all of the flavors are, so washing an oyster is akin to washing a bag of potato chips.

Oysters are bivalves that feed by filtering water through their gills and trapping microorganisms, along with nutrients and organic particles, which they feed off of. Unfortunately, this also results in dirt and sand and undesirable microorganisms getting trapped in the gills. Although it’s not a very appetizing thought, oysters are basically living filters that clean our waterways and oceans. Like the filter on your AC or vacuum cleaner, they hold on to any contaminants in the water they’re raised in. That’s why oysters are considered dirty and are washed before being used here in Japan.

So what effect does washing have on the taste of the oysters? Anecdotally I’ve noticed that washing oysters before eating them raw makes them taste blander (presumably because of the lower salinity of tap water). Since cooked oysters will contain much less surface water than raw ones, I wanted to get a more objective measure on whether washing has an effect on fried oysters. To do this, I tested them three ways:

I didn’t have enough testers to make the test scientifically sound (sample size of 3), but most people said they couldn’t taste any difference between the preparations. The one consistent piece of feedback I got was that group 3 looked the best. This was due to the baking soda firming up the meat, causing the finished Kaki Fry to appear larger and plumper. One tester also noted that group 3 smelled less fishy than the other two. Since there doesn’t appear to be any downside to washing for cooked oysters (and some possible upsides), I’m going to recommend this method for cleaning oysters.

How to Fry Oysters

To clean the oysters, dump them into a bowl along with the baking soda, salt, and sake. Swish them around with your hand, being careful not to tear or smash them. Let the oysters soak for a few minutes while you prepare the other components of this dish.

Make the oroshi ponzu sauce by peeling and grating the daikon and then straining off the excess water with a fine-mesh sieve. Add the strained daikon, yuzu juice, soy sauce, and sugar to a bowl and combine.

To make the batter, whisk the egg and water until everything is evenly combined. Add the flour and mix this until the batter is smooth and free of lumps. Prepare a tray or bowl with the panko.

Now you want to rinse the oysters off. The best way to do this is to add cold water to the bowl and agitate the oysters before draining off the water. You want to get as much of the slime and grime off the oysters as possible, but you don’t want to let them soak in the water so long that they start to absorb the freshwater.

Next, you need to dry the oysters off very well; otherwise, they will spatter like crazy when you fry them. I usually lay down a few sheets of paper towels and place the drained oysters on top. Then I’ll pat the tops dry with some additional paper towels.

Once your oysters are cleaned and dried, add two inches of vegetable oil to a heavy-bottomed pan and preheat it to 340° F ( 170° C). Unless you are using a deep fryer, I recommend checking the oil temperature using an instant read thermometer throughout the frying process. Next, prepare a cooling rack by lining it with a few sheets of paper towels.

To bread the oysters with panko, pick them up by the dark mantle with chopsticks or tongs and dip them in the batter to coat every surface.

Drop the battered oyster in the panko and shake it around while scooping some breadcrumbs on top of them until they are evenly coated in a thick crust of panko. Transfer the panko-crusted oysters to a clean try. Oysters are delicate, so don’t press on them or handle them too much.

To deep-fry the oysters, lower them in batches into the hot oil using tongs or a slotted spoon and let them fry for a minute to set the batter and panko on the outside.

Once the crust is set, flip them over once and continue frying until the oysters are golden brown and cooked through. How long this takes will depend on how big your oysters are, but mine took about two to three additional minutes. If the oysters are sputtering and popping the moment you add them to the oil, this means you did not dry them off enough. If this starts happening after they’ve been frying for a while, this means the oysters are becoming overcooked. You’ll want to get them out of the oil as soon as possible.

Place the fried oysters on the prepared rack to drain and serve them as soon as you don’t see oil bubbling out of the panko anymore. They’re extremely hot and juicy, though, so be careful!

What is Kaki Fry?

Kaki Fry (カキフライ) literally means “fried oysters” in Japanese, and it’s a dish that fits within the Yōshoku (Western food) genre of Japanese cuisine. It’s made by breading oysters with panko and deep-frying them until they’re golden brown and crisp. There are several creation stories, but it’s most commonly associated with a restaurant in Ginza called Rengatei, which is also usually credited with inventing Tonkatsu as well as Omurice.

How do you pronounce Kaki Fry?

Kaki Fry is a 5-syllable name pronounced as follows (read the italicized parts.)

ka like copy
ki like key
fu like who
ra like the “ra” sound does not exist in the English language and the best way to make it is to say the word “romp” with the tip of your tongue at the front of your mouth.
i like even

Panko literally means “bread crumbs” in Japanese. It differs from Western bread crumbs because it’s made from the center (white part) of sandwich bread. This makes it less dense than traditional breadcrumbs, and the crumbs themselves tend to be much larger in size. The result is that foods coated in panko tend to have a lighter, crispier texture.

What to serve with fried oysters?

Kaki Fry can be served as is or in a sandwich. Typical condiments include lemon wedges, tonkatsu sauce, ketchup, mayonnaise, tartar sauce or hot sauce. Personally, I like serving my fried oysters with either ponzu or remoulade sauce. As with most Japanese fried foods, Kaki Fry is usually accompanied by a shredded cabbage salad. Leftovers also make a really good Kaki Fry Donburi. To make it, you can follow the recipe for my Chicken Katsudon, substituting the Kaki Fry for the Chicken Katsu. 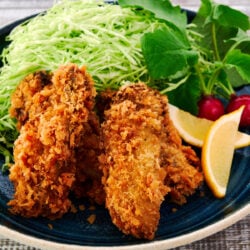