I know… the middle of summer isn’t really the season to be braising pork belly, but forgetting the soaring temperatures for a moment, this was so good I couldn’t wait until the cooler months to share this with you. I mean look at that photo, and tell me you’re not tempted to get your Dutch oven out of storage.

The glaze skirts the perfect balance between savory and sweet thanks to the addition of some Asian pear, and the heat from the gochujang is present but not overpowering. Because the pork is braised in the liquid before it’s reduced into the glaze, it’s much more complex in flavor than your typical barbecue sauce, and has umami in spades.

In terms of technique, there’s really not much to it. The pork belly gets browned to encourage the development of umami-rich fond. It’s braised with aromatics like garlic, ginger and scallions in sake and Asian pear puree with some gochujang and soy sauce until it’s fork tender. Then you just skim off the excess fat from the braising liquid and reduce it until it forms a thick shiny glaze.

The sweet and spicy pork pairs beautifully with some kimchi risotto, but this is also pretty awesome just served with some steamed brown rice. Leftovers (if you have any) make delicious Banh Mi 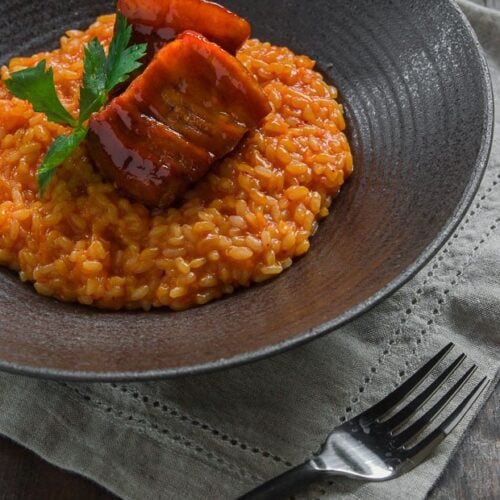