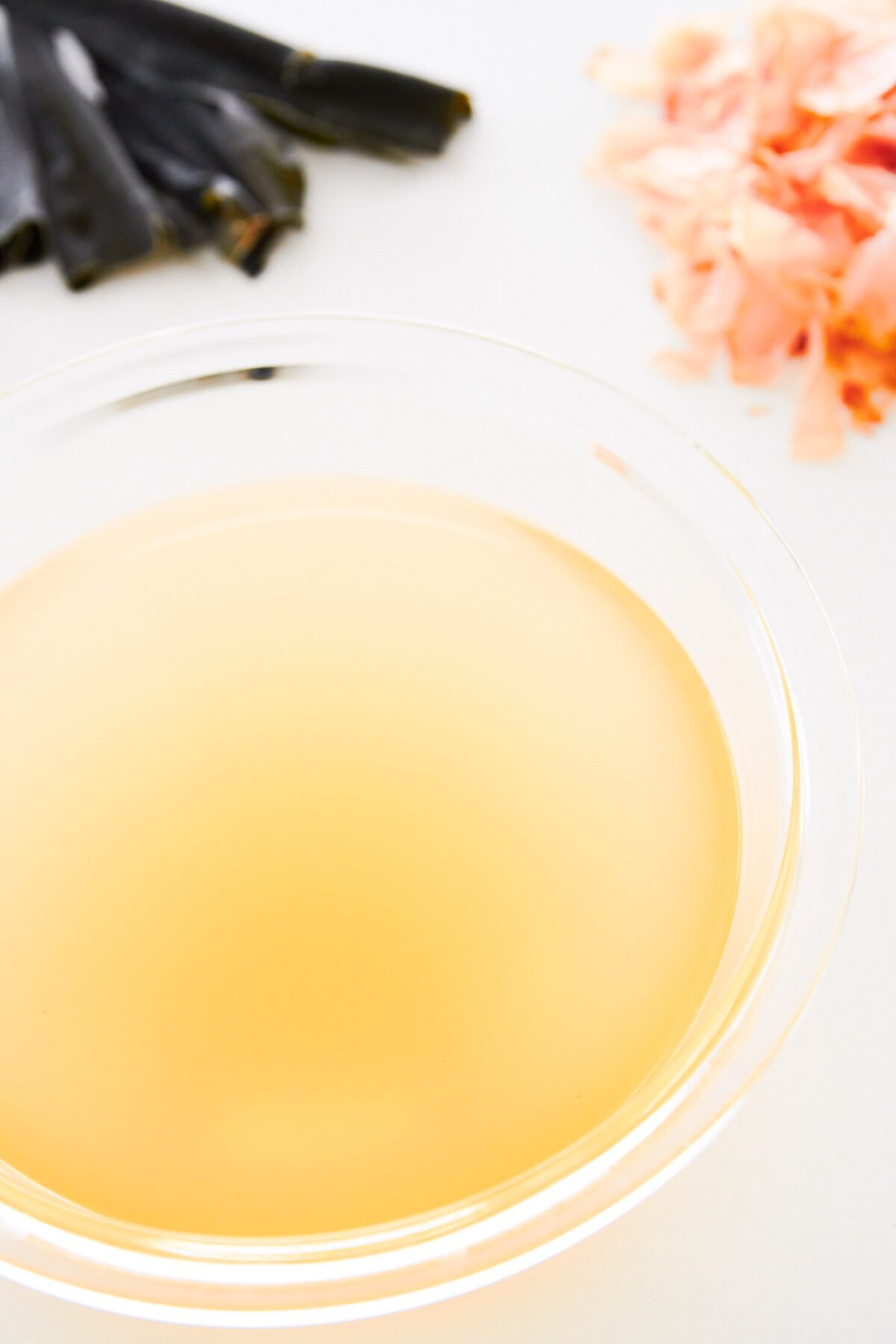 The first character 出 is the verb dasu, which means “to take out,” and the second character 汁 means juice or liquid. Read together; dashi literally means that the flavor from one ingredient has been taken out using a liquid. This makes dashi the generic word for soup stock in Japanese. If it’s not qualified with another word, such as yasai dashi (vegetable stock) or tori dashi (chicken stock), the word dashi alone usually refers to a traditional Japanese soup stock made with kelp and dried fish.

Hondashi (ほんだし) is a brand name which literally means “real dashi.” It comes in dried granules that look a bit like beige colored coffee crystals and melt almost instantly on contact with water. The irony here is that Hondashi is loaded with MSG and flavorings. While convenient and widely used, it’s not exactly a yardstick by which good dashi should be judged. These days there are many other equally convenient alternatives to making dashi from scratch, which is why I don’t recommend using instant dashi granules.

What about Dashi Packs?

Dashi packs are porous satchels holding powdered ingredients for dashi such as konbu and katsuobushi. They’re a relatively recent invention intended to bridge the gap between the ease of using powdered dashi granules and the flavor of making dashi from scratch. While there are many brands making dashi packs, the price is a relatively good indicator of the quality of the ingredients in the satchels. One of my personal favorites is a brand called Kayanoya, and their dashi packs are available in the US. 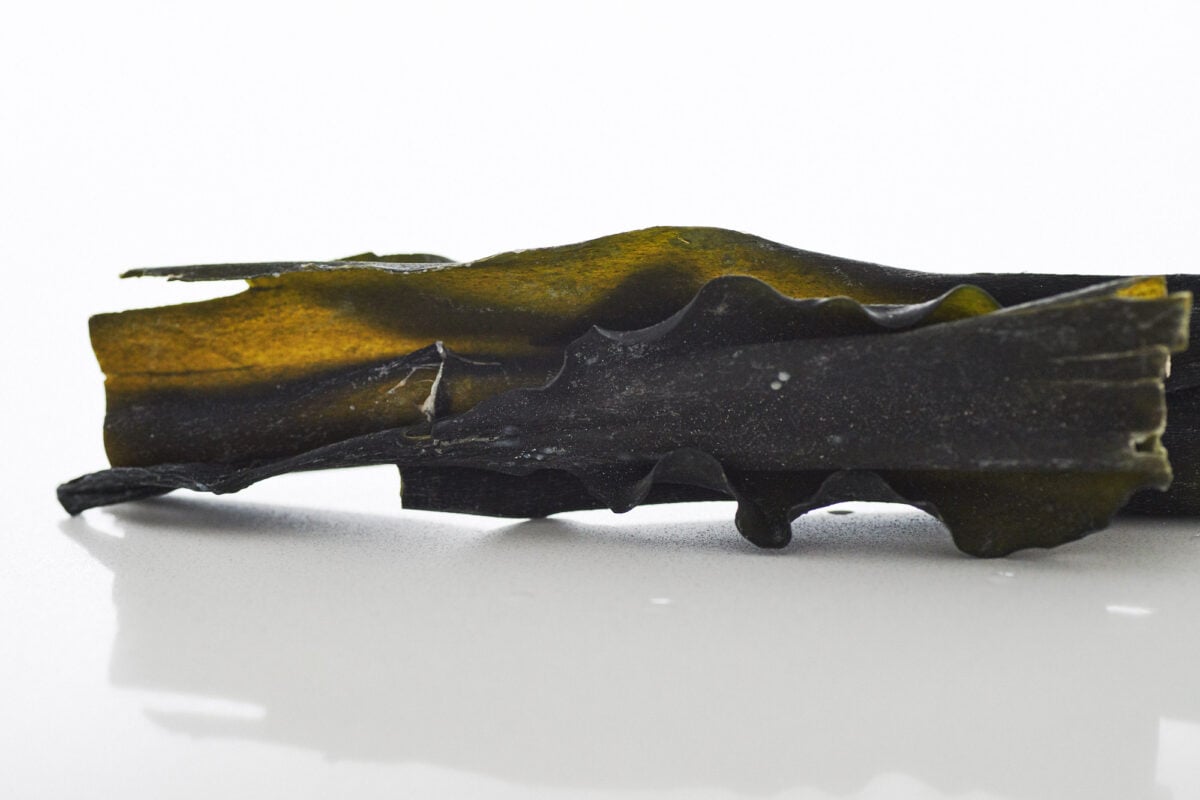 Like any living thing, the taste of konbu is affected by many factors including temperatures, currents, and the nutrients carried in those currents. The harvesting, processing, and curing of konbu can also have an impact on its flavor, and as a result, Japan has 45 types of konbu.

The northern island of Hokkaido is perhaps the most famous konbu producing region, and it’s divided into six areas making a variety of konbu including Rishiri (Northern Hokkaido), Rausu(Eastern Hokkaido), and Ma-konbu (Southern Hokkaido). Of these three, Rishiri is often regarded as the finest, due to the clear umami-rich dashi it produces. Ma-konbu is the workhorse of the bunch, making a light, clear dashi. The konbu from Rausu, on the other hand, is extremely savory, producing darker colored dashi that tastes almost meaty. This makes it well suited for use in plant-based cooking as it doesn’t really need the addition of dried fish.

Konbu makes such good dashi because it’s loaded with naturally occurring glutamic acids which stimulate the umami taste receptors in your mouth. A Japanese chemist named Kikunae Ikeda, isolated this compound from konbu, which became a basis for the chemically synthesized food additive monosodium glutamate. Before you freak out and ban konbu from your pantry, glutamic acids are found in almost all plants and animals (including humans). Since proteins are just amino acids (such as glutamate) linked together to form chains, our bodies are literally built out of these compounds. 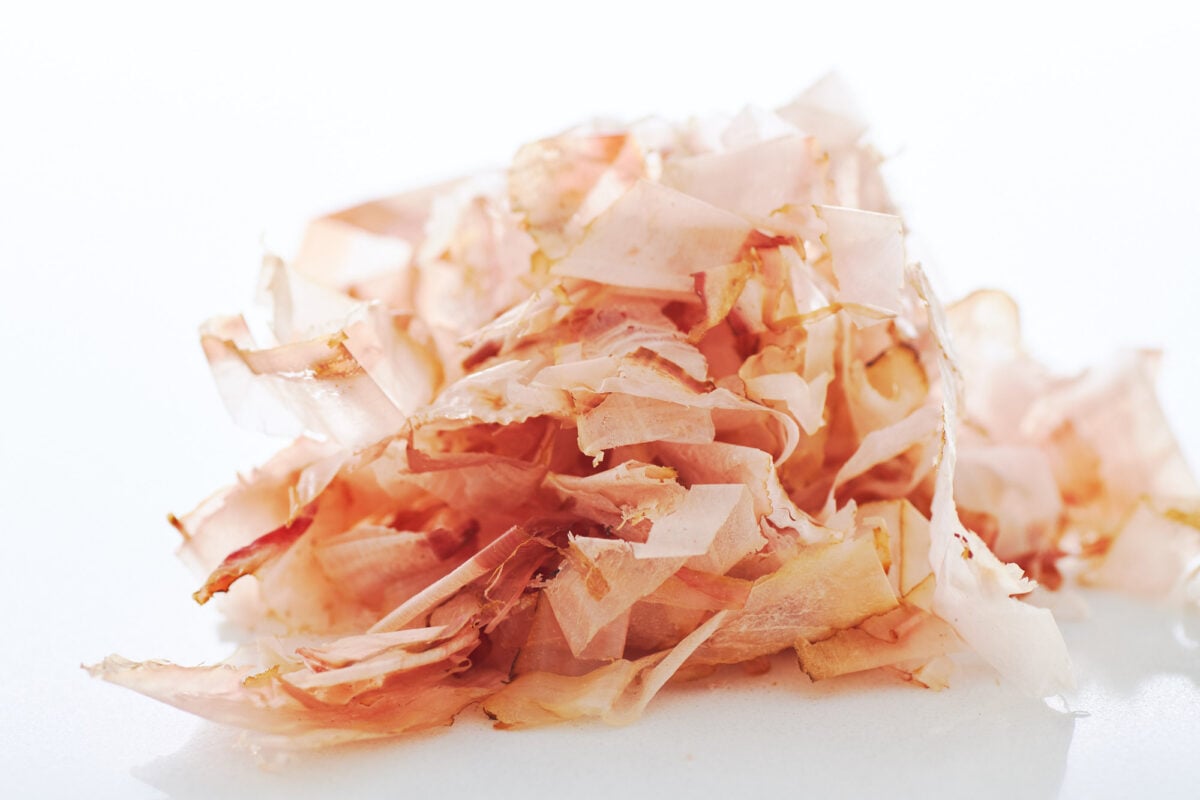 When paired with konbu, katsuobushi is the most common ingredient for making Japanese dashi. The process starts by filleting, cooking, drying and smoking Skipjack Tuna. To save time, many places these days will fully dry the smoked fillets at this point, trimming off the black exterior; the resulting aragatsuo (荒節) is then shaved into flakes which are sold as hanakatsuo (花鰹).

For a true katsuobushi, there’s a final fermentation step involved. The smoked fillets of tuna are inoculated with Aspergillus Glaucus, and left to ferment and dry. This last step can be repeated several times to create higher grades of Katsuobushi known as karebushi and honkarebushi. Within Japan, Makurazaki (Kagoshima), Ibuski (Kagoshima), Yaizu(Shizukouka), produce the bulk of Katsuobushi; however, there are now factories around the world producing low-quality knock-offs to meet growing international demand.

In addition to glutamic acids, katsuobushi also contains a high concentration of inosine monophosphate (IMP), which is another compound responsible for triggering the taste of umami. Together, these compounds have a synergistic effect which is why dashi is often made using both konbu and katsuobushi.

Niboshi (known as Iriko in Western Japan), is another type of dried seafood that creates strong dashi that is relatively fishy. It’s typically made by boiling and drying baby fish (usually Japanese Anchovies). Although dashi made with Niboshi is used throughout Japan, it’s most commonly used on the island of Shikoku.

Also known as yakiago (焼きあご), this ingredient is made by partially drying and then grilling flying fish over charcoal before fully drying it. It produces robust umami-rich dashi that’s smoky, and slightly fishy. It’s most commonly used on the southern island of Kyushu.

Most commonly used for plant-based Shojin Cuisine (精進料理), shiitake dashi can also be blended with other types of dashi to add another dimension of flavor to seafood-based dashi. Unlike with dashi made from dried fish, shiitake dashi is made by soaking dried shiitake mushrooms in cold water. Depending on the size of the shiitake, this process takes anywhere from 2-3 hours, but it can also be left to soak overnight. The resulting liquid is your dashi, and you can use the rehydrated mushrooms for something else. 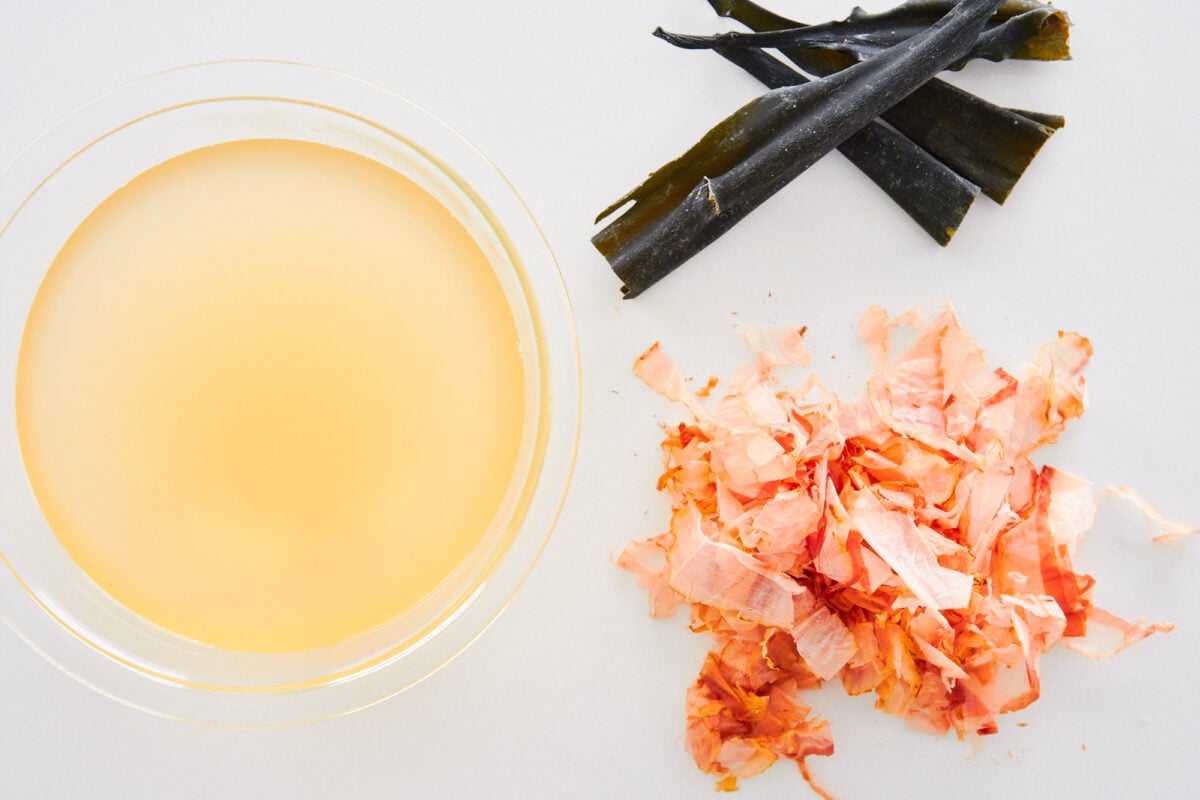 How to make Dashi from scratch

Before I get started, I should mention that there are many ways of making dashi, and what I’m going to share with you is a method I learned from a Japanese chef that I’ve refined over the years.

Unlike making a Western-style stock, dashi only requires a few minutes of cooking time. That being said, you do need to plan ahead, as the first stage requires soaking the konbu in water overnight. I usually do this in a water bottle because it’s easier to store in the fridge, but you can use a bowl, or even the pot you plan to make the dashi in.

The main reason for cold extracting the flavor from konbu (as opposed to boiling it) is that konbu releases a mucilaginous compound when cooked, and it’s typically not desirable to have viscous dashi. Also, some varieties of konbu can be quite thick, and the short cooking time for dashi is not sufficient to fully rehydrate the konbu.

The resulting stock from this first stage is called konbu dashi (昆布出汁). It’s a plant-based stock that’s loaded with glutamic acids which are the naturally occurring amino acids in konbu that stimulate the umami taste receptors in your mouth. While konbu dashi can be used as is, it’s usually fortified by adding some dried seafood such as katsuobushi.

Unlike konbu, katsuobushi requires the application of some heat to get the flavor out of the flakes. Applying too much heat, however, results in the extraction of some harsh flavors that are a result of the smoking process. This is why I like to bring the konbu dashi up to a boil and then cut the heat before I add the katsuobushi. Then, I let this steep for 3-4 minutes before straining the dashi. 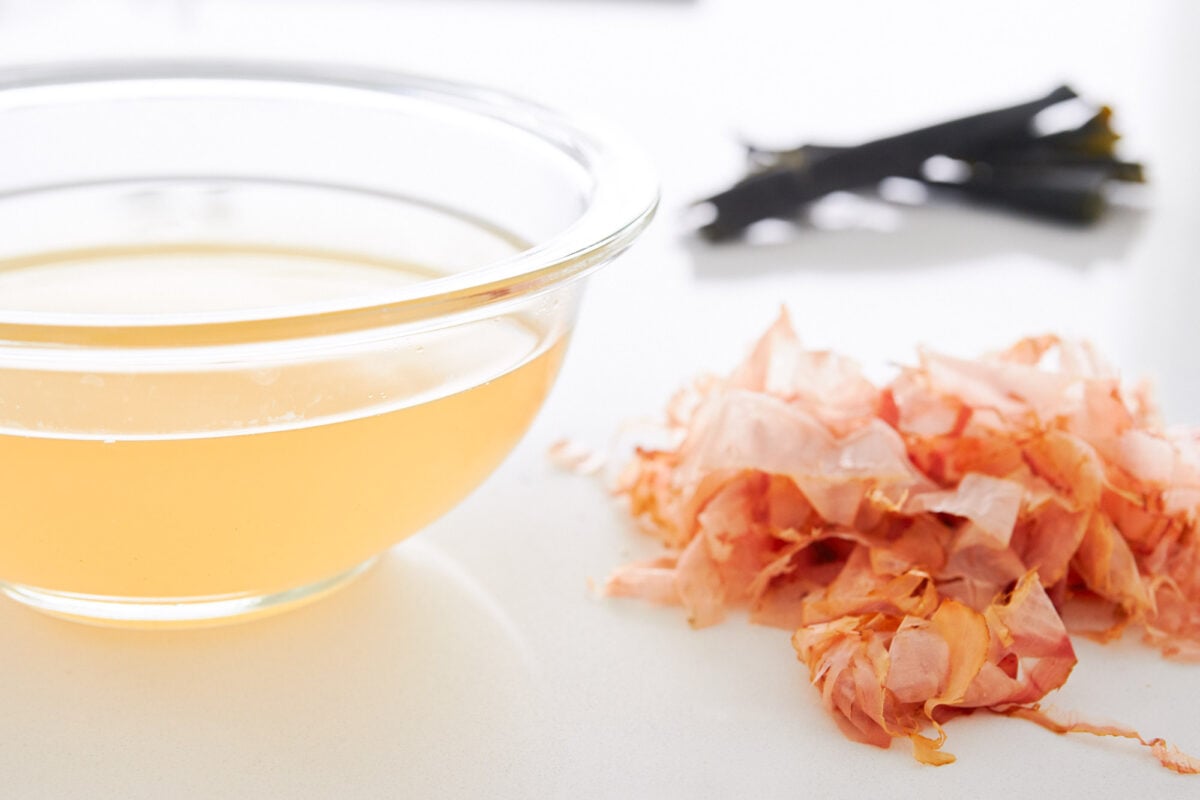 How to use Dashi

Dashi is a pillar of Japanese food, and is one of the ingredients that gives Japanese food it’s distinct flavor. Here are just a few Japanese Recipes that feature dashi as a primary ingredient: 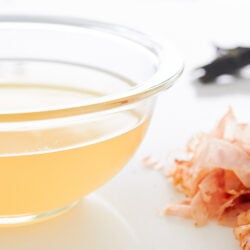 What do you think?20 Cancel reply

How to Make Dashi