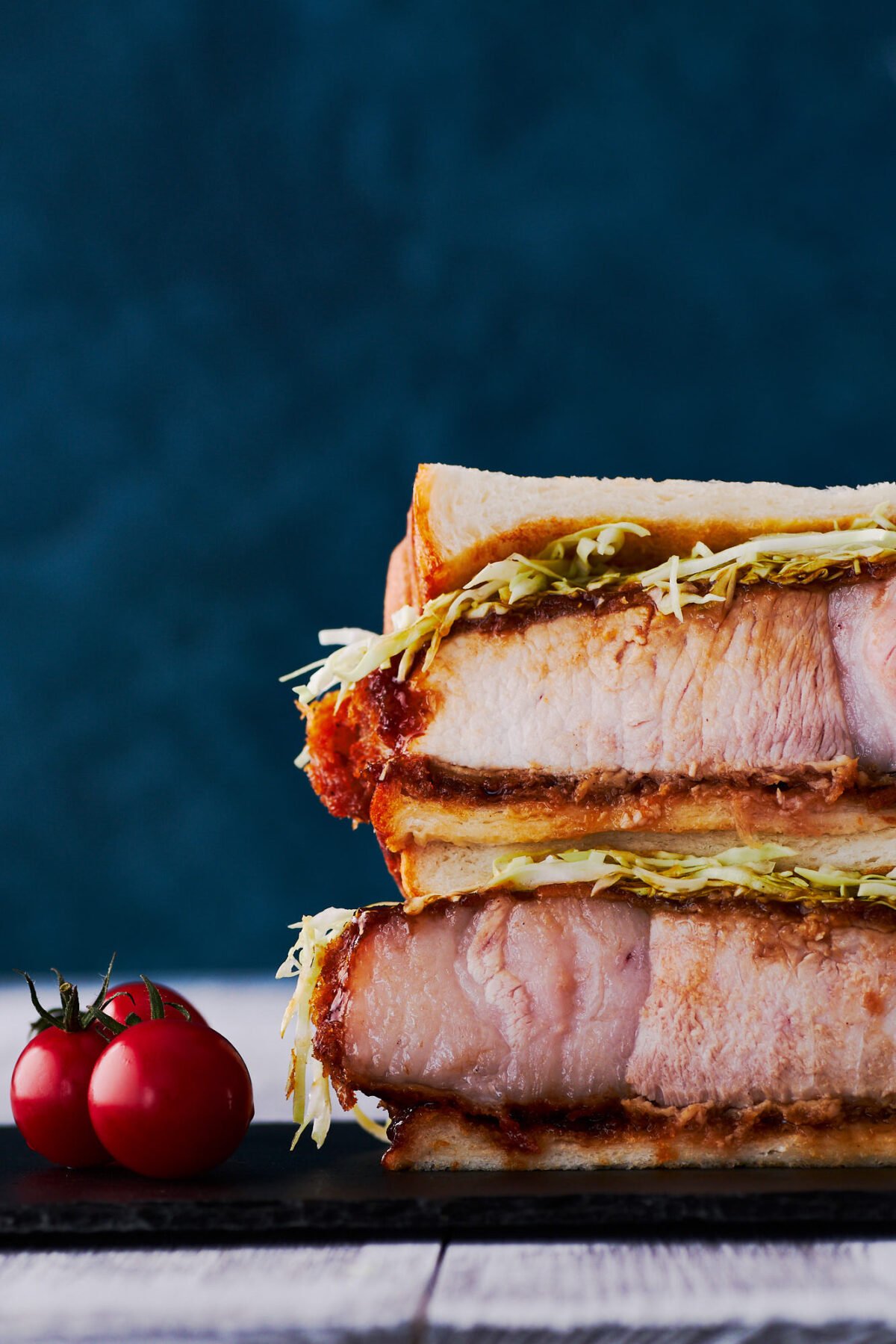 What the heck is a Katsu Sandwich?

Unless you’ve been hiding inside an Instant Pot for the past year, you’ve probably heard of these ridiculous $100-$200 sandwiches sweeping the World. So what the heck is Katsu anyway?

Well, Katsu sandwiches are originally from Japan, where “cutlet” is transliterated to katsuretsu (カツレツ) and then abbreviated to katsu (カツ). You might also hear of these referred to as Katsu Sando because the word for sandwich is sandoichi (サンドイッチ) in Japanese, which is usually shortened to sando (サンド). Are ya still with me?

Despite the eye-watering prices outside Japan, Katsu Sando are an on-the-go fast food in Japan and don’t usually command prices over $10 (though there are some exceptions). The big difference is that most Katsu Sando in Japan are stuffed with Tonkatsu, which is made with Pork. The extravagant sandwiches in the US and elsewhere are often filled with Gyukatsu (beef cutlet), which tends to be a lot more expensive, especially if they’re using genuine Wagyu (fake vs. real Wagyu is a topic for another post).

To keep the costs of this one down, I’m going to be making a more traditional Japanese-style Tonkatsu Sandwich, but let me know in the comments if you wanna see me make an over-the-top Wagyukatsu Sandwich. 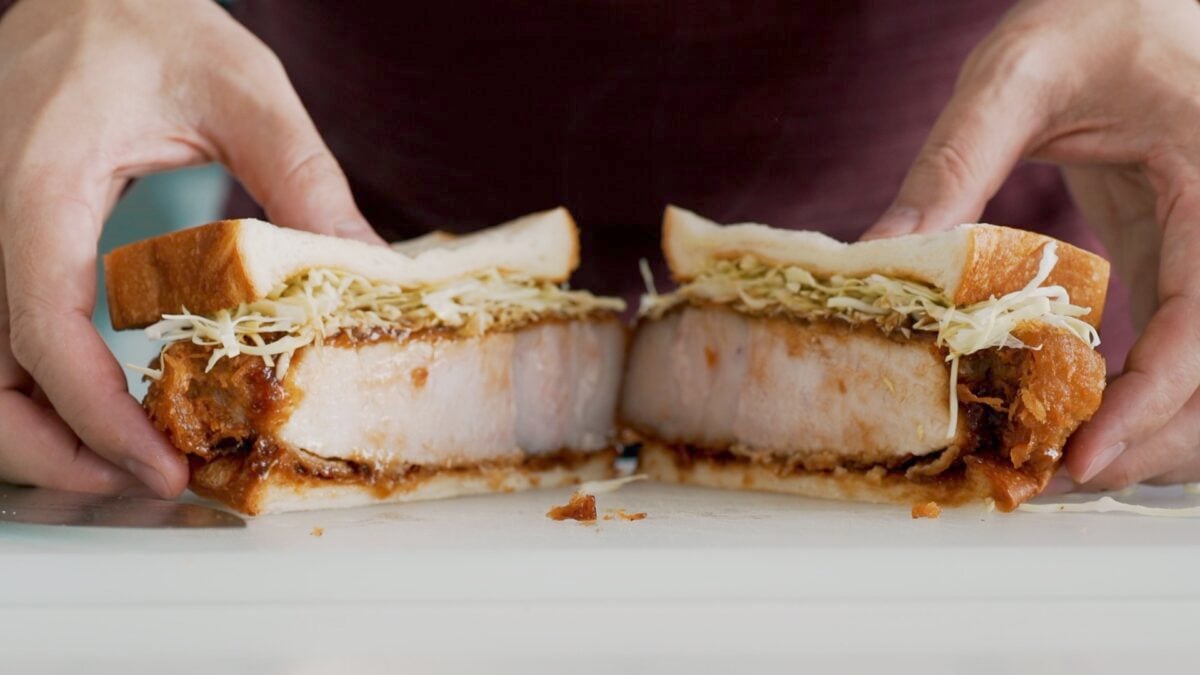 Whether you’re talking about the contrast of the tender bread with the crisp crust and the juicy pork, or the sweet, savory and tangy sauce, Katsu Sandwiches are all about contrasts. That’s why I chose my ingredients to highlight those juxtapositions in tastes, textures, and flavors.

Regardless of whether you’re using beef or pork for your Katsu Sandwich, the meat needs to be tender. That’s because it doesn’t get sliced as it would in a steak sandwich or a roast beef, and it becomes especially important when you’re doing a thick cut Katsu like in my version. When it comes to meat, there’s often an inverse relationship between tenderness and flavor (i.e., more tender = less flavor), so you’ll have to figure out what works for you, but in order of tenderness(most to least), the usual cuts for Tonkatsu are tenderloin, loin chops, and rib chops. I like using rib chops if the quality of the pork is excellent as this will get you the most flavor, but make sure it doesn’t have a lot of gristle or connective tissue and be sure to trim off any excess fat. I used Kurobuta for my Katsu, which you can read more about in my Tonkatsu recipe.

It’s also worth noting that a lot of the cheaper Katsu Sando shops in Japan use reconstituted meat, as it allows them to make them both tender and flavorful with a consistent shape that fits perfectly in the bread. Personally, I’m not a huge fan of this style for obvious reasons.

If you’re not very familiar with Japan, you might be surprised to learn that Japan has a thriving bread culture, with thousands of independently owned bakeries dotting neighborhoods around the country. Portuguese missionaries planted the early seeds of this booming bread culture, and to this day, the name for bread in Japan is pahn (パン), from the Portuguese word for bread (pão). In more recent history, German, British and French bread cultures have played a part in shaping the bread scene here. Sandwich bread, in particular, is called shokupan(食パン) and has a distinct shape and texture that make it pretty unique.

The texture is pillowy soft and fluffy, and yet when you bite into it, it has a resilient bounce that gives it a pleasantly chewy texture, which makes it more substantial and satisfying than most sandwich bread. Because it’s often made using some milk, it has a rich flavor and tender moistness that makes it a pleasure to eat unadorned. Finally the lidded loaf pan it’s baked in, gives it a perfect square shape, which makes it well suited for making sandwiches.

If you can’t find Japanese-style sandwich bread near you, Pain de Mie will make a decent substitute, or if you’re really in a pinch, Wonderbread will work as well. 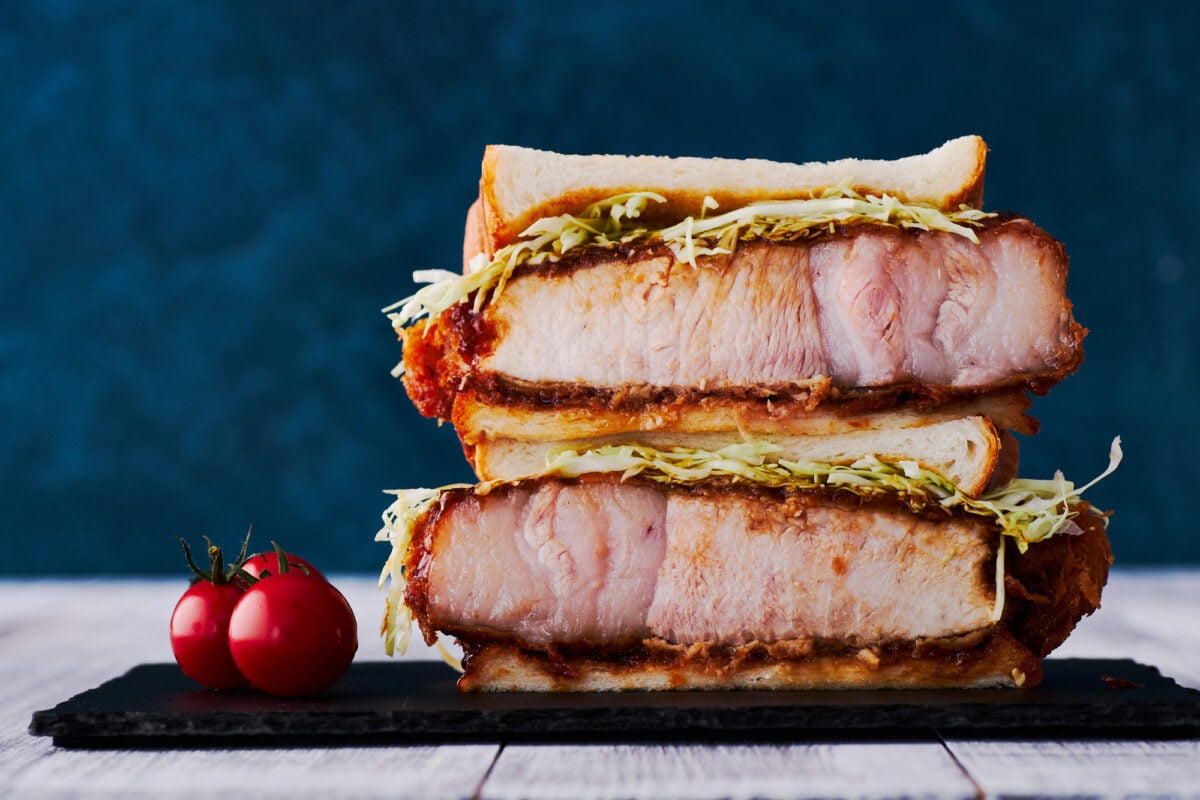 For a long time, I was of the school of thought that Tonkatsu sauce is something you buy, in the same way, that you’d buy soy sauce or mustard. But it can be a bit hard to find outside Japan if you don’t live in a big city, so I decided to try and make a sauce using ingredients that are available anywhere.

I’m still not sure I’d take the time to make it entirely from scratch(i.e., without including other sauces), but after developing the sauce for this Katsu Sandwich, I won’t be using the store-bought stuff anymore.

My sauce starts with a base of sake and apple juice, which gets boiled down into a thick syrup. The sake adds a boost of umami to the sauce, while the apple juice lends a fruity sweetness that’s the hallmark of Tonkatsu sauce. Soy sauce, ketchup, and honey provide the balance of savory and sweet, and Worcestershire sauce contributes to the flavor of sweet spices, along with a moderating tang.

Tonkatsu and cabbage go together like tea and crumpets, so it’s only natural that some shredded Brassica Oleracea goes into this sammie. I like adding it unadulterated, but if you wanna get fancy, you can turn it into some kind of slaw. Just stay clear of the mayo!

How to make Katsu Sando

Most of the work here lies in making the Katsu (not that it’s that much work), so if you haven’t already, check out my recipe for Tonkatsu! The sauce is just a matter of reducing some ingredients in a saucepan, and the only key in assembling the sandwich is to make sure you sauce the Tonkatsu right as it comes out of the fryer, so you don’t lose the crispness of the breading. 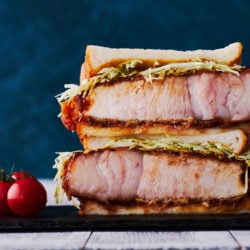 If you enjoyed watching this, please let me know by heading to my YouTube Channel and giving this a like👍🏽, Subscribing to my channel, and leaving a comment to let me know what you think. These videos take a ton of time to produce and hearing from you is the best motivation to keep me going.