While most people picture a vermilion hue and fiery heat when the word “kimchi” is thrown out, did you know that kimchi used to be “white” before chili peppers were introduced to Asia from the New World by the Portuguese in the 1600th century?

Making kimchi was historically a way for people to preserve vegetables for the long harsh Korean winter, before the advent of modern refrigeration. With the introduction of chili peppers, it didn’t take long before people figured out that the capsaicin in peppers had an antimicrobial effect aiding in preservation, while adding a little spice to the bleak winter days.

In many ways, kimchi’s development parallels the development of similar preservation methods in other regions of the world. But while pickling has fallen out of favor in the West, Koreans have elevated the process to an artform, and in doing so, kimchi has become a part of Korea’s national identity.

With hundreds of regional and seasonal variations, it’s a requisite part of any meal. Even fast-food chains such as Lotteria (the #1 chain in South Korea) get in on the act, with menu items like the kimchi burger. During the great kimchi crisis of 2010, when bad weather created a shortage of cabbage, restaurants did the unthinkable and started charging people for kimchi, leading the media to describe the situation as “a national tragedy”

These days, most young city-dwellers buy packaged kimchi, but for the older generations and those in rural areas, the baechu (napa cabbgage) harvest in late fall/early winter signals an annual ritual where extended family and neighbors gather to make giant bins full of kimchi. Although napa cabbage can be grown year-round, it’s the gigantic heads of cabbage with thick white stems made sweet with the chill of fall, that make the best kimchi.

Baechu kimchi is traditionally made by stuffing a spicy mixture of shredded veggies and herbs between the leaves of a whole head of cabbage. Some might call it sacrilege, but to save time (and because I really don’t need 10 pounds of kimchi), I usually buy a half head of napa cabbage and cut it up into pieces. After soaking the cut cabbage in brine overnight, and tossing it together with the other ingredients, it’s ready to eat almost instantly.

Personally, I love kimchi at all stages. On day one, it starts out like a salad, with fresh crispy cabbage and much of the heat coming from the raw garlic and ginger. As the kimchi matures, the flavors meld together, the harsh spiciness of the garlic gives way to the lingering sweet heat of the gochugaru. By the time the kimchi has reached the tail end of it’s ripening, the lacto-fermentation process renders the kimchi mouth puckeringly tart, the perfect stage for making Kimchi Jjigae

While the best way to store kimchi is in glass jars (be sure not to seal the lids), I find that double bagging them in Ziploc freezer bags tends to keep the kimchi smell somewhat contained, and it makes it easy to store in a small fridge. That said, kimchi has the uncanny ability to seep through even the most airtight of containers and imbue everything around it with the fragrant aroma of fermenting garlic and cabbage, that’s why I like to keep it outside in an ice chest (it’s below 0 C everyday during winter here) 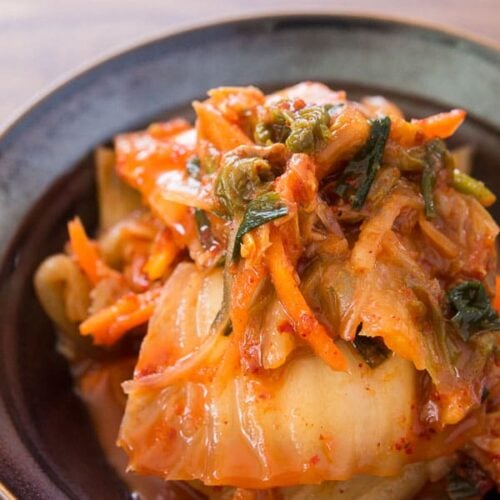