Whether it’s lox, or salt cod, humans have been preserving fish using salt for hundreds of years. While the methods and seasonings may vary, the basic idea of curing is to use salt to draw out water from the fish through osmosis. In the same way that dried fruit resists spoiling, reducing the water content of fish also slows the growth of microbes. The salt left behind further inhibits the growth of bacteria by drawing out water from the microorganisms themselves.

These days with modern refrigeration, we don’t have as much need for these preservation methods anymore, but the fact that they’re still around is a testament to the fact that curing makes food taste better. The main reason is that because you’ve lowered the water content of the food, the stuff that makes it taste good has been concentrated. The other reason is that salt has synergistic effects with umami producing compounds in the food, making the concentrated good stuff taste even better.

There are a number of ways to cure fish, and I’ve previously shared with you my method for makin lox, using a combination of salt, sugar and spices. One of my favorite methods uses a different technique called kobujimé developed in Japan before refrigeration to enable the transport of fish inland from the sea. The basic idea is to sandwich a fillet of fish with salt between two sheets of konbu (kelp). The konbu not only helps absorb some of the liquid coming off the fish, it also infuses the fish with glutamic acids, which helps to boost the natural umami from the inosine 5′-monophosphate(IMP) in the fish. While there are many foods (like tomatoes and corn) that are a rich source of glutamic acids, konbu also has the added benefit of being fairly neutral in flavor, allowing you to amp up the umami of a mild fish without obscuring its subtle flavor.

While you can make kobujime with any fish that’s safe to eat raw (see my post on that here), my favorite is Tai (red sea bream). It’s a delicate white meat fish that takes on a marvelously firm texture when cured, and because of its hefty dose of IMP, the taste is simply divine.

Once cured, you can use the kobujime for sushi, sashimi, or in a crudo such as the one I did above with ume paste, olive oil and salted konbu. Kobujime also works fabulously in ochazuke where the cured fish is placed on hot rice and covered with green tea, which extracts the umami from the Tai, creating a broth, while gently poaching the fish. 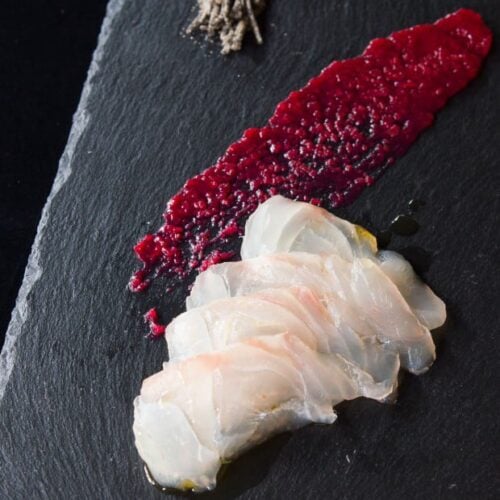