For most people in the West, Larb (Lao: ລາບ; Thai: ลาบ) is a associated with Thai Isan cuisine, but did you know that its origins are in Laos? One look at a map should clear up any confusion as the Isan region of Thailand sits adjacent to Laos and has a large Lao population. Although it’s a meat based salad, the preparation and seasonings make it taste light and refreshing, and yet it’s satisfying enough to be turned into a balanced meal with a plate full of fresh veggies.

Sublimely balanced between tart, spicy, savory and sweet tastes, and accented by the fresh flavors of mint and culantro, Larb is a perfect late summer dish along with a plateful of leafy greens and an ice cold beer.

While I see a lot of people stir-fry their larb, I prefer poaching the meat in a little galangal infused water. The galangal mellows out the porcine funk, while the low temperature cooking keeps the meat tender. Best of all, by draining off the excess water when the pork is cooked, you also drain off a lot of the excess fat, keeping this dish relatively light.

Another thing that often gets missed in Western interpretations of Larb is the Khao Kua (ข้าวคั่ว). Khao Kua is a coarse powder made from toasted rice that not only gives the salad a marvelous crunch, it also brings a nutty flavor that’s somewhere between popcorn and rice crackers. While it’s traditionally made in a wok on the stove, I prefer doing it in the oven because the rice browns more evenly and it doesn’t require any stirring. I usually make a big batch of this as it’s great on any salad, and having it on hand greatly reduces the amount of time needed to make a batch of Larb. When you make Khao Kua, please be sure to use long-grain sticky rice for this. I’ve tried it with other types of rice and they tend to be much harder and leave a gritty texture in your mouth.

You can make Larb with any kind of ground meat and you could even do a vegan version with a vegetarian meat substitute and soy sauce in place of the fish sauce. As for the less common ingredients, culantro(pictured below) is a saw-toothed leafy herb that’s commonly used in Southeast Asian as well as Latin American cuisines. Although it’s in a different genus from cilantro, it does have a similar taste, so if you can’t find it near you, you can substitute cilantro.

Galangal is a root that looks a bit like ginger but has a taste like Sarsaparilla (i.e. root beer), if you can’t find it, you can omit it, or substitute ginger (though it will have a different taste). As for the lemongrass, it’s becoming easier to find in upscale western supermarkets, but if you can’t find it, just skip it, as there’s no good substitute.

Nothing about this salad is hard to do, but you need to have all the prep done as the pork cooks in a matter of seconds. 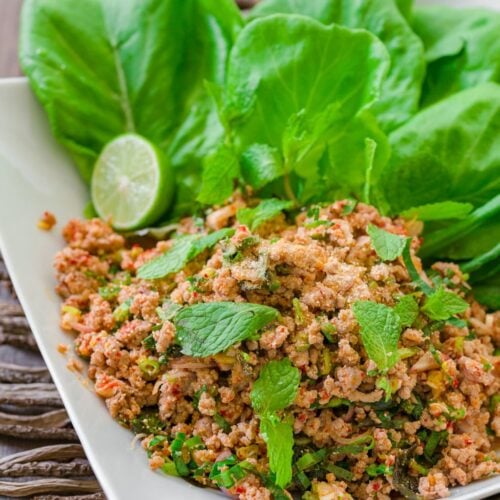