One of the great things about Thai food are the rainbow of different curries, from yellow to red to green, each with their own unique flavors and character. But despite my love of Thai curries, my undisputed favorite is Massaman. Its use of ingredients not commonly found in Thai food such as potatoes, cardamom, cloves and allspice gives it a distinct flavor that’s truly addicting.

Like most foods, Massaman curry has many creation myths about where, when, and by whom it was created. One theory is that “Massaman” is an evolution of the term Mussulman, which is an archaic name for Muslims. Another theory posits that the name was derived from the Malay word for sour (“masam”), presumably due to the tangy tamarind juice in the curry. One thing that isn’t disputed is its Muslim roots, which is why Massaman curry is never made with pork. Whatever it’s origins, the unique blend of Persian spices with Thai aromatics, along with a nuanced balance of sweet, savory, spicy and sour tastes makes for a singular curry with a depth and complexity unlike anything I’ve ever eaten before.

While Massaman can be made with almost any kind of meat, I personally like to use large sinewy chunks of beef. By simmering the curry slow and low, it not only gives the flavors a chance to meld, it also renders the fat and connective tissue in the beef into a satiny smooth lubricant that makes each piece of meat melt away into its constituent fibers in your mouth.

As for the chili peppers, I like to use dried red chilies that are fruity and a bit sweet with a balanced heat that isn’t crazy spicy (you can always add cayenne pepper later if it’s not hot enough for you). For this batch, I used guajillo chilies, but you can use any dried chili available in your part of the world, that fits the description above, such as Aleppo, or Korean chili peppers. 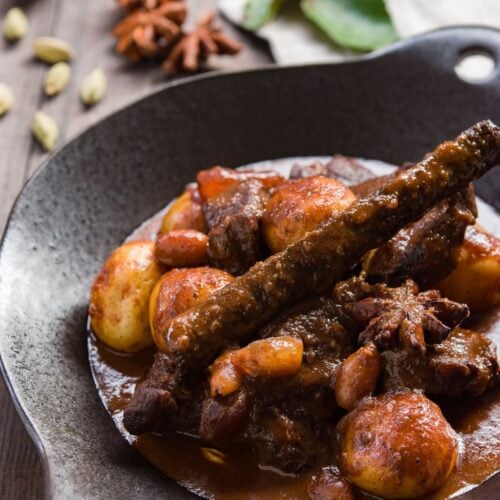