Nikumiso(肉味噌) literally means “meat miso,” and it refers to a condiment that’s made by caramelizing miso, sake, and sugar around ground meat. It’s commonly eaten over rice or used for dipping vegetables, but it’s also delicious stuffed into fried eggplant. You can check out my Nikumiso recipe for more details on how this condiment is typically eaten.

What is Nasu Dengaku?

Nasu Dengaku (なす田楽) literally means “eggplant cooked dengaku style,” and it refers to the resemblance of the original dish to an ancient dance that dates back over 1300 years ago. The dish was developed around 1000 years ago as a street food where skewered tofu was grilled and glazed with sweet miso sauce. Making it with eggplant is a relatively modern creation, and the eggplant is typically fried before being slathered with dengaku sauce. For a more traditional version of this dish, check out my Pan-Fried Nasu Dengaku recipe.

What kind of eggplant do you use for Nasu Dengaku?

In Japan, eggplants come in many shapes and sizes, and Miso Eggplant is usually made with round varieties such as Beinasu (American Eggplant) or Kamonasu (Kamo Eggplant). It can also be made with the more slender Japanese eggplants, but I prefer the more meaty varieties for this dish. 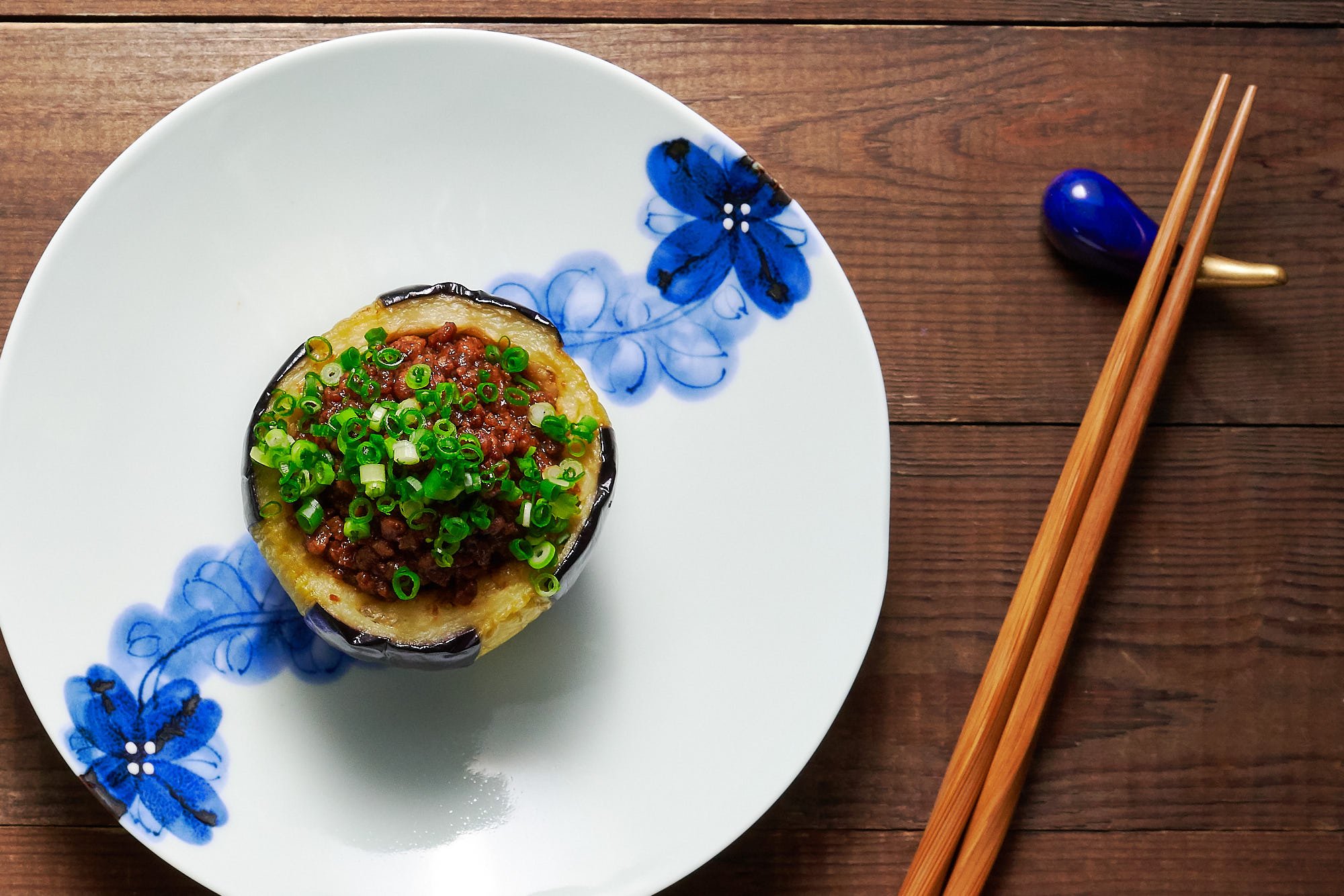 What kind of Miso do you use for Miso Eggplant?

I like to use Hatcho miso for making Dengaku as it has a beautiful chocolate brown color and a complex earthy flavor. This is due to the two-plus years it spends aging in wooden barrels. Other styles of miso, such as red miso and yellow miso, will also work, but I don’t recommend using miso meant for making instant soup as these usually have dashi and other ingredients mixed in. Good miso should only contain soybeans, rice or barley, koji, and salt.

In short, no. However, this Nikumiso Dengaku can easily be converted by swapping the ground pork out for your favorite plant-based protein. TVP and my Vegetarian Ground Meat made from frozen tofu are both great options.

How do I make Stuffed Miso Eggplant?

There are three components to this dish: the dengaku sauce, the fried eggplant cups, and the filling. To make the sauce, you just have to whisk the sugar, sake, and hatcho miso together.

To prep the eggplant, it gets peeled with alternating strips of skin left intact, so you get the nice purple color, but it’s easy to eat as well. Then you can use a spoon to carve out the center of each piece of eggplant to make a cup. These get deep-fried until tender. I know someone is going to ask, so if you don’t want to fry the eggplant, you can steam them until tender. They won’t be quite as creamy, and the eggplants will lose their purple color, but it will still taste great.

For the filling, it’s just a matter of sauteing the ginger and then crumbling in the ground pork, and then caramelizing the dengaku sauce around the meat. This gets stuffed into the fried eggplant, and it’s ready to serve. 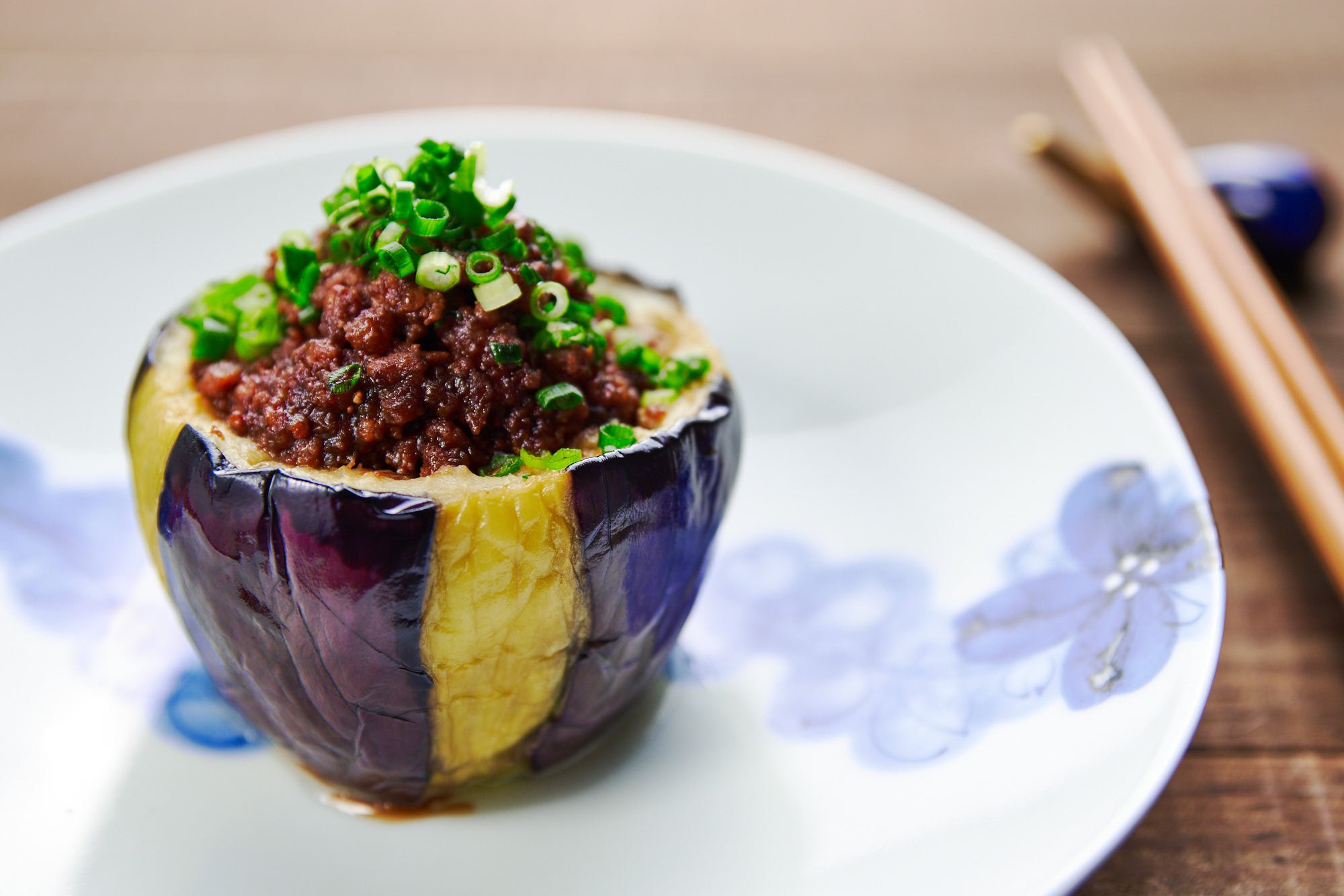 Can I make Stuffed Miso Eggplant ahead of time?

You can prep and stuff the eggplant and then store it in the fridge for up to a day. Then it’s just a matter of reheating it in the microwave. If you’re planning on making this ahead of time, I recommend holding off on garnishing it until you’re ready to serve it (after it’s been reheated). 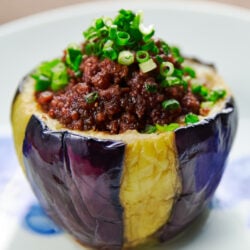