Miso Glazed Eggplant is a popular dish during summer and fall, which was traditionally prepared by grilling eggplant and then glazing it with a sweet and savory miso sauce.

Most modern versions are made by either deep frying or pan-frying the eggplant. The former tends to get greasy, while the latter tends to leave the eggplant watery and mushy. In my recipe, I roast the eggplant in the oven before glazing it with the Dengaku Miso and popping it back into the oven to caramelize.

How to Make Miso Glazed Eggplant

To ensure your eggplant sits flat, set it on a flat surface and let it roll until it comes to a rest. Then, slice it in half lengthwise so that the bottom of each half will rest on its flat spot.

Use a sharp knife to slice around the edge of the skin about a half-inch deep. This creates a gap between the skin and the flesh that you can dig a spoon into when you eat it. Be careful not to slice through the skin.

Next, cut slits into the center of the cut surface of the eggplant in a cross-hatch pattern. This creates more surface area, allowing the eggplant to cook through faster. It also makes it easy to spoon out cubes of eggplant when you eat it.

For the dengaku miso sauce, add the miso and sugar to the mirin and mix it until it’s very smooth and free of any lumps.

Once the eggplant is cooked through, remove it from the oven and spread a thick layer of dengaku sauce all over the top. You want to spread the miso glaze into the crevices and right up the edge, but be careful not to spill any glaze onto the pan, or it will burn and make a mess.

Return the eggplant to the oven and let the miso glaze caramelize. This should take about 5-7 minutes but watch it closely as the glaze will burn easily.

When it’s done, garnish your Nasu Dengaku with some sesame seeds and scallions and serve while it’s still hot.

Other Ways to Use Miso

What is Miso Glazed Eggplant?

Miso-glazed eggplant, which is known as Nasu Dengakau (なす田楽) in Japan, is a dish that’s traditionally made by grilling eggplant and then glazing it with a sweet and savory miso sauce. The technique of grilling and glazing with miso is called Dengaku, and historically the preparation was more commonly used with tofu. Dengaku was originally the name of a ritual dance where the performer dressed in a boxy gown and stood on a long pogo stick-shaped pole. Since tofu on a skewer looks a bit like the dancer on a stick, this is where the dish got its name.

How do you pronounce Nasu Dengaku?

Nasu Dengaku is a 5-syllables and is pronounced as follows:

What to serve with Miso Eggplant

In Japan, Nasu Dengaku is usually served as an appetizer or side dish (such as at an izakaya); however, its meaty texture and robust flavor make it well suited to serve as an entre as well. If you plan to serve it as an entree, I’d recommend pairing this with some rice, along with some miso soup and sesame spinach.

This Miso Glazed Eggplant recipe is plant-based, so it is vegetarian and vegan-friendly. However, some versions of this dish can include meat or dashi, so if you have it at a restaurant, be sure to ask first. 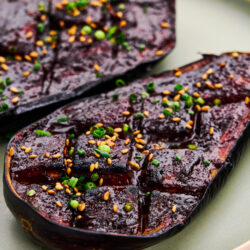