In a world where most clam chowders would be more aptly named “clam flavored potato soup”, finding a morsel of clam is like winning a Toyota Camry. It’s a feeling of elation that’s quickly tamped down by the realization that the rubbery clam is bland and tasteless.

That’s not a problem you’ll have in my version of the New England classic, as I include nearly 5 pounds of clams! Of course the problem with fresh clams is that they live in the muck at the bottom of the ocean, and so eating clams is often synonymous with eating sand. It’s a weakness of mine. For Superman it’s kryptonite, for others it’s the sound of fingernails scraping across a chalkboard, for me it’s grit in my food. Whether it’s an errant shard of egg shell or a grain of sand in in my clams, one bite is all it takes to ruin an otherwise delicious meal.

This aversion to chewing on dirt is the main reason why I avoided eating these succulent bivalves. That is, until I figured out a series of tricks to get rid of virtually all the sand in the clams. The first thing is to soak the clams in salt water, which will trick them into thinking they’re back in the ocean. After a while, the clams will open up and peak their little necks out, squirting out murky water and taking in the fresh salt water from the bowl. This gets the clams mostly grit-free, but like children, there are always the stubborn ones.

To ensure a truly sand-free experience, I steam the the clams open, remove the meat and then use the clam stock to rinse the clam meat. After letting the grit settle, you can skim the clams off the top, and then carefully transfer the stock to another container leaving the last bit of stock (and remaining sand) in the first bowl.

Once you have your cleaned clams, and clam stock, making New England clam chowder is simple. Bacon, onions, and potatoes are the only things that accompany the clams. Because the clams are steamed rather than boiled, the stock is concentrated enough that you can use milk rather than cream, which means less saturated fat with plenty of richness and flavor.

The resulting chowder is rich and creamy with tender clams and bits of smoky bacon in every bite. Crumble up some oyster crackers or hardtack when you eat it to add some body, and you’ll have a wicked good chowda fah suppaah. 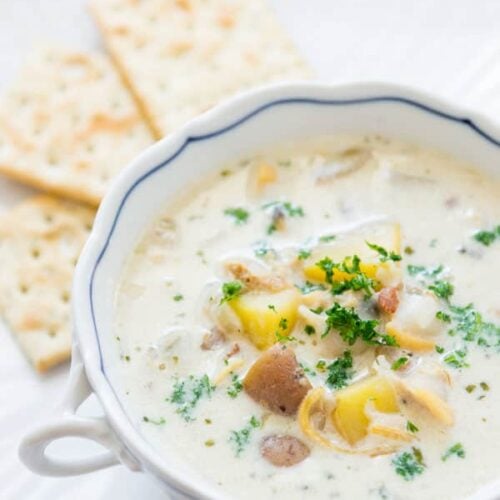 What do you think?28 Cancel reply