Soupe de Poisson(pronounced soup du pua-sohn) literally means “fish soup” in French, but in the US, it generally refers to Soupe de Poisson à la Sétoise, or fish soup in the style of Sète. Unlike its more well known sibling Bouillabaisse, Soupe de Poisson does not include any pieces of seafood and is more like a bique in that regard.

This isn’t a dish to make when you’re pressed for time, but with about a dollar’s worth of scraps from the fishmonger and a little love, you’ll be treated to a Soupe de Poisson that’s brimming with briny nuanced umami without so much as a hint of fishiness. Because the soup is strained and pressed before serving, it has a rich velvety texture from the collagen in the fish, making the soup taste almost creamy. The tomatoes lend a balancing sweetness and acidity while the anise notes from the fennel and savory saffron bring out the best characteristics of the fish. Together with crisp pieces of grilled bread slathered with rouille, Soupe de Poisson makes for a beautiful brunch alongside a salad, with plenty of crisp grilled bread slathered with Rouille.

There are a couple tricks that I’ve picked up over the years that I’ve employed, to take this soup to the next level. The first is to clean the heck out of the fish (in the photo above the half on the left has been properly cleaned). Basically anything even remotely resembling blood should be scrubbed, scraped and washed out of the all the parts of the fish before you cook it. That’s because the blood can taste bitter and have a fishy taste, both of which we don’t want in our soup.

The second trick is to cure and then roast the fish before adding it to the soup. This does a couple of things. The curing step, reduces the water content of the fish, concentrating its umami producing amino acids. The roasting step takes advantage of the Maillard Reaction to rearrange those amino acids into thousands of new flavor compounds, adding depth to the soup. The roasting also renders out most of the fat in the skin and meat, which is a good thing for the soup, because the oils in the fish can also have a fishy taste.

The cooked soup gets passed through a strainer to remove the solids, which would normally be discarded, but I like to add water to the strained solids and briefly cook it, before straining, to extract every last bit of flavor before discarding.

As for the type of fish, you can use whole gutted fish, but I like using the trimmings from fish that have been filleted because you tend to get more flavor, as well as richness adding collagen from the bones and connective tissue. I’ve used the trimmings from Red Sea Bream, but any umami rich-fish such as Branzino (a.k.a. Loup de Mer), Horse Mackerel, or Red Snapper will work. 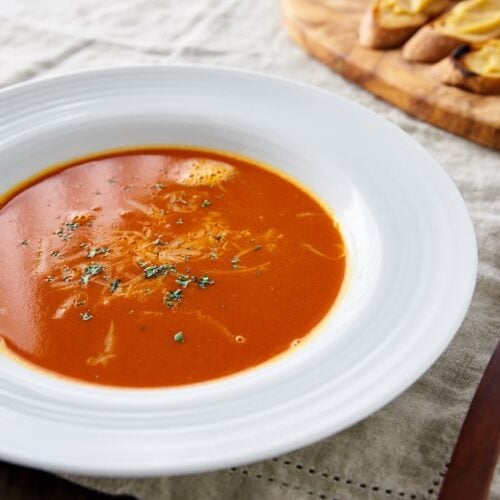