What is Pancake Cereal?

Pancake Cereal is a viral trend that started on TikTok. They’re just regular pancakes painstakingly miniaturized and served in a bowl instead of a plate. I say pain-staking because flipping a pan full of regular pancakes can be a pain, but try flipping several pans of M&M-sized pancakes… You get the idea.

The other problem is that they’ll turn to mush the moment you try to add milk to the bowl. These two flaws have relegated Pancake Cereal to a one-time novelty for most people, but I wanted to see if I could turn this craze into an actual breakfast cereal that could be eaten with milk, and that doesn’t require a ridiculous amount of effort to make

How to make Pancake Cereal

Aside from having maple syrup in it, making this batter is identical to making regular pancakes. The difference is in how it’s cooked. Instead of cooking them on a griddle, This cereal is baked in the oven until it’s crisp.

To make the batter, you want to start by whisking together all of the dry ingredients (chickpea flour, baking powder, baking soda, and salt). If you notice there are clumps in any of your dry ingredients, you may want to sift them all through a strainer to prevent lumps in your batter.

For the wet ingredients, I like to beat the eggs and melted butter together first, because egg yolks contain lecithin, which helps emulsify the fat in the butter with the other liquids. Then you just whisk in the milk, maple syrup, and yogurt.

The wet ingredients get poured into the dry ingredients, and then you just need to mix this together until it’s nice and smooth. Since chickpea flour contains no gluten, don’t be shy about whisking the batter thoroughly as you don’t want any lumps in it that may clog the squeeze bottle.

Next, you just load the batter into a squeeze bottle and squeeze it into little droplets on a parchment paper-lined baking sheet.

Then you can pull the pancake cereal out of the oven and let it cool completely. It won’t be crisp when it’s hot, but it should crisp up as it cools. If it doesn’t crisp after it’s cooled, you can put the cereal back on a sheet pan and bake it in a 200 degree F oven until it’s crisp. 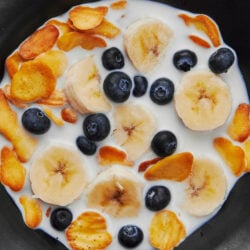