I’ve been back from Barcelona for less than a week, and I already miss it terribly. Everything from the meandering back alleys steeped in history, to the azure blue sky, welcomed me with open arms and then held me tight when it was time to leave. Despite my poor grasp of Spanish and non-existant Catalan, the people were patient and always there to help.

These factors made for a good trip, but the thing that left me fantasizing about quitting my job and staying, was the food. It’s simple, full of flavour, and tastes comfortably like home. While there are many delicacies that I won’t be able to nosh on until my return, patatas bravas are both easy to make and deeply satisfying. The preparation varies by region, but the Catalan version of this tapa is covered in a piquant olive oil mixture and silky smooth allioli. Put simply, it’s a match made in Heaven.

Knowing my fervor for potatoes and all things fried, I sought out the best patatas bravas while in Barcelona. Many of the English language websites and forum posts seemed to point towards Bar Tomas, so on my first full day there, I hopped on the FCG north to check out the legend. Situated on a corner in a quiet residential neighborhood, it’s the kind of place you’d pass by without a second thought if it weren’t for the line of people coming out the door. The setup is pretty typical of a tapas bar and involves squeezing in between some people along the narrow counter and catching someone’s attention just long enough to rattle off your order. Since this was just the first stop on a longer food crawl, we went for a single order of patatas bravas and croquetas.

I’m not sure if I was expecting too much, or if they were just having an off day, but the patatas bravas didn’t live up to all the hype. They were soggy, greasy and tasted more like they were poached in oil rather than fried. The only thing that saved it from being filed in the unmemorable bin was the luscious white allioli melting all over the top of the potatoes. Put simply, it was one of the best condiments I’ve ever tasted; high praise coming from someone who doesn’t care for mayonaise. It was creamy and intensely garlicky, without being cloying or harsh. What set this allioli apart from any I’ve had back home was the lip-smacking umami that flooded my taste buds as the smooth white sauce dissipated across my tongue.

If you’re in the US you may know allioli by it’s Provençal name, aioli. In Catalan, all i oli literally means “garlic and oil” and is the preferred sauce for patatas bravas in the region of Catalunya. Traditionally made by grinding garlic and olive oil together with a mortar and pestle, modern versions add egg yolk as an emulsifier to help the garlic and oil mix together. For my rendition, I’ve added some lemon juice and honey help balance the salty richness of the allioli. It doesn’t quite have the same level of umami that Bar Tomas’ version had, but it comes close. My guess is that the flavour in Tomas’ allioli is either coming from some grated cheese, or they’re using some kind of animal fat instead of olive oil.

This combination of duck fat fried patatas with the pungent allioli makes for a tasty take on this classic tapa. The spuds take on a crackling crisp exterior with a soft and steamy interior, and each golden brown morsel is brimming with umami thanks to the rendered duck fat they fry in. They’d be delicious with the sea salt, pimentón and olive oil, but the freshly emulsified allioli that crowns this mound of carbs takes the dish from humble to sublime. 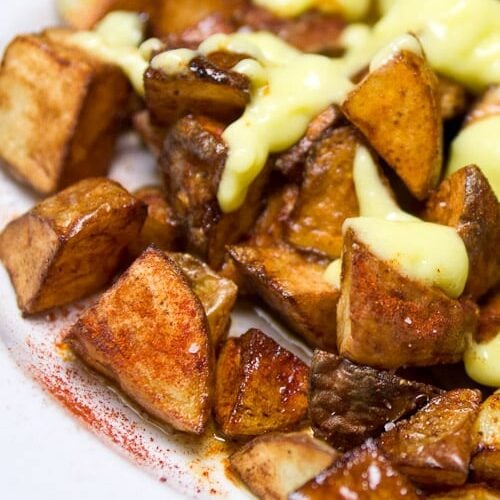 What do you think?56 Cancel reply