A great chef once told me that if a recipe isn’t working out, then take an ingredient out. The lesson being, that if you’re using fresh, wholesome ingredients, simple is almost always better. That’s why most of my cooking tends to be simple. But as with any rule, there are always exceptions.

French pastries are delectable, yet require an enormous amount of effort. Whether it’s my laziness or my lack of experience in the pastry arts, I prefer buying pastries prepared for me by an expert, rather than do something crazy like tackle an opera cake myself.

Tamales are another exception to the simple is better rule as they require an immense amount of prep-work to make. While the slacker in me would love to just go out and buy them, the ones from stores and restaurants (yes even if you live in a border state) are a far cry from the airy masa-wrapped delights that I’ve had in the past.

When I was a student at UC Davis, there was a tamale lady at the farmer’s market that had delightfully light tamales with a sweet and tangy sauce. The first time I had one of her tamales it made me realize why people loved these giant dumplings with such fervor. Like a gambling addict, I’ve been hooked ever since and I toss the dice and order tamales whenever I see them on a menu.

Unfortunately I can only count a handful of times when I’ve been happy with the tamale I’ve ordered. Dense, leathery, and tasting of old meat, I usually find myself swearing off store bought tamales for good. Still, it doesn’t take me long to forget the long odds and I inevitably set myself up for disappointment every time I dine at a Mexican restaurant.

Recently I decided that enough was enough, and I set out to make my own perfect tamale. It took me a whole day to make, but trust me on this one, it’s worth the effort. The filling strikes the perfect balance between rich and tangy, savory and sweet, with a slow heat that builds with each mouthful, and despite containing over a cup of lard, the corn masa is impossibly light and fluffy. Draped with a fresh tomato and chili salsa, this steamed corn dumpling embodies all the things that I love in a great tamale.

To get there, I started by braising a pork shoulder with aromatics and spices until the meat was fall-apart tender. Then I used the resulting pork stock, along with dried Guajillo and Pasilla chiles to make the mole. The chiles are spicy but are really there more to impart their sweet fragrance rather than provide face-melting heat. Together with the pork, caramelized onions, and herbs, the sauce and meat have layers of orchestra-like complexity that will make everyone at the table utter a deep “Mmmmm” as their mouths close around their first bite.

For the masa, I used the recipe on the side of the package (Maseca brand), but instead of water, I used the remaining pork stock to rehydrate the flour. This adds enough flavor that you could really just steam the masa by itself without any filling at all. The most important thing though is to use a stand mixer to whip the lard, this incorporates a ton of air, which is what gives the finished tamale such a light texture.

By the way, these tamales also work really well filled with a batch of my chile verde recipe. The process for the masa is basically the same, but you won’t have the braising liquid, so you can use something like chicken stock. 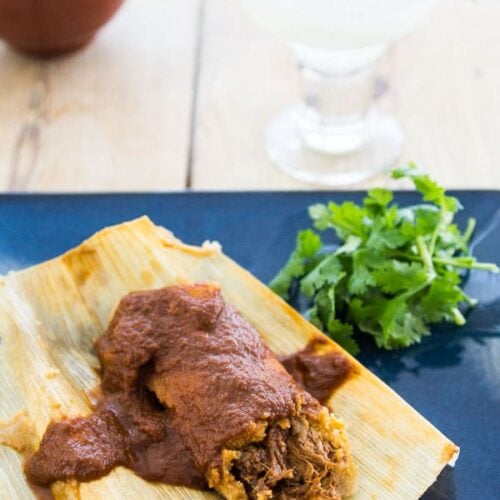 What do you think?47 Cancel reply