Growing up in the US, bamboo shoots were a food you bought in a can, and aside from a passing acknowledgement that they were related to the tall green stalks that pandas eat, I never really put much thought into how they’re grown or how they’re prepared. One time, I found some fresh bamboo at a Chinese market and decided to try it out.

Peeling the tough exterior sheaths to reveal the pale tan interior reminded me a bit of an artichoke, and I decided to fry them up with some olive oil, garlic, salt and pepper. Lightly caramelized around the edges and redolent of garlic they looked great, but after a few bites I realized something was not right. Although it had cooled, the bamboo felt like it was burning my esophagus going down and left me with a bad case of heartburn. Luckily I ended up throwing most of it out. I say “luckily” because it turns out bamboo contains some potent toxins that need to be neutralized before it can be eaten safely.

Like casava (aka tapioca) Lima beans, sorghum and flax seeds, bamboo naturally contains cyanogenic glycosides that break down in the gut to produce cyanide. In the case of bamboo, the compound is called taxiphyllin and although the concentrations vary by species, it’s a very bad idea to eat improperly prepared bamboo. The good news is that unlike, most cyanogenic glycosides, taxiphyllin decomposes readily when heated over time, rendering it perfectly safe to eat.

In Japan, early spring is a forager’s delight, as the snows melt, and a bounty of wild mountain vegetables start poking their way through the forest floor. This is around the time that Bamboo shoots, or takenoko (竹の子, literally “bamboo child”) start showing up at markets and although you can get the prepared kind vacuum sealed in water year round, there’s some primal satisfaction of foraging for, and preparing your own. When foraging for bamboo (like all wild vegetables) be sure you know what you’re doing as there are only certain species of bamboo that are edible.

As for the preparation process, it’s fairly simple. You just peel and trim them and boil them in water for two hours before soaking them in clean water overnight. In Japan nuka, or rice bran (the stuff that’s milled off of brown rice), is usually added as it’s said to absorb the toxins. I haven’t done enough testing to be able to say for certain that it helps, but the claim sounds dubious since it’s the heat and time that breaks down the toxins. Still, who am I to argue with people that have been preparing it this way for generations. 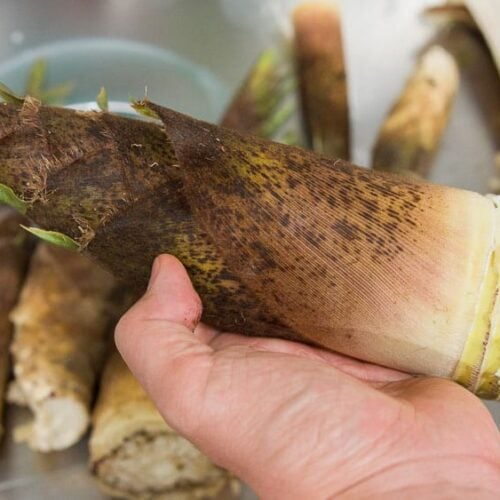