Between a crazy work schedule and an unusually warm autumn, a lot of what I’ve been doing recently has been quick and relatively easy. But with a sudden drop in humidity, and a chill that’s settling in for the winter, I found myself with a bit of time and a big desire to tackle a project that I’ve been meaning to do since I shared my Quick Meat Sauce recipe three years ago. A real slow-cooked Ragù Alla Bolognese… or at least my version of it.

Before I get into the details of my Bolognese, it’s time for a little food history. Like Chinese-American cuisine, the Italian-American repertoire has evolved into its own unique style of cooking with headliners like chicken parmesan and spaghetti and meatballs, that have roots in similar Italian dishes like parmigiana di melanzane(made with eggplant rather than chicken) and polpette(served without spaghetti)

If you’re living in the US, then you probably associate Ragù with a brand of jarred sauces owned by a Japanese company, and Bolognese with a meat sauce that’s served with Spaghetti, but in Bologna (or more specifically Imola) where Ragù Alla Bolognese is thought to originate, it’s a local meat sauce that’s almost always served with tagliatelle. If you think about it, it makes a lot of sense, as the flat noodles are much more adept at hanging onto the tender bits of minced meat in their loops and folds than slick, cylindrical spaghetti.

The ingredients and methods for making ragù vary widely depending on where you happen to be in Italy, but regardless of where you are in the “boot”, it’s always a sauce where the primary ingredient is meat. In fact many regions don’t even add tomatoes to the sauce, and the regions that do (like Bologna), use tomatoes as a seasoning rather than the base. Put another way, Ragù Alla Bolognese is not a red tomato sauce with meat in it, it’s an earthy burnt-umber meat sauce with a little tomato flavor.

I know these photos are probably making you pretty hungry, but before you decide to tackle this project, make sure you have a bit of free time as this really is a project. With an hour of active prep and cooking involved and another two hours of passive cooking, you should plan to spend the afternoon in the kitchen. That said, there’s nothing difficult about any of the steps and you’ll be rewarded with a truly hunger-inducing aroma that smells exactly how you’d imagine an Italian nonna’s country kitchen would smell after a day of cooking. Meaty and complex, and yet warm and sweet, it’s the kind of aroma that makes me want to snuggle to it, if such a thing were possible. 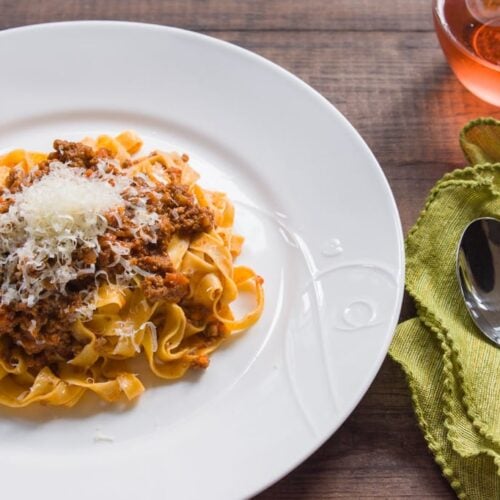