Dry and leathery aren’t usually things you want to hear about a roast chicken, but that’s exactly how the chicken needs to look in order to get a crisp-skinned roast chicken. Before you write me off as crazy, allow me to explain.

This summer, I spent a few weeks cooking at a mountain retreat for some of the top names in business and politics. The team I was working with was awesome, and despite an impressive line-up of guests, the first week went off without a hitch. The guest list for the second week was equally impressive, but there was one name that stood out. This is a guy that’s been king of the hill in both the private and public sectors, and someone most of you have probably seen in the news at one point or another. Let’s just call him Mr. G (not an initial). Mr G’s profile included some notes specifying he prefers wine over dessert, and that he likes his bacon burnt and his chicken crispy.

I pride myself in being able to make a tasty roast chicken, so when I was asked to prepare 7 roast chickens for dinner that night, my first thought was “no problem”. But roasting chicken usually involves a choice between crisp skin or moist, flavorful meat and my chicken veers towards the latter. Confidence wavering, I started to think about all the other things that could go wrong: the high altitude… the three different ovens I had to work with… This called for a revised method that would ensure the guests would be served a crispy skinned chicken.

As I mentally reviewed my chicken process, Mr G strode into the kitchen. Skipping pleasantries such as “hello” or “nice to meet you”, he looked me straight in the eye and said “Don’t screw up”. I can only assume it was meant as a joke, but you know what they say about jokes… Despite the thin mountain air, the pressure was on, and I started to rethink my chicken strategy.

My secret to moist chicken is to brine it first. This not only seasons the chicken to the core, it also helps the chicken to retain water, keeping the breasts nice and juicy. The problem is that in order to get the skin crisp, you have to drive all the water out of it. It’s a catch-22 that I’d always accepted as a necessary tradeoff to keep the breasts moist.

My first thought was to deep fry the chickens. A bath in hot oil is a foolproof way to ensure you end up with evenly crisped birds, but frying 7 chickens wasn’t going to happen on the equipment we had. I also considered using a dry brine or even skipping the brine altogether, but at the end of the day, Mr G was just one person in a group of elite guests and the tradeoffs involved just weren’t acceptable. That’s when I started thinking about the best crisp-skinned bird I’d ever had: Peking duck.

Peking duck involves a lengthy process of seasoning, drying, inflating, scalding, seasoning and drying again. Since ducks and chickens are different birds, and I wasn’t trying to make peking chicken, most of the steps didn’t translate to roasting a chicken. But there was one step that caught my attention, which brings us back to “dry and leathery”

You see, the secret to the shatteringly crisp skin on peking duck is to dry the skin out until it is dry and leathery. To achieve this with the chicken, I brined it just as I normally would, and then I dried it out in front of the evaporator in a walk-in fridge. While most of us don’t have a walk-in with an industrial evaporator, you can get the same effect by placing the chicken on a wire rack and leaving it in the fridge uncovered for a day or two. It’s going to look questionable, but under that translucent leathery skin lies some beautifully brined and juicy meat–perfect for a roast that’s crisp on the outside and moist on the inside.

Here’s what came out out of the oven:

A golden brown chicken with shatteringly crisp skin pulled taut by the juicy chicken inside. Like all good things, the moisture in the meat will eventually seep it’s way back into the skin making it lose its crispness. That’s why I skip the traditional 10-15 minutes resting period and opt to serve this caveman style… Just stick the whole bird on a platter in the middle of the table and arm all your diners with knives which they can use to hack at the chicken. Provided you don’t have any guests get into a knife fight over the same shard of skin, you should have a table full of happy diners and a carcass picked clean by the end of the dinner.

As for Mr G, I heard he took a second pass of the chicken, about as good of an endorsement as I could have hoped for short of him walking into the kitchen and giving me a pat on the back. 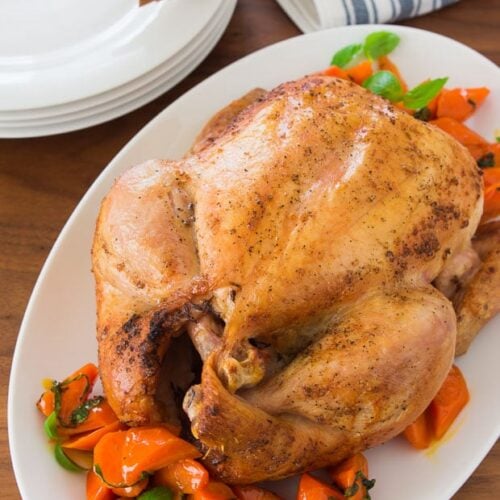