My first experience with Cong You Bing (葱油饼), or scallion pancakes was in Shanghai a number of years ago. I was staying in one of the city’s first boutique hotels, complete with a modern reclaimed wood interior. It was great, except within the confines of the hotel, I could have been in any city in the world. On my last day there I asked the front desk if there was a great place for scallion pancakes. The lady gave me a quizzical look as if sizing me up for the level of grit I was willing to put up with. Seemingly satisfied she called the porter over explaining that it’s a snack she hasn’t indulged in since she was a little girl.

Moments later I was in a cab being whisked through the streets of Shanghai headed further and further from the glitzy modern neighborhood I’d become familiar with. Just as I started questioning the wisdom of my inquiry, the driver pulled over and pointed across the street to long lineup of locals along a brick wall.

As I crossed the street, the heady aroma of fried dough and caramelized scallions caught my nose and reeled me in. After about thirty minutes in line, I reached a gap in the brick wall that looked onto the veranda of someone’s first floor apartment. On one side was a makeshift fryer made from an oil drum, and on the other, a small work surface where the guy making the pancakes was hunched over rolling out dough, while he took a drag from a cigarette hanging limply from the corner of his mouth.

I ended up getting a bag of 6 pancakes for less than a dollar. They were extremely dense and greasy and tasted of oil that had been recycled one too many times, but there was something about these cigarette ash sprinkled pancakes that stuck with me long after my visit and caused me to have cravings. Perhaps they were laced with opium, all I know is that when the mood strikes for some savory fried dough, a few scalllion pancakes is all it takes to slay the hunger.

Despite the name, scallion pancakes are actually more of a flatbread than a pancake. Made from unleavened dough that’s rolled into layers with scallions and oil, they’re crisp and flaky on the outside with a soft, chewy center. It’s this juxtaposition in textures along with the sweet fragrance of the caramelized scallions held within its folds that keeps you going back for more.

I think these are fantastic as is without any dipping sauce, but if you have to have a condiment, I recommend a 50:50 mixture of rice vinegar and doubanjiang for a tart spicy kick that offsets the sweetness of the onions and density of the pancake. 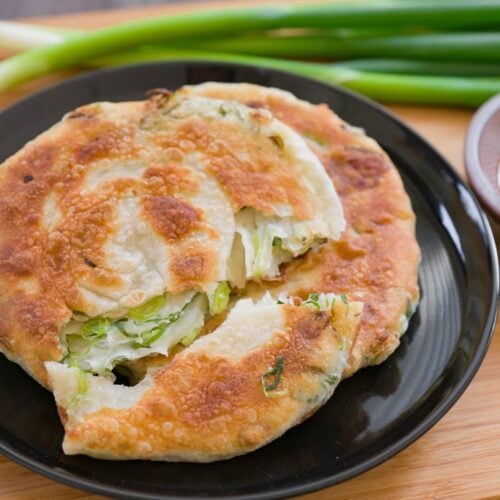